Madonna performs at KOKO in London 15 years ago today – a personal live report and video!

Fifteen years ago today Madonna performed a historical promotional gig at KOKO in Camden London. I was one of the lucky ones who was there.

I distinctly remember traveling to London in the cold without a ticket for the much talked about album launch at KOKO in London. At that point no information was

given whether tickets for the gig would be given out at the door or not. In a day and time without internet access on my phone I had to rely on the internet cafe’s in London to catch up on my Madonna news.

It was right in Piccadilly Circus, right near Boots where I remember paying for the use of internet and reading that fans were queuing up outside KOKO already. Tickets were indeed be given out to the first 200 fans who took the effort to go out and queue at the KOKO venue. Since it was freezing cold me and my friend decided not to queue this instant (even then I was rather lazy than cold) but to wait until the early hours in the morning. Happy but anxious at the same time we made our way back to our hotel.

Early morning we took the very first tube to Camden and from there made the long walk up to KOKO in the freezing cold. Quite a few fans had spent the night outside and we queued up behind them, I was a very respectable number 72 in the queue. We spent the time chatting to the fans in front of us setting out for a long and very cold day. You can imagine our shock when we were told that at only 11am we were already allowed to go inside and collect our wristbands and tickets to tonight’s performance. The crew told us it was then up to us whether we chose to queue again in order to settle for the best seats, or do as you please and come back a little before the doors were to open.

I remember right before I went in that various reporters were interviewing the fans outside and I was asked some questions too. Inside we were asked to write down our full name, address and phone number before we were granted our holy wristbands and tickets. We were told later that Guy Oseary had told fans all 200 there would be invited to the official UK premiere for Madonna’s ‘I’m Going To Tell You A Secret’ premiere later that month. We went home with the fans we met there to watch the Parkinson interview with Madonna before heading to our hotel for a beauty sleep.

We met up again at 3.30pm at KOKO to sit out the rest of our queuing, the queue was about the same as I had left it that morning. Many reporters came by again and also interviewed me on camera and I had absolutely no idea what it was for. I just remember answering to the questions asked ‘that it all was very very good.’ (see video)

When we finally got to go inside the tiny but beautiful venue we found a perfect spot at the right side of the catwalk of Madonna’s stage. The place reminded me a bit of Paradiso in Amsterdam, but much more intimate. The show was to be broadcast live so thank heavens for that as she started almost right on time! When Madonna emerged on stage……wow…..just wow!! The place went absolutely insane! I am sure you have seen the performance so I won’t need to explain why as Madonna was ON FIRE!!! If there is one performance of Madonna I have to label as flawless, it is without doubt this one. It was the first time I was treated to the new remix of ‘Let it Will Be’ (Paper Faces mix) and I was BLOWN away. The vibe you get from watching the broadcast…..it was even more insane being cramped up in there with your fellow fans and Madonna sticking her hand down her pants while rocking to that track. It was unreal, surreal, it was simply incredible.

When Madonna finished her performance with ‘Everybody’ (see our sneakily filmed clip from that track here) everybody was soaked with sweat. I remember a couple of fans trying to get Madonna’s used bottle that was left on the stage, but security was stern. While making our way out of the venue we found out there were posters and shirts on sale as well as a little ‘photo booth.’

Outside we ran into Bob Geldof and he agreed to take a photo. We took some posters and two of the disco ball tiles that were placed outside on the street. Our pictures didn’t turn out that well as we had the camera on the wrong setting, so instead of one Madonna most images produced two. The images are in the gallery below and are quite trippy. I tried to enhance them just a bit, but improving these is quite the impossible task.

Check out our album page HERE 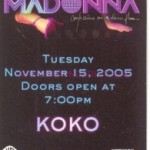 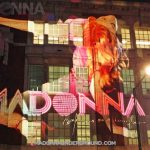 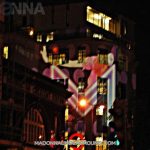 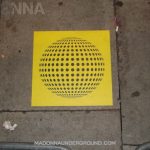 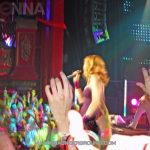 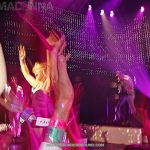 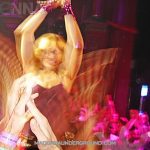 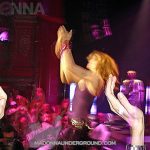 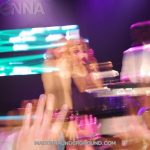 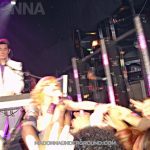 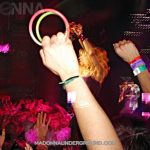 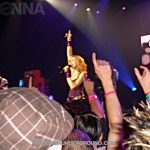 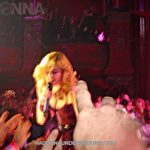 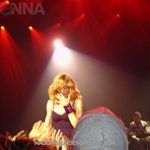 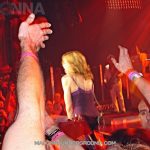 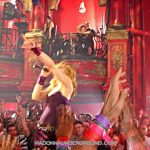 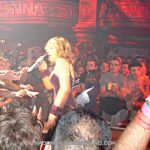 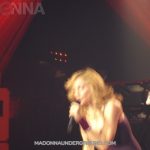 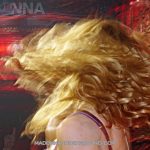 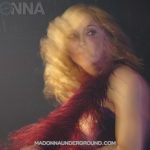 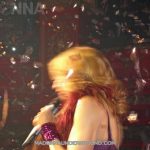 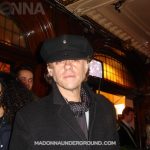 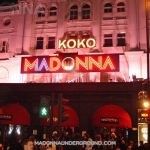 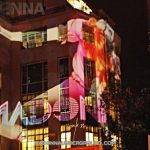