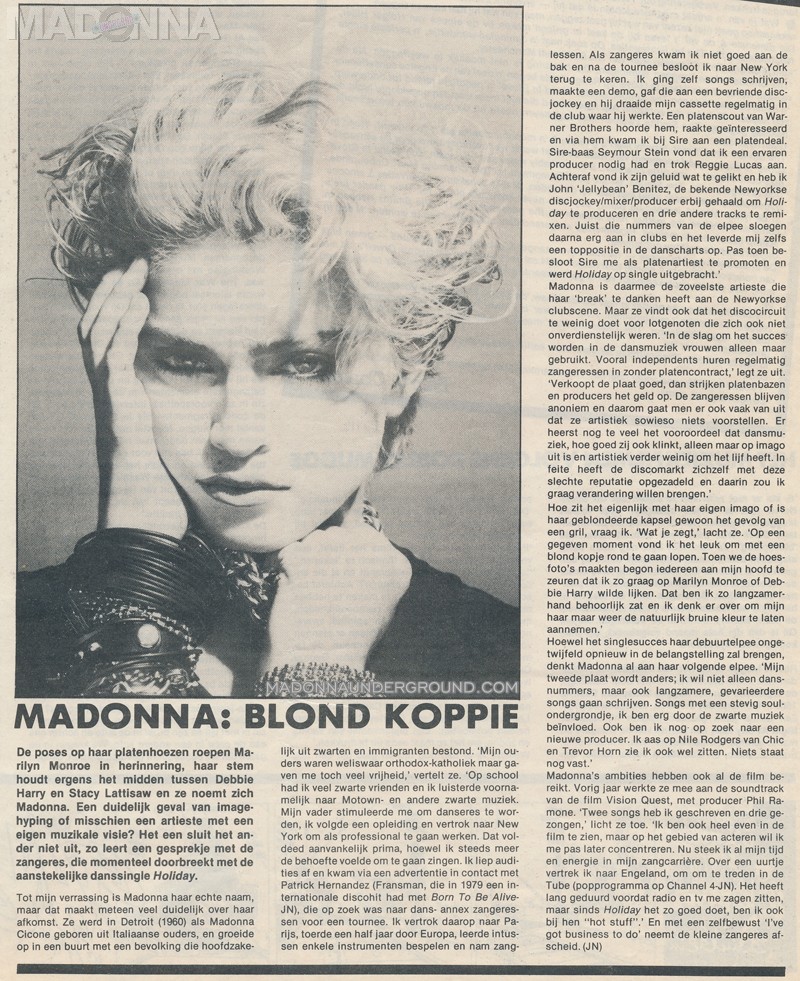 When Madonna first came to The Netherlands for promotion there were only a few interviews and one of those was published in Dutch OOR (ear) magazine on February 11, 1984. Besides the interview the same issue of OOR also includes the review for her debut album (stay tuned for the next post.) This article has been added to The First Album page.

English translation of the interview here:

The poses on her record covers recall Marilyn Monroe, her voice is a mix of Debbie Harry and Stacy Lattisaw and she calls herself Madonna. An obvious case of image-hyping or perhaps an artist with her own musical vision? One does not rule out the other, we learn while chatting to the singer who is currently breaking through with catchy dance-single Holiday.

To my surprise Madonna is actually her real name, but that clarifies her ancestry. She was born as Madonna Ciccone in Detroit (1960) with Italian parents and was raised with a population consisting mainly of blacks and immigrants. ‘my parents were orthodox-catholic but still gave me a lot of freedom,’ she says. ‘I had a lot of black friends at school and I mainly listened to Motown- and other black music. My father stimulated me to become a dancer, I followed an education and left for New York to do it professionally. That felt okay for a while, even though I felt the need to sing. I went to auditions and got in touch with Patrick Hernandez (Frenchman, who scored an international disco hit in 1979 with Born To Be Alive-JN)  through an ad, who was looking for dancers and singers for a tour. I left for Europe, learned to play instruments and took singing lessons. As a singer there wasn’t enough work and after a tour I decided to return to New York. I started to write my own songs, made a demo, gave it to a DJ-friend and he played my cassette occasionally in a club where he worked. A scout from Warner Brothers heard it, was interested and through him Sire got me a record deal. Sire-boss Seymous Stein thought I needed an experienced producer and hired Reggie Lucas. Afterwards I thought his sound was too slick so I brought in John ‘Jellybean’ Benitez, the famous DJ/mixer/producer from New York to produce Holiday and remix three other tracks. It was those exact songs that became a hit in clubs and landed me a top position in the dance charts. It wasn’t until then that Sire decided to promote me as a record artist and release Holiday as a single.’

That makes Madonna another artist who broke through thanks to the club scene in New York. But she also thinks that the disco circuit does too little for fellow artists who are not without merit. ‘In the battle for success women are merely used in the dance scene. Especially independents hire female singers without a record deal often,’ she explains. ‘If the record sells well the bosses and producers strike up all the money. The singers remain anonymous and therefore people assume they’re artistically uninteresting. There is still too much prejudice that dance music, no matter how good it sounds, is only out for image and artistically has little else to do. The disco market is responsible for their own bad reputation and I would like to change that.’

What about her own image or is her bleached haircut just the result of a joke, I ask. ‘What you say,’ she laughs. ‘There was a moment when I thought it was a good idea to bleach my hair. When we were shooting the album cover everyone was annoying me saying how much I wanted to look like Marilyn Monroe or Debbie Harry. I am getting really sick of that so I am thinking of growing back my own colour.’

Even though the single success will be positive for the promotion and sales of her debut record, Madonna is already thinking about her next record. ‘My next record will be different; I don’t just want to make dance music, but also mid-tempo songs. Songs with a solid soul-sound, I was very much influenced by black music. I am also looking for a new producer. I am aiming for Nile Rodgers of Chic and Trevor Horn as well. Nothing’s settled yet.’

Madonna’s ambitions have also reached the movie scene. Last year she worked on the soundtrack to Vision Quest, with producer Phil Ramone. ‘I wrote two songs and performed three in total,’ she explains. ‘I can be seen in the movie for a short while, but I would like to concentrate on acting later. I am putting all of my time and energy in my singing carreer. I am leaving for England in one hour to perform at The Tube (pop show on Channel 4-JN). It took quite a while before radio and TV noticed me, but since Holiday is doing so well, I am “hot stuff” over there too.’ And with a confident ‘I’ve got business to do’ the tiny singer says goodbye. (JN)