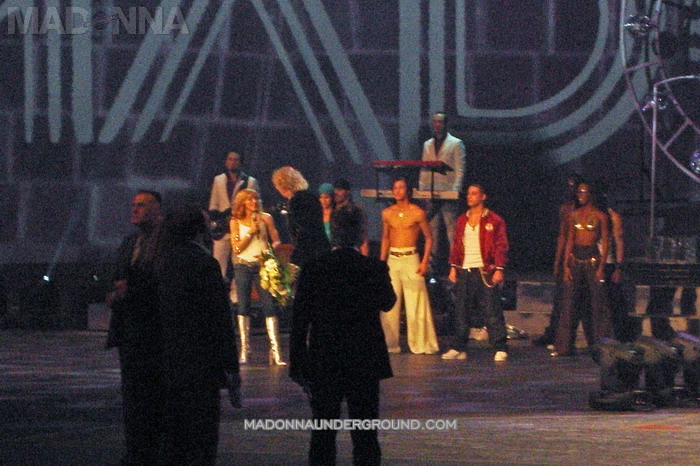 Fifteen years ago today I traveled to Mannheim Germany by train to try and attend the taping of Wetten Dass. You see, Madonna was planned to perform her new single ‘Hung Up’ and after seeing the MTV Awards performance I just HAD to be there.

I did not have a ticket, so there was no confirmation at all that I would actually end up seeing her, but sometimes in life you just got to take your chances.

It was a chilly day and after hours of traveling I went down to the studio’s to see if there were still tickets available. Well everything was closed and only a few Madonna fans with the same goal were keeping an eye on things. I decided to come back later when the doors would open.

Back again at the studio I joined the queue with the people who were there to pick up their reserved tickets. Once it was my turn of course there was no reservation in my name but I asked if they could be so friendly to check if there might be some tickets left for me. The German guy decided to help me out and told me to wait at the window. When he came back he told me I was very lucky as he had two ‘restricted view’ tickets left for me and my friend without a charge. I couldn’t believe my luck and was about to explode with joy.

I won’t be getting into details about the show because as you know ‘Wetten Dass’ is quite the production. We saw Madonna’s tour manager on stage right before she was about to perform, checking out things. The set up was similar to that of the MTV Awards performance but without the giant disco ball. The logo was projected on a huge screen behind the stage. The first thing I saw when she entered the stage was this silver jacket and silver boots, I remember thinking that I loved the MTV Awards outfit more.

Thomas Gottschalk announced her and the clock started ticking….’times goes by….so slowly’ and the audience went wild. Seeing Madonna perform at Wetten Dass was a dream come true, and seeing this particular song performed was the icing on the cake. We managed to snap some (good old fashioned) pictures with disposable camera, without having any idea how they would turn out. Madonna looked fantastic, she looked happy. When the song finished and dancer Cloud Campos had planted a very dirty handprint on her white outfit (that’s why you shouldn’t wear white) Thomas spoke a little to Madonna and handed her flowers. It was fantastic to see her again and I was so happy I took the gamble of going.

The rest of the show was meh. I remember seeing Shakira perform and Cameron Diaz sitting down for an interview, but that’s it. Our disposable camera pictures didn’t turn out so great (as expected) but after years of being online here in our photo gallery, I decided to try and enhance them just a bit. I will be writing little reports in the coming weeks to celebrate the 15th anniversary of this exceptional promotional tour, of which I was very lucky to attend.