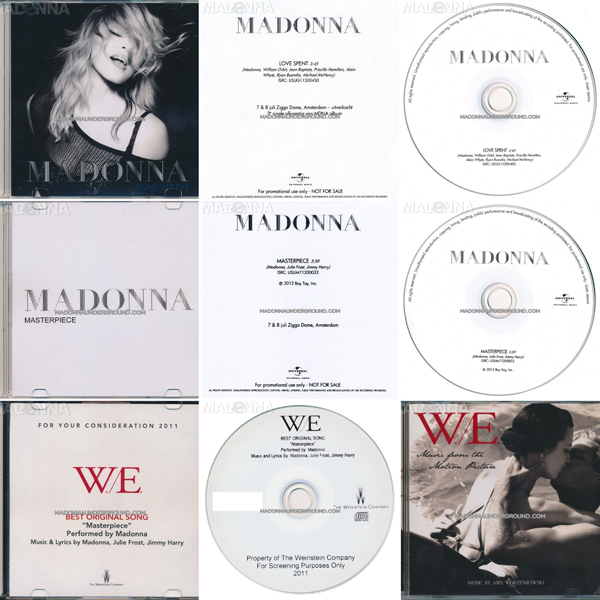 The confusion in single releases by Universal Music started after ‘Girl Gone Wild’ and has remained a pattern ever since.

Here in Holland ‘Love Spent’ was chosen as the album’s official third radio single, meaning it was the official single but wouldn’t be offered on digital platforms (and certainly no physical releases.) If people liked hearing the track on the radio (IF it was played at all) they needed to buy or stream the album track.

Love Spent was played at Radio 538 Maak ‘t of Kraak ‘t (Make it or Break it) but was voted out by 61%. The track was also added to the Radio 3FM PLUG playlist.

Then Universal Music decided to go for ‘Masterpiece’ as official fourth radio single, more so to promote the MDNA Tour at the Ziggo Dome and the Dutch release of W./E.

Universal Music NL press promotional CD’s of all their Dutch single releases which are sent out to radio and promoters. All of the MDNA singles were given the same treatment and therefore both Love Spent and Masterpiece ended up on extremely rare promotional CD’s. Both have since been bootlegged heavily, but when you know what they look like it is easy to spot the fakes:

Check out the MASTERPIECE discography HERE