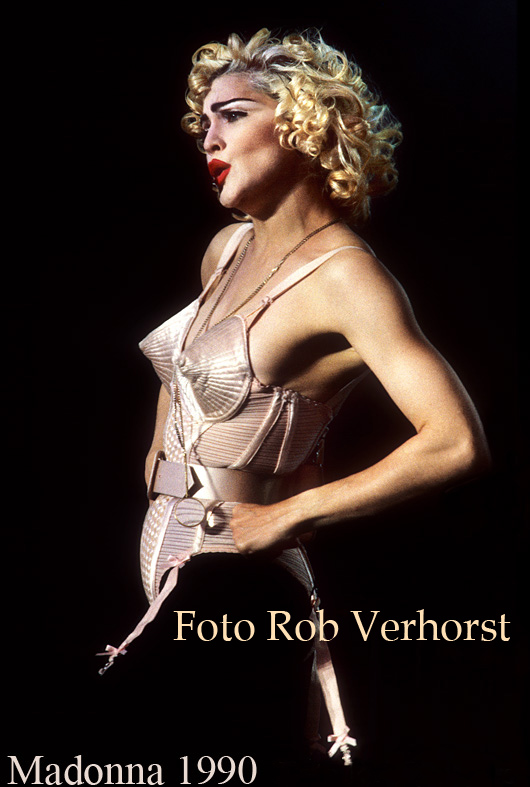 The greatest show on earth was about to take place in De Kuip Rotterdam. This was the second time Madonna played this stadium after previously selling out two Who’s That Girl Tour shows back in 1987.

Unfortunately the one and only concert in Rotterdam was close to selling out, but in the end ‘only’ 40.000 tickets sold.

The concert started in daylight and the crowd ate it up. Madonna seemed to be in a great mood and put on a hell of a performance. To everyone’s surprise Madonna invited a girl up on stage to dance with her after she presented Madonna with flowers during ‘Holiday’. The girl turned out to be the daughter of the promoter. This was the one and only time Madonna invited someone on stage to dance with her during this tour (she kind of replicated the moment during her Rebel Heart Tour when she was searching for unapologetic bitches.)

The press wasn’t either very positive or very negative, but kind of in between. Dutch newspaper ‘De Telegraaf’ headlined their very negative review ‘pre-baked Madonna show disappoints crowd’ while the ‘Algemeen Dagblad‘ called the show powerful. Either way Madonna was all the Dutch press could talk about and she appeared in countless newspapers and magazines (just view our dedicated press page HERE).

Who could’ve known back then that they just witnessed a live show that would raise the bar and set the tone for all live shows to follow. Performing a live show transformed into performance art, where a story was through the musical library. To this day we are all still talking about how groundbreaking this tour was and is. Many have tried to follow in her path and recreate what she put out there back in 1990. Their cash can buy them a lot of things, but they will never be able to embody a show the way Madonna can. Money cannot buy stage presence.

How many shows did you see of the Blond Ambition Tour?

Amon: Just the one in Rotterdam and my parents even postponed our holiday because of it
Dave: Only 1 show since I was only 13 years old
Fred: All the Paris shows (3 /4 & 6th July 1990)

Fondest memory of the show

Amon: Her entrance! Emotional, there she was again…..
Dave: Hard to say, it was just one big spectacle. But if I have to choose then the moment she came on stage. The very first time I saw my idol live
Fred: I managed to get a front row seat on the first night at the cost of superhuman effort, because the battle was hard, unfortunately towards the end of the concert the pressure was so strong that I couldn’t hold my place… I thought I was going to faint… (fatigue probably due to the long hours of waiting under the sun, without eating and almost no drinking! most certainly a bit of stress!) However, seeing the opening of the show on this side was priceless!

Amon: Like a Virgin…..well I wonder why?
Dave: Hmmmm probably Like A Virgin! Couldn’t believe what I was seeing, but it made me proud. That was the Madonna I love
Fred: Seeing Like A Prayer live for the first time was an unforgettable moment! At the time it was already one of the biggest hits!

How does the tour rank among your favourite Madonna tours of all time?

Amon: Between 3-5
Dave: Also very difficult, because I was very young when I grew up I attended multiple shows, and many front row. I think it’s my favourite because it’s the first show ever, but experience wise it’s in my top 4
Fred: Number 3 (1st is MDNA and 2nd Girlie Show)

Amon: Own recording of the Rotterdam show on cassette (played it to death)
Dave: For years it would have been Nice. But since the release of Blond Ambition in New Jersey I have to admit that’s my fave registration. She was very funny and kick-ass. LOVE IT!!!
Fred: Passages of Truth or Dare that remind me that it was filmed in Paris!

Amon: the hat!
Dave: The tourbook, bought it at the show and couldn’t stop showing it to everybody
Fred: Crew Bomber jacket!