My Blond Ambition Tour in Rotterdam experience – by Dave Crombeen 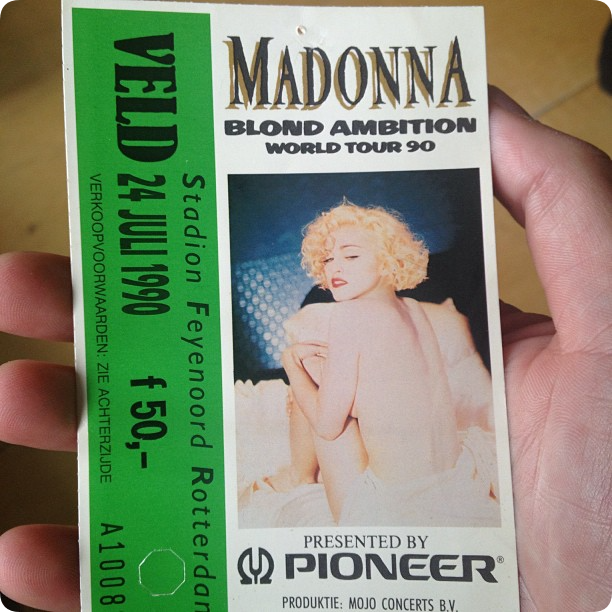 My first ever Madonna concert

“Dave in a few years you won’t hear anything about her anymore, you will outgrow her”.

Wow it’s been 25 years since I first saw Madonna live, I remember it like it was yesterday.

I was only 13 at the time, too young to go on my own. Thankfully my father managed to get field tickets and he was willing to come with me. I did want to arrive early as I needed a good spot and wasn’t that tall back then. Yeah I also queued back in the day :)

I remember arriving at the stadium around 9 in the morning, the weather was good but there was a crowd already. After visiting the merchandise booth around 100 times, I decided on buying something around 3pm.
My father was still in the queue so he could keep our spot safe. However when I returned to the merchandise booth, I was told that the gates were about to open. I decided to run back and shout it aloud to everyone that the gates were about to be openend. Everybody immediately stood up…..and then….nothing for two more hours. Oh well no one can really blame a 13-year old right?

When they did open I just ran for it. We found a spot in the front field, now we call it the infamous Golden Circle. Another few hours waiting and then it was finally time.

I have goosebumps while writing this. When she appeared on stage, I just stood there with my mouth open for at least thirty minutes and did not move at all. I was in some kind of trance. This was beyond amazing!! After those first 30 minutes, I danced and sung my heart out as if it were the very last time of my life.

A girl was pulled on stage by Madonna during Holiday. Oh my God I was soooo jealous!! When the show ended I just couldn’t stop talking about it, to be honest this was the case throughout the following months.

I was so deeply impressed.

My father too by the way. He attended quite a few shows back in the day, but this to him was the best live show he had ever seen. Such a combination of show and theater was unique. It had never been done before. Madonna really took the live show to a whole new level.