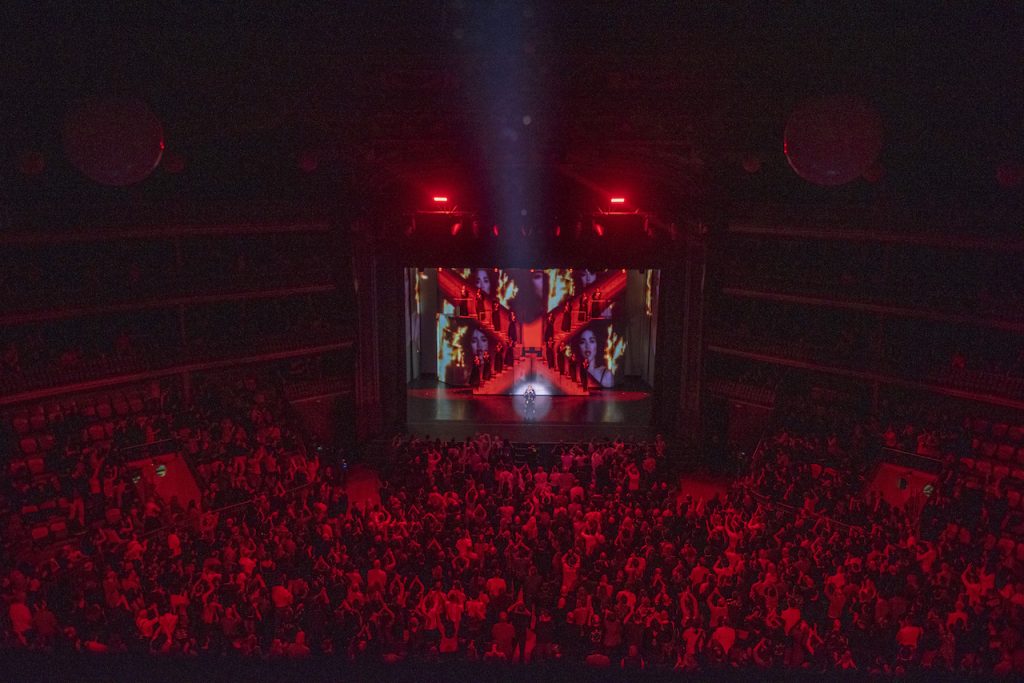 Madonna does not need to win anyone, this is no longer objective. Already conquered fans are long before this tour, before this new album, before even knowing that both things were on their way. Madonna is the monarch who inspired all who followed her with ambitions to inherit a place in pop royalty. That’s why you do what you want: live the way you want it, the albums as you like, the tours you want them to. More than 30 years after tours of arenas and stadiums and other large estates, I saw her in small rooms, such as the Coliseu dos Recreios in Lisbon (“my second home”, confesses, for the thrill of a very local) to be able to receive the who adore her with all the perks of those who know and can welcome. Of course the tickets are expensive. It’s Madonna, bitches, there’s no going back.

No phones allowed in the room, no photos, videos, recordings, nothing. Photographer? Only the officer. Who wants to see her is there, on stage, among the fans. In a woman’s natural habitat, which actually has more habitats than can be counted on with the fingers of both hands. Madonna was all, plus what she is now and hadn’t been. It is said and shown on stage warrior, secret agent, semi-fadista at least in spirit, feminist, activist, politician, owner and boss of things in general, singer, guitarist, dancer, conversationalist and quasi humorist, Mrs. Madonna 61 years old. An age that for an ordinary mortal would never be enough to put so much together in the same place, in the same experience and in one voice.

The Madame X tour concerts take place in smaller venues, but what you see on stage is not minimalist, not a reduction in the artist’s performance ambitions. Quite the contrary. In the latest album, Madonna has sex and religion, change, technology, politics and how it all goes and is affecting everyone’s life. How does this ball become a smaller show? It does not transform. Because it is not necessarily smaller. Madonna has no way for such downgrades. The space is smaller than usual, but with more latitudes than normal for the limits in question.

“I didn’t want screens separating us”
Before the concert started, there was the best there could be before a Madonna concert: more Madonna. With Gaspar Varela and Miroca Paris circling a few American classics, wrapped in fado and warm and other less traditional things, to warm up a room that was not sold out but was nearby. And it’s good to see how Madonna fans are such a big happy and in tune community, especially when there are no phones as a company before the party. It was watching them talking, cheering, shouting and singing, as people do with each other. Very pretty.

Still the cell phones, which were with their owners but in closed bags that were only opened again outside the Colosseum: as there were few watches on the wrist, hardly anyone saw the time. Here’s a vow that the concert started late, but that doesn’t matter either. It’s been two and a half hours, more thing less thing, and it’s this count that will stay in history.

The Circus Begins: James Baldwin’s words on the giant screen (and it was really big, the bastard). “This is your wake up call,” says Madonna. “God Control”, choreographed sound record in detail, is like watching a flesh-and-blood music video and it’s great. Party on stage, but the craziness of weapons and their dangers in the lyrics is no mistake, it is irony of the good. The audience at hand. It’s done, they no longer leave.

The night is almost like that, a mix of techno party and political and social messages. With the focus clearly pointed on the songs of the album Madame X, but with good hand in time to fit themes of other times. Not many, sure, but well crafted. “Human Nature” (huge song) shouts “express yourself, don’t repress yourself”, entitled to an included asparagus pin that will have left many thinking about limb flexibility after 60; “Vogue” as we always know it, remembering that it doesn’t matter if youre a boy or a girl; “Future”, Madonna’s version of the things that these days do the crossover R&B-hip-hop-trap-etc, accompanied by images that say “guys, if you’re not careful, this is all over and there’s no other world”. And the last one, “I Rise,” out of the center of the room, lost fans trying to figure out how they could touch the diva and others in ecstasy because they did it. Blessed be.

“I’m finally in a place where I don’t need to explain what fado is”
Portugal and Cape Verde appear in the middle of the night. Madonna, a born conversationalist, with a humorous timing, yes, tells the story of her landing in Paris, how she came because her son came to play for Benfica, but suddenly, “football, horseback riding in the Comporta, cod and Port wine ”did not reach him. Appears the only friend in town, tells her that this is not possible, leaves home, meets people, Celeste Rodrigues, Dino D’Santiago, put his ears on fado, in the warm, likes everything, likes everyone, starts working on a new album, shoots a kind of pop bimby what he listened to (which came to reggaeton) and now on stage thanks.

Sings a fado with Gaspar Varela (not a fado singer, but Madonna is singing the fado and that goes) and sings “Sodade” by Cesária Évora. Moment, by the way, was stolen by the same Dean who taught him how to sing the old Cize classic. The man D’Santiago and his amazing voice. If there is adjective to use, we agree. Too strong for Madonna to win. In the middle, the Batukadeiras, to play and sing “Batuka”. There is a lot of coolness right now from who knows how the industry works, like who says, “Look who I found out, I know, pay attention to me.” But Madonna genuinely likes what she achieved with this cross reference. Of course you do. It is notorious, impossible to deny.

True, Madame X, the record, sounds like the great confusion, twists and turns in which the landscape is not all that seductive, from time to time seemingly lacking structure, an element that often makes the difference between great songs and others. But on stage, there is a framing that appears. There is still a lot of confusion, but suddenly it is chaos that makes sense. As if music had been created to allow this happening in these days at the Recreational Coliseum to come into the world. Not surprisingly so. Madonna knows how this works: showbiz, entertainment, life on stage, pop. Because, let’s face it, much of it was she who (re) invented it. Now make use of your toy as you wish. And this desire to never fail to create deserves a bow.

“My ego needs to be satisfied”
And bows had many. Enough. Madonna looks for them. You need them to live. “My ego needs to be satisfied,” he says at one point. He explains that he only knows a bad word in Portuguese, but repeats it whenever he can, aloud: “dude ** o”. A treat. “Don’t talk when I talk,” he warns, then say “I love you too” when someone shouts “I love you,” which happened throughout the night.

It is the politics of proximity at work, such intimacy that the artist herself explains was one of her wishes with this digression. He declaims political slogans and salutes the Portuguese for not having “a psychopath in power”. Take the children on stage, sing and dance, tell everyone that there is a leg that is not well, she limps, that’s what it is, that no one is scared. Make toasts with the bottles that make up the scene, the beer is hot, but so what? Every night there’s a unique polaroid with a portrait of you to sell. Got a thousand euros this Wednesday. Not bad. Money on the table, vivinho da silva. And she sits next to a German boy in a brassiere, just because, because this is his “Late Night,” a live show with a seasoned host. Talk show host with future, someone give you a chance.

In the end, Madonna comes to “Crave”, dancing to a mirror ball, and it seems obvious: even though she is ill on one leg, she is happy, serene, fulfilled, but always incomplete, which gives her a lot of time to do new and return to the old man who is timeless. Shoots with “Like a Prayer” from the album that in 2019 turned 30 years old. She is dressed as a preacher and occupies the place well. It has the whole gospel in the obligatory choir and a crowd of believers ready to witness any miracle. Saint Madonna and her sinners. There would still be encore with “I Rise,” but the profession of faith was already done. And there are six more of these in Lisbon.