Madonna ‘set to release new Netflix documentary with behind-the-scenes footage of the singer, 62, and her Madame X tour’

Madonna is reportedly set to release a new Netflix documentary giving fans a behind-the-scenes look at her life.

The pop legend, 62, is said to have ‘signed a deal with the streaming giant’ and the ‘one-off special’ will also include footage from her recent Madame X tour.

Madonna toured throughout 2019 and 2020 as her Madame X alter ego, which is also the name of her last studio album, and banned fans from using their mobiles in order to keep shows ‘intimate’ and ‘interactive’. 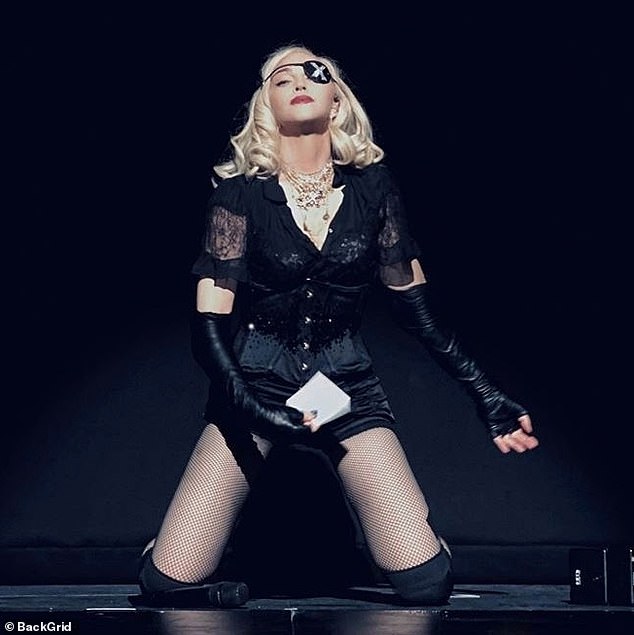 Documentary: Madonna is reportedly set to release a new Netflix documentary giving fans a behind-the-scenes look at her life (pictured during her Madame X tour)

The documentary will also reportedly look at Madonna’s battle with knee and hip injuries which forced the star to cancel some tour dates after she was ordered to rest by doctors.

A source told The Sun: ‘Madonna quite literally put blood, sweat and tears into the Madame X tour and she wants this documentary to show it off for the spectacle that it was.

‘She’s never been the type to fade into the background, so viewers will definitely get to witness her dry sense of humour.

‘She has spent weeks watching ­previews and helping to edit the footage at home in the US and is very hands- on with it.’

MailOnline has contacted both Madonna and Netflix representatives for comment.

It comes after a slew of stars have teamed up with Netflix to release documentaries such as Beyonce, ­Taylor Swift and Lady Gaga.

This isn’t Madonna’s first documentary and in 1991 she released Truth Or Dare which followed the star on her Blonde Ambition tour and showed behind-the-scenes with her then-boyfriend Warren Beatty, 83.

Madonna started touring in 2019 as her Madame X alter ego and banned fans from using their mobiles at the shows with devices put in lockable pouches, which only security could open.

Touring abruptly ended in March 2020 due to the coronavirus pandemic with the final two shows cancelled.

Only recently, Madonna has been teasing a ‘concert film’ of her Madame X tour and sharing behind-the-scenes videos of her latest project to Instagram.

The singer has also been showing off her ‘beautiful’ scar around her hip in Instagram snaps and calling herself a ‘survivor’.

In one short clip posted earlier this year, the singer posed with daughter Mercy James, 15, and revealed she had been editing until 3am.

Madonna captioned the video, which was overlapped with Dusty Springfield’s Spooky, with: ‘In the Cool of the evening………….. in the edit till 3 am. #edit #madame❌ #mercyjames #dustyspringfield #burberry.’

Earlier in the week, Madonna had posted another montage of clips which she captioned with: ‘Back in the Edit……….Madame ❌ coming soon! #jetlag #burberry.’

In the video, the star put on a typically daring display as she cheekily flashed her underwear in the behind-the-scenes clip, before quipping: ‘I’m just working!’

The clips kick off with a visual from the concert, set to the opening chords of the album’s lead single Medellin.

It goes on to show Madonna playfully flashing her underwear before falling asleep on the sofa with jet lag from her whirlwind trip to Africa with her four youngest children over the New Year.

Madonna adopted David Banda, 15, Mercy James, 15, and twins Stella and Estere, eight, who were all born in Malawi, Africa.

The singer also has daughter Lourdes, 24, with ex Carlos Leon and son Rocco, 20, with ex-husband and director Guy Ritchie.