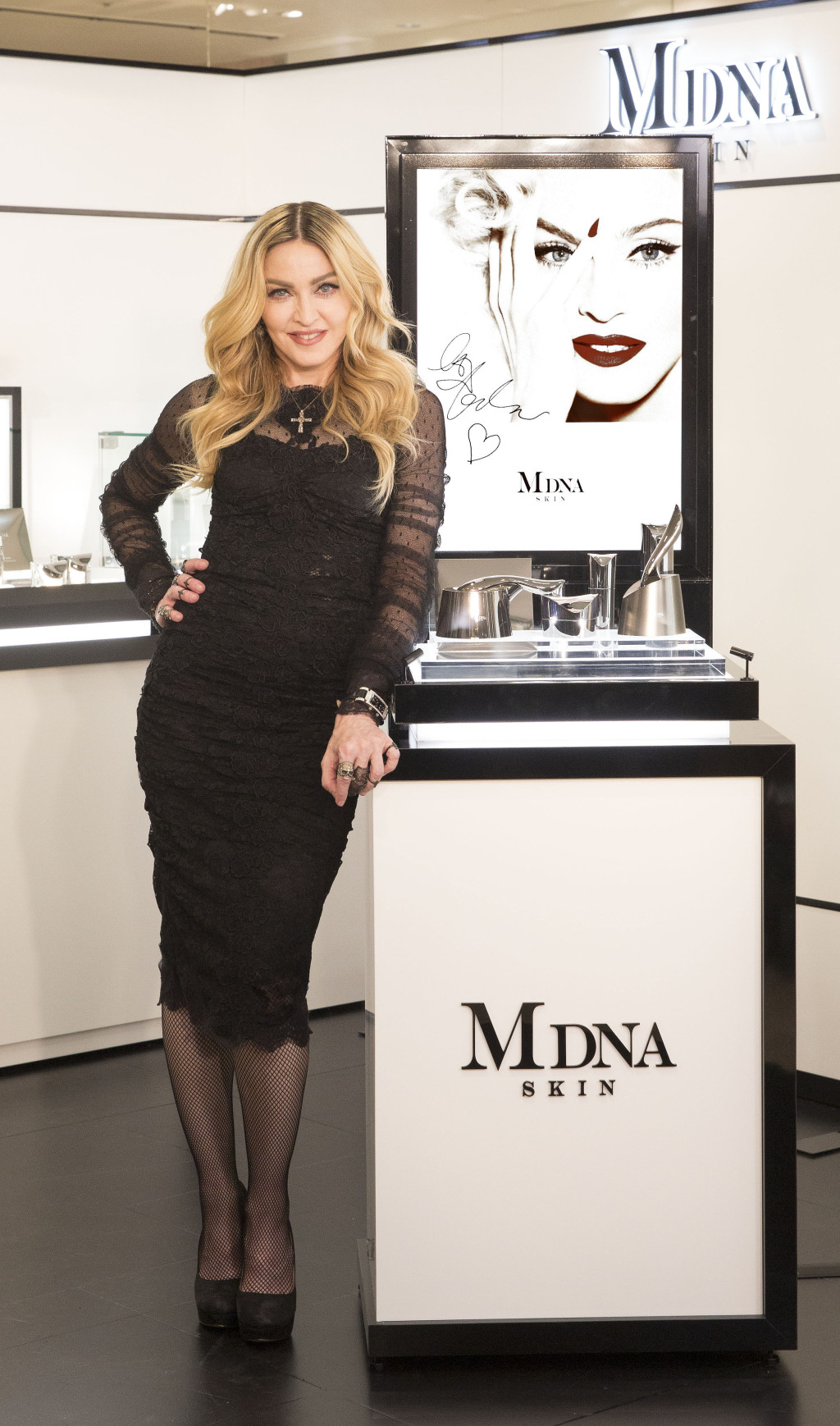 Madonna is currently touring Asia but she has more than just concerts on her itinerary. After playing two shows in Tokyo as a part of her Rebel Heart tour, the Material Girl put in an after-hours appearance at Tokyo’s Ginza Mitsukoshi store to promote her skin-care line, MDNA Skin.

The superstar arrived at the basement of the department store at 10:30 p.m. an hour behind schedule for a five-minute photo shoot with Isetan Mitsukoshi Holdings president Hiroshi Onishi and Tsuyoshi Matsushita, president of Japanese beauty company MTG, which makes the skin-care line.

Wearing a sheer black dress and a silver cross necklace, Madonna signed an advertisement board promoting her line but declined to give a speech or take questions from the dozens of reporters assembled. When asked by the photographers to smile bigger for their cameras, she replied softly, “I can’t,” before blowing a kiss and making a quick exit.

MDNA Skin was launched in 2014 in Japan and it is now being expanded and rolled out to select Asian markets. The line is produced by MTG and was developed with the singer herself and her aesthetician, Michelle Peck. The brand made its debut with a device called the “skin rejuvenator,” which is designed to be used with a clay mask, as well as a serum. Products being launched now include a face wash, a rose mist, an eye mask and another device conceived specifically for removing the clay mask. Prices range from 4,500 yen, about $37, for the face wash to 58,000 yen, or $481, for a set including the skin rejuvenator and clay mask.

MTG’s Matsushita said he plans to introduce MDNA Skin to the U.S. and European markets in the future, although no dates have been set.

The MDNA Skin line utilizes ingredients including thermal water, clay and olives from the Italian town of Montecatini Terme in Tuscany. MTG has plans to add even more products to the line in order to offer a total skin-care solution, but development and approval takes time when one is working with one of the world’s most famous perfectionists.

“All these products had to get by Madonna,” Peck said. “We’re not going to rush something just to make a launch. If it’s not ready, it’s not going to be here, because it’s not approved because there’s still things that need to be done to it to get in ready for the public. Which means it didn’t get by Madonna, it didn’t get by me and we’re still working on it. And that’s what I love about her. We would rather have it be ready than have it be presented in a way that’s not authentic.”