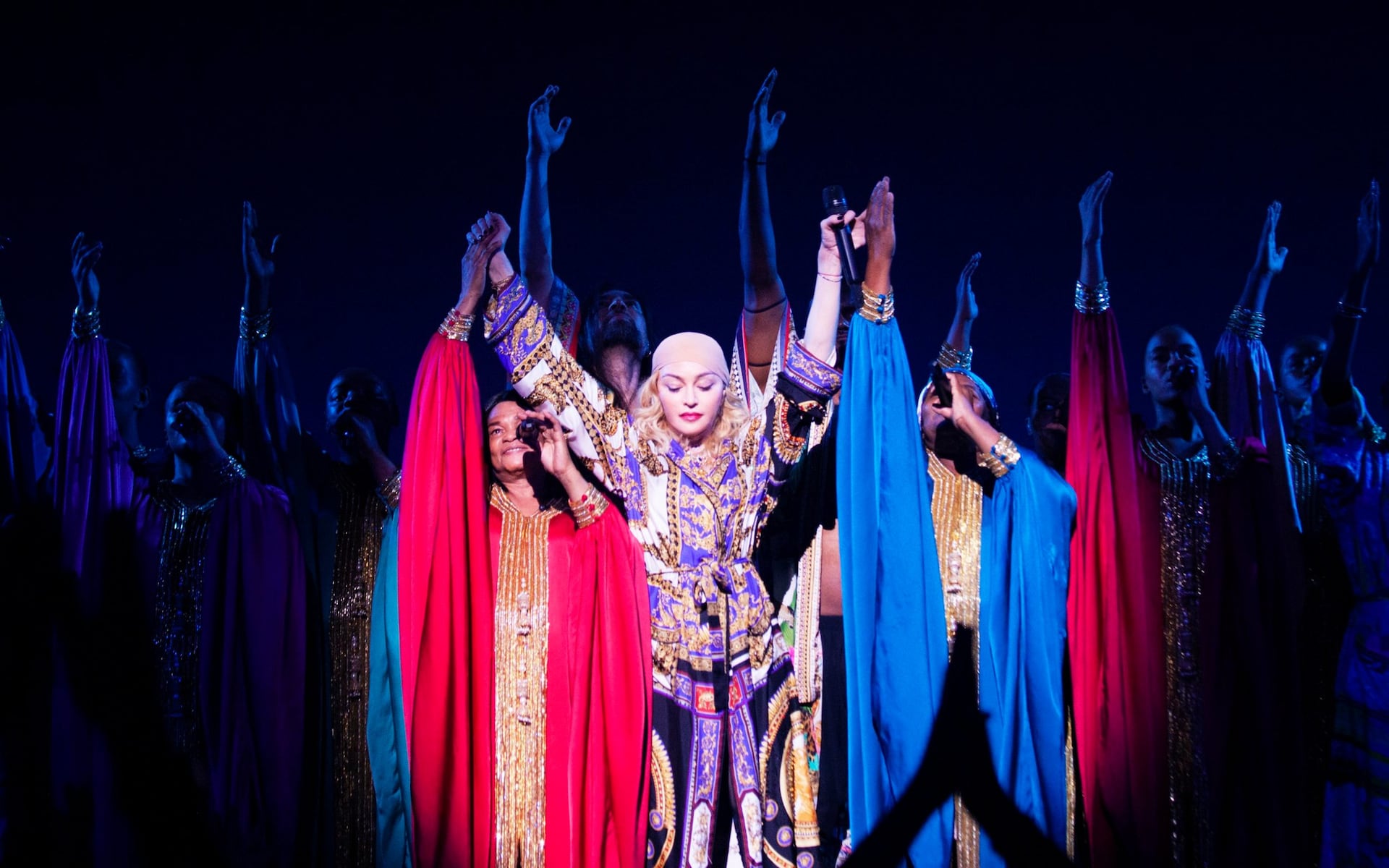 I‘m not sure who was having more fun at the opening of Madonna‘s London residency, the audience or the star. She sang, she danced, she joked and she beamed with almost childlike glee at the crowd’s adoring response. “How happy I am to have made it this far,” she declared, calling London “my second home.”

Madonna first played the city in 1983 to 1500 early adopters at the Camden Palace. Her next London gig was Wembley Stadium. She was clearly delighted to be back in a venue where she could not just reach out ad touch the audience, she could descend from the stage and sit in their laps. “Its so intimate. Its gorgeous and a thrill for me to be able to see all your faces.”

Nobody is going to mistake the salubrious 2,200-capacity Palladium for a cosy club. But the last time Madonna played London, in 2015, it was two dates at the O2 Arena for almost 30,000 people. That is about the same number she will play to across all 14 nights in London, if she makes it through her residency in one piece.

Madonna is 61, and reportedly having problems with her knees. She has already cancelled ten shows on this tour, including what would have been its London debut on Monday. But she was in fine form shimmying and shaking across the stage in a set full of artful and exuberant choreography.

Indeed, sometimes you might wish she would just sit down and sing, because, in the moments when she did just that, she showed she was in exceptionally good voice. An interlude performing a Portuguese fado folk song was scintillating, whilst a stark rendition of 1998 electro ballad Frozen, performed solo onstage to a video of eldest daughter Lourdes dancing, was a highlight of the night.

But Madonna likes to give bang for bucks and this was not a cheap night out. Face-value tickets were priced between £376 and £1,247. What fans were presumably paying for was a chance to get up close and personal, a sense of proximity to their idol that you rarely get in the stadiums and sports arenas where she has performed since the eighties.

When Bruce Springsteen started this trend of superstars in theatres with his acclaimed 2017-2018 Broadway residency, all he brought along was a guitar and piano. Madonna’s idea of intimacy is a little different, involving a a dozen dancers, another dozen musicians, a 14-piece choral ensemble from Cape Verde and 39 crew members making sure the elaborate sets, dazzling projections and incessant costume changes all ran smoothly. Rather than stripping back her stadium extravaganzas, Madonna has essentially tried to squeeze the stadium into a theatre.

It was like a cross between experimental theatre and showbiz extravaganza, Busby Berkeley meets Ballet Rambert

Yet crucially she infused the production with her own eccentric personality, chattering incessantly between songs in bizarre monologues that moved quirkily between ribald humour, political jokes and idealistic proclamations of artistic freedom.

During one odd interlude, she auctioned a Polaroid of herself to charity, admonishing her devoted audience for only coughing up £1,500. “Are you guys all confused by Brexit as it comes to an end?” she asked, before requesting we spare a thought for America where the nightmare continues. “We have a psychopath in the White House.”

It didn’t always make sense, but the show’s slightly anarchic nature only added to the sense of fun. It was like a cross between experimental theatre and showbiz extravaganza, Busby Berkeley meets Ballet Rambert fired up with monster pop tunes. Pop music is supposed to be weird, sexy, silly and exciting and this show was all of that and more.

Madonna has survived so long in this fickle business because she loves what she does, and tonight it showed in her smile. I’ve been watching her live for four decades, and this may not have been her slickest or most spectacular – but her wacky joy in performance made it the most entertaining Madonna show ever.

More at The Telegraph