Madonna: ‘I wanted to be somebody – because I felt like a nobody’ 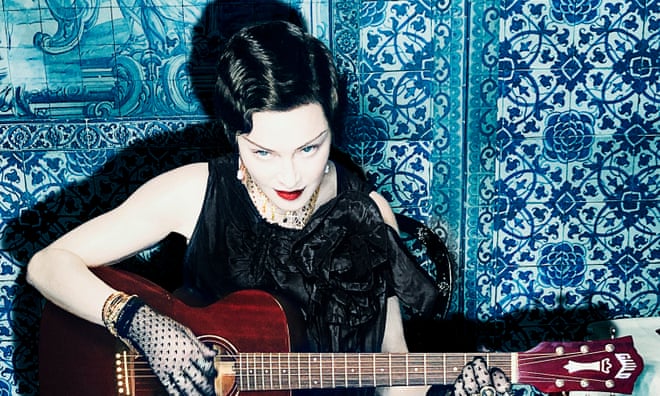 She wanted to rule the world – and did. Madonna looks back on four decades of fame, why the music industry needs a #MeToo moment, and her still insatiable ambition

On YouTube, you can find a clip of Madonna appearing on American Bandstand in January 1984. She is still promoting her eponymous debut album, released six months before, and still just one among a raft of young singers mining a vein of post-disco dance-pop. She has yet to have a Top 10 hit in the United States, and the host, Dick Clark, still finds it necessary to explain who she is when introducing her. Her label’s expectations for the single she performs, Holiday, are so modest, it hasn’t bothered commissioning a video for it.

And yet it’s not just hindsight that makes the viewer realise something big is about to happen to her career. After she mimes to Holiday, the audience won’t stop screaming and cheering: Clark has to plead for quiet so he can interview her. Answering his questions, Madonna is funny and flirtatious and very, very confident. He asks her what her ambitions are. “To rule the world,” she answers.

Thirty-five years on, Madonna laughs when I mention it. “Yes,” she nods. “Sorry for saying that.” The thing is, she says, she wasn’t confident at all back then: it was all a front. “I may have been insecure, I may have felt like a nobody, but I knew I had to do something. If I was going to make something out of my life, I had to, you know, hurl myself into the dark space, go down the road less travelled. Otherwise, why live?”

She recalls feeling as startled as anyone else when she realised how famous she had become, less than 18 months after she had informed Clark she was going to rule the world. The Like a Virgin album had come out and sold 3.5m copies in 14 weeks in the US alone. She had scored six transatlantic Top 10 hit singles in under a year. Desperately Seeking Susan was in cinemas: her presence as the titular heroine had turned a low-budget film packed with cameos from New York underground luminaries – Richard Hell, Arto Lindsay, Ann Magnuson – into a box-office smash. No one was talking about her being just one among a raft of young post-disco dance-pop singers any more.

“It took my breath away. I can’t begin to tell you. I remember the first concert I did on the Virgin tour, in Seattle, when everything became big and I had no way of being prepared for it. It literally sucked the life out of me, sucked the air out of my lungs when I walked on stage. I sort of had an out-of-body experience. Not a bad feeling, not an out-of-control feeling, but an otherworldly feeling that nothing could prepare you for. I mean,” she smiles, “eventually you get used to it.”

Her unexpected, apparently unresearched and ultimately divisive plunge into the world of Ding-a-Dong, Dana International and nul points pour le Royaume-Uni notwithstanding, she radiates starry self-assurance. And why wouldn’t she? A list of her achievements in the intervening 35 years includes becoming the bestselling female artist ever, the most successful solo artist in the history of the American charts, the highest-grossing solo touring artist ever and, as she dryly notes, “still being alive”, her only real competition for the title of most legendary pop artist of her era, Michael Jackson and Prince, having both prematurely passed away.

Sometimes when she talks, she unmistakably sounds like a pop star forged in a different era. She is “dizzy” at the sheer turnover of pop in the digital age – “There are so many distractions, so much noise, so many people coming and going so quickly, it takes away the artist’s ability to grow” – and says the modern way of writing pop songs, where artists are thrown together with a rotating cast of random star producers and writers at songwriting camps, didn’t suit her at all. “Oh, I tried that on MDNA and Rebel Heart. I worked with a lot of talented people, but it’s too hard to have a vision when you work with so many people: there’s so much input. I didn’t enjoy the process at all. Sometimes it was great, but it’s very weird to sit in a room with strangers and go: ‘OK, on your marks, set, write a song together!’ You have to reveal yourself, you have to be vulnerable, and it’s hard to do that right away.”

Full article at The Guardian