The living icon continues to highlight social injustice through music

Madonna, the Queen of Pop, has continued to top the Billboard charts for the past 35 years. She refuses to be hampered by critics and stereotypes, breaking from traditional expectations with creativity beyond measure. Selling more than 400 million records worldwide, she is celebrated as the best-selling female recording artist of all time by Guinness World Records. As one of the “25 Most Powerful Women of the Past Century” Time Magazine recognized her as the most influential figure in contemporary music, constantly reinventing both her music and image with disregard to critics. 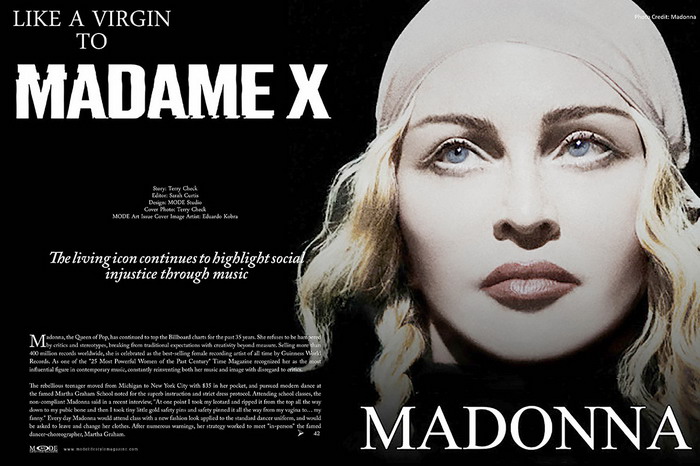 The rebellious teenager moved from Michigan to New York City with $35 in her pocket, and pursued modern dance at the famed Martha Graham School noted for the superb instruction and strict dress protocol. Attending school classes, the non-compliant Madonna said in a recent interview, “At one point I took my leotard and ripped it from the top all the way down to my pubic bone and then I took tiny little gold safety pins and safety pinned it all the way from my vagina to… my fanny.” Every day Madonna would attend class with a new fashion look applied to the standard dancer uniform, and would be asked to leave and change her clothes. After numerous warnings, her strategy worked to meet “in-person” the famed dancer-choreographer, Martha Graham.

Madonna recalled that Martha said, “I’m going to start calling you Madame X from now on,” and I said “Why?” and she said, “Because you’re like a secret agent. You’re like a spy. Every time I see you, you look different. I pass you in the hallway, I’m not sure it’s you. You keep changing the way you look, your identity.” And I said “Yeah, that sounds good, I like that. I’ll take that.”

After dance classes, she worked as a waitress at Dunkin Donuts, and as a backup singer, eventually writing songs and promoting herself as a solo act. From one radio station and night club to another, male managers requested sexual favors in exchange for playing her music. “No” was always the answer, and then, she met disc jockey, Mark Kamins, who introduced her to Seymour Stein of Sire Records. The single, “Everybody” was recorded as part of her debut album, Madonna in 1983. 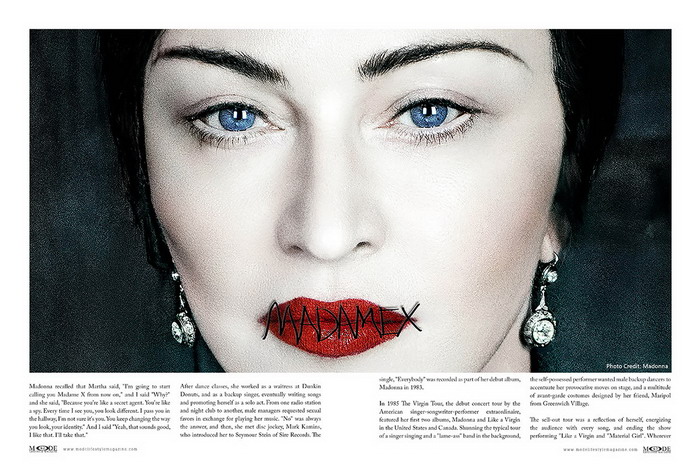 In 1985 The Virgin Tour, the debut concert tour by the American singer-songwriter-performer extraordinaire, featured her first two albums, Madonna and Like a Virgin in the United States and Canada. Shunning the typical tour of a singer singing and a “lame-ass” band in the background, the self-possessed performer wanted male backup dancers to accentuate her provocative moves on stage, and a multitude of avant-garde costumes designed by her friend, Maripol from Greenwich Village.

The sell-out tour was a reflection of herself, energizing the audience with every song, and ending the show performing “Like a Virgin and “Material Girl”. Wherever she performed, the fans, called Madonna Wannabes, would flock to retail stores like Macy’s to purchase Madonna-inspired clothing, crucifix earrings, and fingerless gloves. The tour was recorded and then released as Madonna Live: The Virgin Tour.

In one of Madonna’s most famous singles, “Like a Virgin” smiling she sang a few lyrics,

Touched for the very first time

She liked the innuendos of living or reliving one’s sexual ecstasies over and over again. 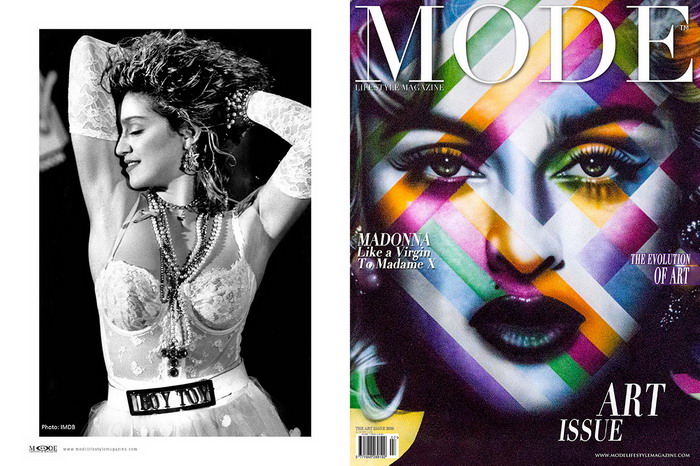 Time moves on and in the year 2000, Madonna with Mirwais Ahmadzai wrote and produced the 8th studio album, Music, a collaboration of dance-pop and electronica vibe together with folk, country, and rock. Dedicated to her husband, Guy Ritchie, “the coolest guy in the universe”, Madonna wrote, “I Deserve It”, a testimony to her life’s journey as Guy entered her life. Performed as an acoustic track with a hip-hop groove, the unpredictable music icon sang acapella the lyrics in part:

“This guy has danced for me

And I have danced for him

This guy has cried for me

And I have cried for him

Many miles, many roads I have traveled

Fallen down on the way

Many hearts, many years have unraveled

Leading up to today

I have no regrets

There’s nothing to forget

All the pain was worth it

Not running from the past

I tried to do what’s best

I know that I deserve it”

The subsequent tour, Drowned World Tour, featuring songs from the Ray of Light and Music albums, was a huge success that played to more than 700,000 fans in the United States and Europe. Receiving mostly positive reviews, Michael Hubbard from Music OMH commented that “you’d struggle to find a better show than Drowned World and you’d find it difficult to find a mainstream artist who can command near-universal respect for anything like as long as this fine lady. She displayed that temptress quality which has beguiled us for nearly two decades and that, combined with her exquisite music, is why Madonna is so special.” 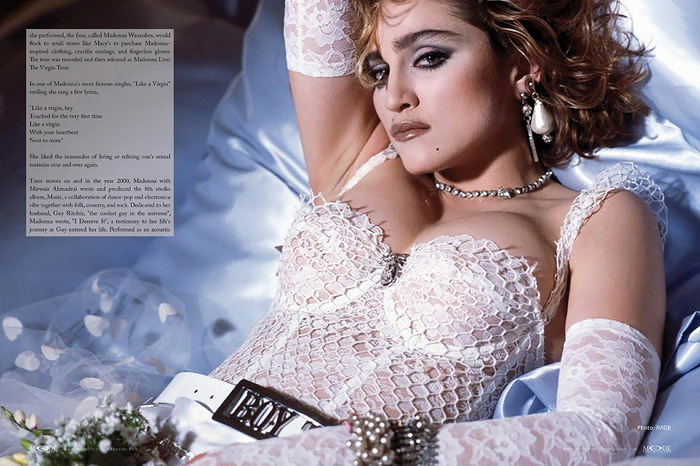 Life’s journey is ever-changing, and for Madonna moving to Lisbon for her son’s education brought her a new perspective to music. In a recent interview, she reminisced, “I started getting invited to people’s homes and they have things called living room sessions. So everyone would congregate. People would bring wine, they would bring food, sit around the table. And then suddenly musicians would get up and start playing instruments and singing fado music and morna music and samba music. I was like, ‘Wait. What’s going on here? Like artists just get up and perform and you don’t get paid and they’re just doing it for fun and love and passion?” Meeting, conversing and partying with artists, painters, and musicians, she felt connected to an unknown universe of creativity challenging her to record an album.

Fast forward to 2019 with the release of Madame X, the nickname given to her by her former dance instructor, Martha Graham, Madonna was forever experimenting with her vision of life, constantly pushing boundaries with her music and performances. In the promo video, Madonna declared that “Madame X is a dancer, a professor, a head of state, a housekeeper, an equestrian, a prisoner, a student, a mother, a child, a teacher, a nun, a singer, a saint, a whore in the house of love. I am Madame X.” Together with the French producer Mirwais, she tackled social issues in the album including gay rights, racism, freedom of speech, sexism and gun control. Like Bob Dylan, Madonna the songwriter/performer with a fan megaphone of tens of millions, has shined a spotlight on today’s social injustice. Madonna may be the next recipient of the Nobel Prize for Literature. 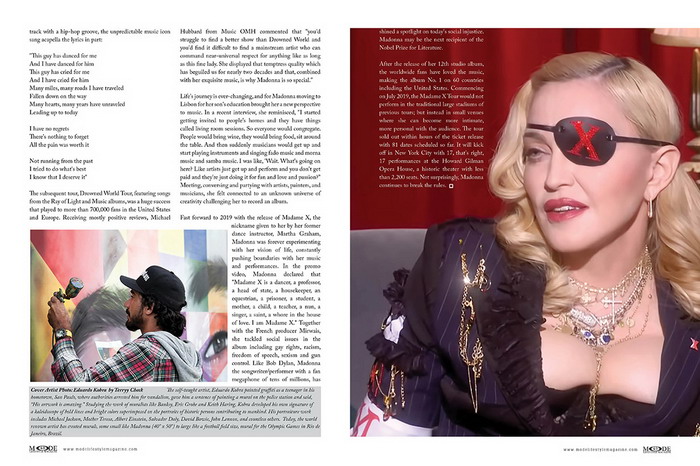 After the release of her 12th studio album, the worldwide fans have loved the music, making the album No. 1 on 60 countries including the United States. Commencing on July 2019, the Madame X Tour would not perform in the traditional large stadiums of previous tours; but instead in small venues where she can become more intimate, more personal with the audience. The tour sold out within hours of the ticket release with 81 dates scheduled so far. It will kick off in New York City with 17, that’s right, 17 performances at the Howard Gilman Opera House, a historic theater with less than 2,200 seats. Not surprisingly, Madonna continues to break the rules.

The self-taught artist, Eduardo Kobra painted graffiti as a teenager in his hometown, San Paulo, where authorities arrested him for vandalism, gave him a sentence of painting a mural on the police station and said, “His artwork is amazing.” Studying the work of muralists like Banksy, Eric Grohe and Keith Haring, Kobra developed his own signature of a kaleidoscope of bold lines and bright colors superimposed on the portraits of historic persons contributing to mankind. His portraiture work includes Michael Jackson, Mother Teresa, Albert Einstein, Salvador Daly, David Bowie, John Lennon, and countless others. Today, the world renown artist has created murals, some small like Madonna (40” x 50”) to large like a football field size, mural for the Olympic Games in Rio de Janeiro, Brazil.