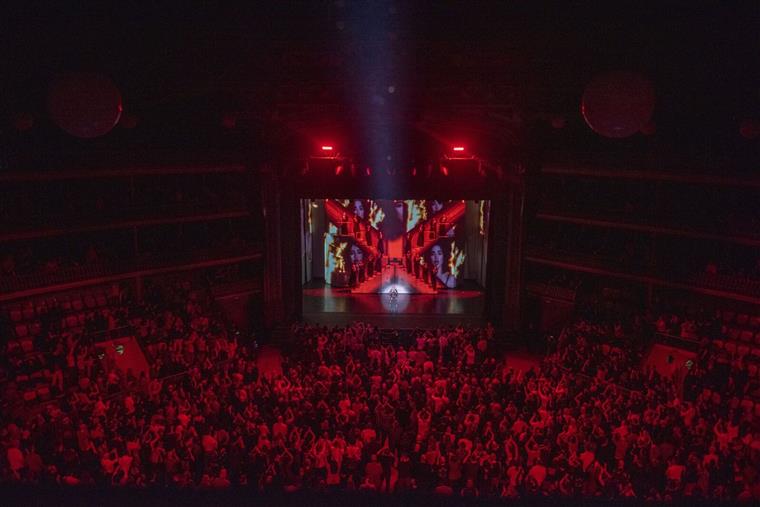 In the second concert at the Coliseu dos Recreios, Madonna again raised the room for Portugal, for its music and its causes.

Even before appearing on stage, in a voice-over, Madonna explained to the audience why she decided there would be no cell phones in the room – at the entrance, they are tucked into small tamper-proof bags and only unlocked at the exit. “I want you to be here and enjoy this trip with us. Don’t let anything get in the way,” she said, anticipating her first appearance behind the projection of a huge, burnt and faded US flag. Later and twice there will be to speak out against the leadership of his country: she calls Donald Trump “a man with a small penis” and then a “” psychocopath “who has no shame in” inventing a war “to deal with an impeachment process. ” ongoing. “God bless America,”

“Madame X”, revealed on last year’s album of the same name, rose on Tuesday for the second time on the stage of the Coliseu dos Recreios to offer a show where the pop queen reciprocated the “inspiration” that Lisbon gave her. In about two and a half hours, with the songs of the new album, brought to the stage the fado, warm funaná and their timeless songs.

The concert was music, but also political and manifesto about world news. It raised its arm against war, the proliferation of weapons in the US, discrimination and climate emergency. During “God control”, she stressed that we were “all in the same boat. If the ship sinks, we all sink. But we will not let that happen,” she says of the urgency of “a new democracy.”

The political ambition is large and global in scope, but Madonna wants a show of intimacy, in communion with the public. She demanded that everyone surrender, but returned everything unreservedly, despite the injuries and pains she revealed to have in her legs (which led to the cancellation of some US tour concerts). Madonna, 61, sang, played, danced and interacted abundantly with the room.

On her return to her “second home”, as she called Lisbon and where she starts the European tour that also passes through London and Paris, she again explained the move to the Portuguese capital. The story is known. Her son’s passion for football and training at Benfica drove her out of her “comfort zone” and discovering new sounds and great women she is said to have fallen in love with. Talks of the singer Celeste Rodrigues, whose great-grandson Gaspar Varela invited to accompany her in this show with the Portuguese guitar; by Cesária Évora, from whom she sings Sodade “with Dino d’Santiago; and from the Batukaderas of Cape Verde, who catapulted to fame and with whom she swings on stage.” Be proud of you because you created all these fantastic women. ”

There was a sense of belonging when the stage turned into Madonna’s Fado House, where the American ventured to sing in Portuguese: “I asked a fadista / What is your devotion / I pointed a guitar / And it beat my heart”. Several times he wanted a Amarguinha or a White Port – but only drank beer on stage – and to the end reserved some of the most cherished themes by the public.

“Like a prayer” was perhaps the song with which the room was most buzzing, although the audience barely sat down during the concert, which ended with the singer announcing the word “Home”. Madonna has also returned to an encore, with “I rise.” The screen displays images of burning forests, Parkland’s attack, war victims and amputees. Her eternal struggle, Madonna says, is for Freedom. it turns into a huge LGBTQ + flag and Madonna left the room across the main hallway of the Colosseum, fist raised, singing, “Power to the people.”