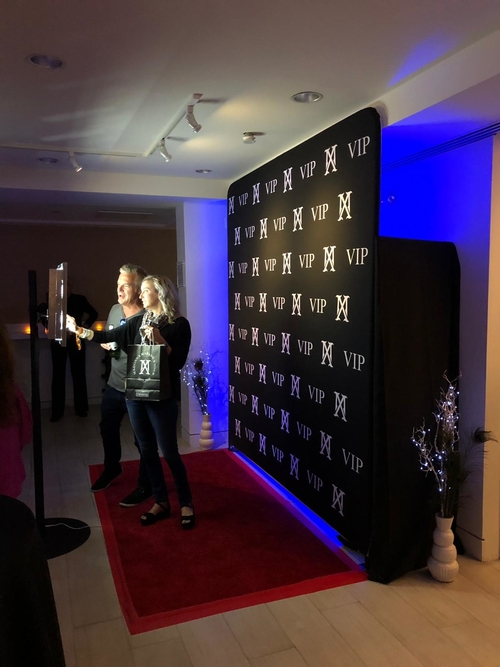 During the pre-show party we were picked up by Justin and Bryan for the backstage tour. We were led into the back of the venue where we were given a lecture about the process of the show. Justin is the head of security and told us Madonna is one of the hardest working people in showbiz. She does about 100 entire shows before opening night! She is involved in every single detail of the show and it has to be perfect. From zipper to lightning.

After the interesting lecture, we were brought backstage, we were told we needed to stay in between the white lines on the floors, because the backstage was extremely packed. Usually there is a lot less stuff brought in at small venues like BAM. I believe everything goes into 9 trucks and it takes them aprox 9 hours to unload. I think it must be like playing ‘Tetris’ for Madonna’s staff.

We were shown the hallway to the dressingrooms, but we were not allowed to see them. We did see the smaller dressing area of Madonna and the one for the dancers. A setlist was hanging on a wall, so we got to see what songs she was going to do. I saw two of my faves (not gonna spoil) so I was really happy. We came to the musicians area, where all the instruments stood.

Everybody was quiet backstage. Justin told us it was because everybody was up since early that morning and they were very focussed. He also told us that all music was performed live, either onstage or offstage. Nothing was prerecorded. Then we headed onto the stage. There were these boring looking stairs. But don’t worry, during the show they use ‘geomapping’, to make things quite colourful. Nothing boring about this show! We took a group photo on the stage and after that we were escorted back to the pre-party area and we were free to get to our seats.