I know I’m late….well not that late, believe me I won’t be giving birth again anytime soon.

But here I finally present to you the report of last night’s Madame X Releaseparty in Concerto Amsterdam. We have been part of the organisation of the approved releaseparties ever since Confessions on a Dance Floor in 2005 and they have become quite the tradition.

This was the first time Concerto was hosting the party, FAME (where all the previous releaseparties were hosted) decided not to host one this time. Concerto is a legendary store in the heart of Amsterdam and has been serving our collector’s dreams for quite a while.

Yesterday we (moi, Dave and Amon) made sure to arrive on time in order to set things up, put up some posters, have some drinks, do a little dance, make a little love so we could get down that night. Madame X’s face was gazing at us from every corner of the Concerto Cafe. Some fans turned up quite early and others already grabbed a goodie-bag, but were quickly told to wait. 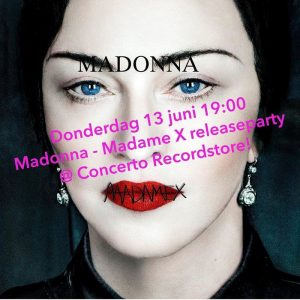 The sale of the incredible Madame X album went live at 19.00 while our own DJ Amon pushed play, or actually put the needle on it. With Madonna on the wall through a beamer and dancing the cha-cha-cha to Medellin the party was officially a go. There was a huge turn-up so unfortunately in the end there wasn’t enough goodies to put in all the bags and also we had to cut down on the free posters (not two but one per person). But in the end everyone went home with their items and free goodies.

It was a great opportunity for a lot of people to catch up, discuss the upcoming Madame X Tour and dance to the fantastic new tracks. A little before 20.00 yours truly had to depart as she had a date with Mariah Carey in the Ziggo Dome. While she’s absolutely fabulous I couldn’t stop thinking about the mindblowing new album, sorry Mimi.

I truly hope everyone had a great time at the one and only Dutch Madame X releaseparty and I thank you all for coming!

Onto the next one!

Check out the photo gallery HERE