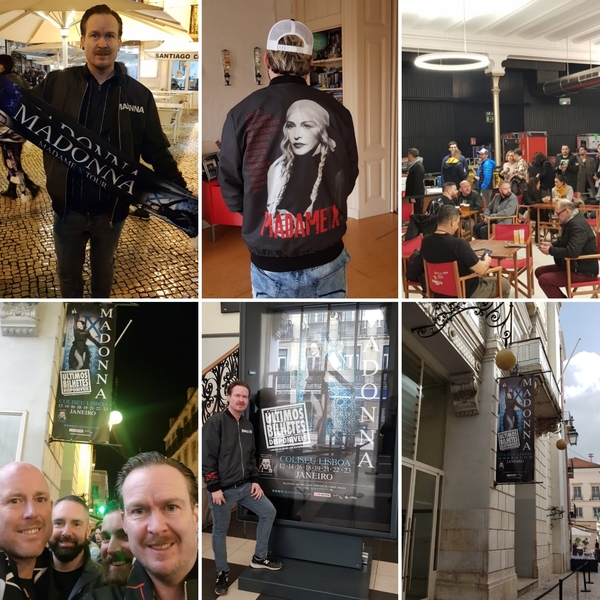 The waiti is over!!
I will live 5 years shorter because of all the stress this tour gave me, but I finally witnessed the Madame X Tour (MXT) myself. It was worth waiting for, this experience is epic!

My husband and me arrived 1 day prior to the show. After dropping our stuff, we met up with Madonnaunderground member Fred and his man. Nice to have some drinks and talk about Madonna.

The next day, was the big day. First picked up 2 friends from Scotland, 1 of them is also a huge M fan. After a welcome drink we went to the Coliseu Dos Recreios to check out the theater and to take some photos. The rest of the day was spent sightseeing.

After a power nap it was time to get ready to go to the show. Due the heavy rain, we had a leakage in the apartment, and had to switch to another. Believe me, this is not something you want 3 hours before going to the venue. My stress level was sky high (also still afraid that M would cancel the show, nothing is sure with this tour).

We took a quick shower in the new apartment and went to the theater. We arrived just before 8pm. There was already a huge queue. A tour member was checking our seat send gave us the infamous collector’s MXT card with our seats written on it.

Sharp on time the doors opened at 08:30. Scanning tickets, locking your phone and security check went super fast. In the venue were had to take the stairs and at the end there was a merchandise stand. It took a very long time to buy some stuff because it was super busy. There’s another stand near the toilets, better go there!

Time for a drink at the bar, which was also the area where you could use your phone again. There were a lot of familiar faces at the bar. Great to see my Madonna family from around the world again.

Around 09:30pm we went to our seats. The theater is beautiful! Very weird and unbelievable to have a Madonna show in here.

At a certain point some bands members started to play some songs. Don’t know what time because my phone was locked again. After the set we got an audio announcement starting with “ladies and gentlemen, thank you for coming to the show. Due to technical issues…..
I almost got a heart attack, afraid of another cancellation! It appeared that it had rained inside the theater, but it was fixed. Because of that the showtime was delayed.

Around 11pm the lights went out and the show started. Wow, it was an emotional 2.5 hour roller coaster. Almost like a stadium show inside a theater but very intimate. The Madame X album fits very well in these kind of venues. Madonna was obviously injured. Something she mentioned also a few times during the show. But she gave us everything she had. She was in a very good mood and looked extremely happy to perform in Lisbon. She was very human and talked a lot. Because she’s dancing less than we’re a used to, her voice was stronger and better than ever!!

I won’t post any spoilers, that would be kind of impossible. There were so many highlights that I couldn’t choose anyway. This tour is special in many ways. Can’t wait to see Saturday’s show!