Express yourself: why Madonna wants to tell her own life story

You are here:
“It’s essential to share the rollercoaster ride of my life with my voice and my vision,” Madonna said when it was announced by Universal Pictures that she will be co-writing and directing a biopic about her life. The star was annoyed back in 2017 when she heard that Blonde Ambition, a screenplay about her early years in New York, was in development. “Nobody knows what I know and what I have seen,” she posted on Instagram. “Only I can tell my story.”

Now just turned 62, she is feeling reflective and ready to tell it, with a promising team of women behind her. Producer Amy Pascal for instance, whose credits include Oscar-nominated The Post and Little Women, and Donna Langley, chairperson of Universal Pictures and a key mentor for women in the film industry, who says that the biopic will present “the unvarnished story” of Madonna’s struggle as an artist trying to survive in a man’s world.

Madonna also has a gifted co-writer in Diablo Cody (Juno, Young Adult). All the ingredients are there for a strong, female-driven feminist film about Madonna’s place at the centre of the 1980s pop industry, but recent posts on Twitter suggest she is having problems knuckling down.

Since August, she has posted regular updates of scriptwriting sessions with Cody – or rather Madonna lolls around on a gigantic white sofa cracking jokes while Cody sits with her laptop looking partly bemused, partly exasperated. Every so often Madonna asks key questions – “do we want to freak people out or be more accessible?”, “will the studios love it?” And perhaps the most pressing issue of all, “it’s going to be very challenging to cast this”.

Madonna’s nervousness is understandable – making a biopic about one’s life is a risky business. How much of her “unvarnished truth” is palatable, and how far is she prepared to go?

Biopics are an excellent way to sell an artist’s back catalogue, but if they are to be anything more than a sanitised jukebox musical, they need to capture the musician’s struggle and the essence of the scene that created them. Elton John was involved with Rocket Man, the 2019 biopic about his early years, and fought hard for the drugs references and gay male sex scenes to be included, saying:“I haven’t led a PG-13 life.”

The movie was well-received, but John kept his distance during filming (“I felt it would be uncomfortable for everyone to have the person the film was about lurking around,” he said). Tina Turner, likewise, rarely came to the set of What’s Love Got To Do With It, the 1993 biopic about her life starring Angela Bassett and Laurence Fishburne, but afterwards felt ambivalent, saying she had been portrayed as a victim.

Madonna, by contrast, is doing the opposite. It has always been important for her to control her career and her mediation, and there is an autobiographical thread throughout her songwriting, so it’s not surprising that she wants to direct her own biopic. She also has directing experience, albeit with the mixed results of 2008’s Filth and Wisdom, and the 2011 historical drama WE. The challenge for her will be in letting go. Film-maker Carney James Turner recalls shooting an interview with her in 2014 for MTV Europe, saying she wanted to control everything – “the framing, her makeup, her facial expressions, the lighting. She’s a very strong lady with meticulous attention to detail. I’ve never encountered that before, not even with the Queen, who I shot at Buckingham Palace for a Duke of Edinburgh charity. The Queen was laidback compared to Madonna. It will be great if Madonna can trust the editorial process and the people around her, and let things run free.”

Another challenge for Madonna will be in choosing the stories she wants to tell, and how much of the chaotic energy and vulnerability of her early life she needs to portray. Then, as a director, how much freedom she will give the actress playing her. Fans will want to see the struggles and disappointments, and how Madonna found the strength to overcome those lousy moments. 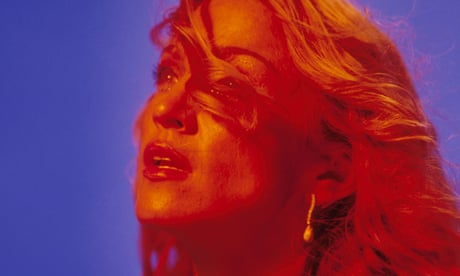 Madonna sees herself as a survivor, as an artist who is here to “disturb the peace”. Some of her strongest work rides that faultline of artistic tension and commerce, particularly in her live shows, where past hits are reimagined with imaginative critique. One of her most powerful pieces was the X-STaTIC PRO=CeSS installation she created with photographer Steven Klein at the Deitch Projects in New York in 2003. It features film of an inspired moment of deconstruction. A pristine white wedding dress, like the one in her Like a Virgin video, sits on a tailor’s dummy. The dress is set alight and gradually devoured by flames, until there is nothing left but charred, blackened fragments of lace. Copyright on the entire exhibit was credited to Boy Toy Inc, a tongue-in-cheek reference to the 80s persona that she cheerfully destroyed.

I’m not suggesting that Madonna’s biopic will be as confrontational, but if she allows herself, she could create something surprising. That is, if she lets the elemental truth of that “untold story” resonate and fully emerge. That will require some nerve.

Lucy O’Brien is the author of Madonna: Like An Icon

More at The Guardian