Exclusive: Madonna On Why She Chose Sofia Richie to Be the Face of Material Girl 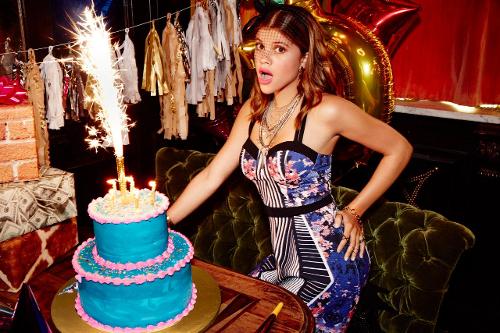 Sofia Richie is the new face of Material Girl, handpicked by Madonna in honor of the brand’s 5th anniversary. Above is an exclusive first look at Richie’s campaign.

“Of course I look up to Madonna,” gushes 16-year-old Sofia Richie. “I mean, she’s Madonna. She’s like the god of music.” While Richie’s words might fall from the mouth of any typical teenage fan-girl, she’s anything but. Daughter of Lionel Richie and sister to Nicole, Richie and I are chatting in a dimly-lit corner of New York’s Jane Hotel. Two women hover over her, gently and efficiently applying powder to her nose and adjusting the artfully arranged bobby pins in her hair; she’s in town for only a few hours to shoot the five year anniversary campaign of Material Girl, a juniors line designed and inspired by Madonna and her daughter Lola (aka, Lourdes Leon). As the new face of the brand, Richie has the rarefied pleasure of working with her idol.

“I have a few friends in common with Madonna’s daughter, and we’ve been wanting to meet for a few years,” Richie says. “And then one day, I just heard, like, hey Madonna and her daughter want you to shoot for their line and I was like wow, that’s so crazy. There are so many people that Madonna and Lola could have picked to be the new face, and it’s really cool to be a part of.”

Of her choice, Madonna says, “Sofia Richie perfectly embodies the style and spirit of Material Girl and is the ideal new face for the line.” Eighteen-year-old Lola added, “Coming from an artistic family, self-expression is in our blood.  I love Sofia’s style and energy, and look forward to collaborating with her.“

Richie goofs around on set, showing off her favorite piece from the collection in this behind-the-scenes snap.

For the anniversary campaign, the brand staged a cheeky fifth birthday party for Richie: There were cupcakes, a blue cake baked by Carlos Baker, sparklers, candles and balloons. Though she certainly looked at home in her role, Richie tells me she’s never been one for childish antics. “Ever since I was little I traveled with my dad,” she says. “I kind of grew up around adults. I never really went to school—I went for like three years of my life, but the rest was all homeschool—so I’ve always kind of had a mature head on my shoulder.”

While most teens her age are worrying who will ask them to prom, Richie is already plotting her next career move. “I love what I’m doing now,” says Richie, whose favorite piece in the line is a flannel shirt with shoulder cutouts. “I love modeling and being involved in the fashion industry. I for sure want to have my own clothing line.” Also on her list: Her very own apartment. “I plan on moving out soon, which is a big thing for me,” says Richie. “It’s already a conversation with my parents. I need my own space.”

In true Richie fashion, Sofia’s aspirations do not end there: She hopes to one day follow in her father—and Madonna’s—footsteps. “I want to do music too,” she says. “Music is more of something I want to do five years from now. Fashion is kind of between those five years.”

Though her famous family no doubt helped inspire her career path, it turns out the Richie name comes with its own set of complications. “As I get deeper into the industry, I notice that it always comes back to my dad and my sister,” she says. “And sometimes I’m like, well, what about just me? The Richie name sometimes doesn’t let you be just you, it pulls you back to your family and your past.” Which isn’t necessarily a bad thing, according to Richie. “I never felt overshadowed by my dad and my sister because they’vealways been such big people in the industry,” she says. “If anything I just feel they kind of push me in a good direction and spur me on.”

While she’s had the chance to learn firsthand what it means to turn your creative passion into a career, she’s also experienced the intense pressure that comes with showbiz. “There are such high expectations in the industry,” she says. “At first it really got to me, when people pick on you and they say things that really shouldn’t be said about anyone. But then you have to learn that there are people like that out there in the world and you just have to laugh it off and continue with your life. You know, just do you and not care what other people would think.” Sounds like something Madonna would say.