Confessions on a Dance Floor releaseparty FAME Amsterdam 15 years ago today! Check out the photo gallery

Fifteen years ago today we got to experience Madonna’s Confessions on a Dance Floor for the very first time in a worldwide premiere at FAME Music in Amsterdam.

In collaboration with Warner Music we celebrated the very first ever Dutch Madonna releaseparty at this location and it was a huge success! A lot of fans showed up and for many it was their ‘very first time’ to listen to Madonna’s brand new album. People had to queue outside at the side entrance to the store (right near the DAM) and once inside they got to purchase the album first before hitting the store’s disco dance floor.

One lucky winner who dressed up the best to disco dresscode was rewarded with the mega rare official promotional Confessions on a Dance Floor disco ball in box (an item everyone wanted to win.)

There was a ton of beverages to consume and at the end of the night the megastore felt like a bar, beer cans everywhere! FAME had done their very best to transform the store into a disco and there were Confessions on a Dance Floor posters everywhere.

It was a dream I had cherished ever since attending Mariah’s ‘The Emancipation of Mimi’ releaseparty at the very same store. I remember sitting there thinking what an awesome job DMCA (Dutch Mariah Carey fanclub), record company and FAME did and how amazing it would be to organise one for Madonna.

Needless to say it has become a tradition with every new Madonna release. FAME has moved to two different locations since and the turn out hasn’t always matched the one of the debut party, but it has always been a pleasure to help. For Madonna’s last album Madame X the releaseparty was moved to Concerto in Amsterdam.

Check out the pictures of the releaseparty and see if you can spot yourself! 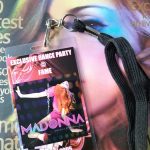