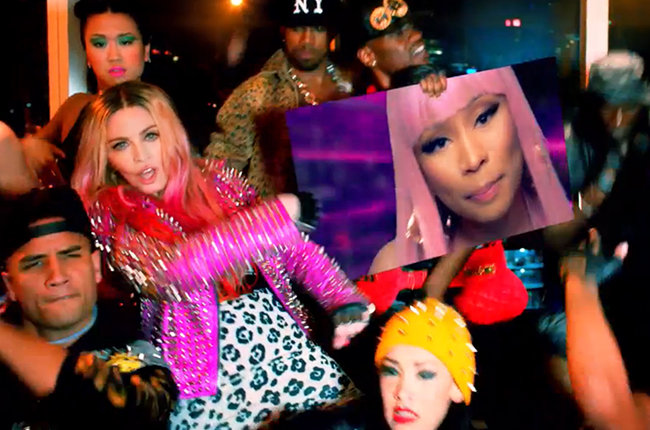 Madonna’s new music video for “Bitch I’m Madonna” is almost brazen in its quest to divert your attention. The clip for the Nicki Minaj-assisted single, which premiered on Tidal on Wednesday (June 17) and was unlocked for the rest of the world one day later, promised appearances from Beyonce, Miley Cyrus, Katy Perry and Rita Ora prior to its release, then tossed in Kanye West, Chris Rock and song co-producer Diplo for good measure.

It’s a fun game of spot-the-cameo — wait, was that Alexander Wang?! — where Madonna brings out the big guns and lets artists like Kanye and Katy sing along to the crunchy electro-pop track from remote locations. “Bitch I’m On Skype,” basically, but with the candy-colored post-ADD concept, Madonna is daring audiences not to be entertained.

Everyone is talking about this music video, because when you round up Kanye, Bey, Nicki and Madonna in one video and the phrase “streaming platform” isn’t involved, people are going to want to watch.