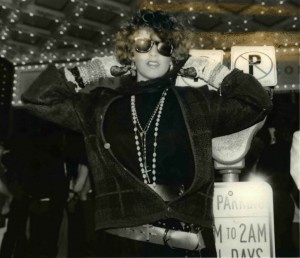 We’d especially love to talk to Danette Dollar, Bart Allen, Kimberly Meade, Michele Uanno, Liz Ephren, Linda George and April Simmons. The Oregonian’s coverage of the concerts included photos of those seven MTV generation teens dressed in “Catholic a go-go,” like their “favorite video performer,” as the newspaper described it.

Look at the photos above. Do you recognize yourself from 1985? Are you out there? I’d love to talk to you?

Are you still Madonna fans? Do you call her Madge or the Material Girl? What do you remember about the shows? Do you still have the outfits you wore? What was she like before the Kabbalah year, the foray into children’s books and fake British accent?

I have so many questions.

Strike the pose and give me a call at the number at the bottom of this post.

Of course, based on the breathless-yet-stuffy coverage by The Oregonian, you would have thought the pope was coming to town.

From stories about teens upset about how tickets were sold to the concerts’ aftermath, the newspaper dedicated 13 stories with photos to the event in less than a month.

Of course, much of the coverage was awash in skepticism, with reporters trying to figure out why children of the 1980s were so obsessed with the Material Girl.

“Hordes of Portland-area fans of rock singer Madonna, the latest overnight superstar in that volatile calling, are miffed in the extreme,” wrote reporter John Painter Jr.“They came to that state when tickets to the steamy, overtly sexual singer’s two Portland concerts set for April 15-16 in the Arlene Schnitzer Concert Hall were quietly  put on sale last Friday and quickly sold out.”