Up For Grabs Play London 2002 – Live Report by Kimberly 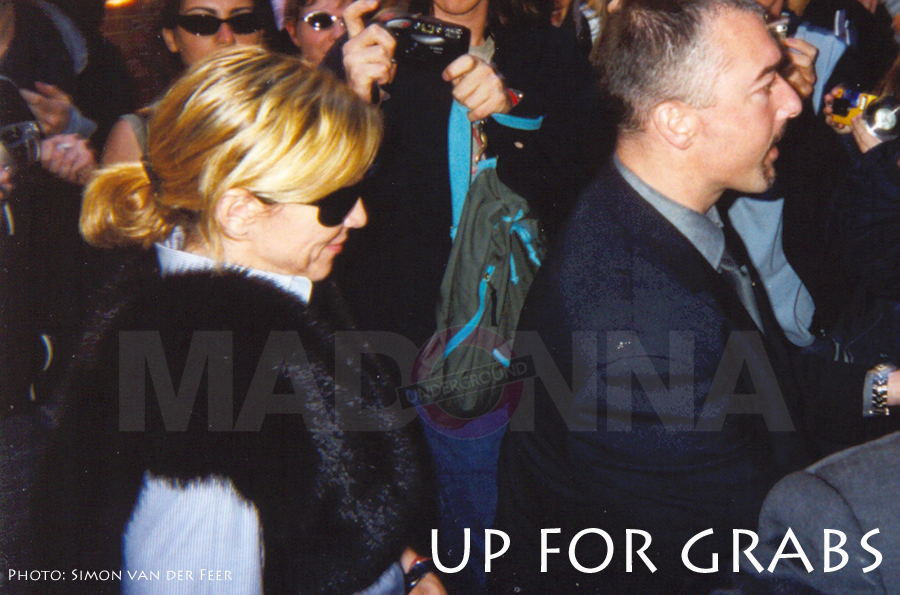 Madonna starred in a play on London’s West End, portraying the leading part as Loren titled ‘Up For Grabs’. I was really looking forward to it as this was an entirely different experience seeing Madonna in person. I only scored tickets for two dates, we were going to stay in London from July 7th until July 13th. I bought tickets for the July 11th play with seats in a box and July 8th for the stalls on the second row! My very first date would be a very very good one!

With loads of bags we went to London by coach. Unfortunately the toilet in the coach was out of order and the ferry was just shaking too much. After ten hours of travel we finally made it to London. I had never been here before, but felt at home instantly. When we found our hotel in South Kensington we first decided to have some dinner (at 11 in the evening!) Then we went to sleep to anticipate all that would bring us tomorrow.

The day had arrived of my first Up For Grabs date! Around dinner time we made our way to the Wyndhams Theatre at Leicester Square to see Madonna arrive. To my surprise there were some Dutch people that I already knew, and met some new ones. I was just hanging out at the front entrance of the theater next to the door, when suddenly security started putting up barriers. One security guy was pushing one barrier into my stomach, so I told him not to as it was hurting me. He just said to me ‘you need to move back’, so I said ‘I can’t move back, if they don’t move back’ pointing to the pushy people behind me. That was the beginning of a great relationship with this man (NOT!) 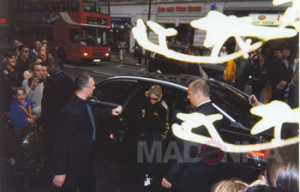 Suddenly I heard someone saying ‘her car has been seen!’ Immediately I started feeling sick and my stomach felt like it was having a ride in a rollercoaster. To my surprise this big black car parked up the sidewalk, would that be Madonna’s car? Yes it was indeed. Madonna got out of the car wearing a blue tracksuit with her hair pinned up. I was staring at her in disbelief. Because I was standing right next to the entrance, Madonna passed me by so closely that I could’ve touched her (but had no intention to do so). This moment was too weird to explain in words. I had seen her during the ‘Drowned World Tour’ but never this close. Of course she’s only human, but a human being that I had adored since 1991. When you suddenly see THAT face that up close, that’s just so incredibly surreal.

She was inside within a couple of seconds and everybody around me started to cheer. I could only stand there, I was just in shock. My boyfriend then took me to the Italian restaurant opposite of the theater to have dinner. I sat down for a minute and just burst into tears! The tears just kept coming and the people around me looked at me in surprise. They must’ve been thinking ‘oh poor girl, did her boyfriend just broke up with her?’. My make up was ruined, my mascara was on my chin! It was just the shock that broke me down, after the tearshed I had a lovely dinner still.

When it was time to enter the theater, we went inside and of course I was searched by the incredibly friendly security guy whom I already met outside. I quickly found my seat on the second row of the stalls and almost got a heart attack when I saw how close the stage was to the seats. I was about 1 and a half to two metres away from the stage, wow this was all too good to be true! When the play started, Madonna was directly right in front of me and I was just in awe of her. I couldn’t believe Madonna would be this close for two hours straight, she was absolutely beautiful. The play was really very good and extremely funny, Madonna’s acting was really convincing. The other actors were great as well especially Sian Tomas as Dawn Grey. It still seemed a bit surreal, witnessing Madonna act right in front you in such an intimate setting. At the curtain call we gave her a standing ovation. Afterwards we ran right out of the theater to see Madonna’s exit. Madonna didn’t take long to come out, she dove into her ride very quickly. But she did have a nice smile for her fans who had waited for her outside. I was a very happy girl, this truly had been a dream come true.

Today we were going to try for ‘returned tickets’, we waited for hours in the queue at the Wyndhams Theater but without a positive outcome. Suddenly we heard the lady behind the counter telling us that she did have some returned tickets for the July 10th show. So of course we didn’t need to think twice about that and purchased those. They were tickets for the Royal Circle on the second row for face value, so that was a great bonus. We decided to buy tickets for tonight’s play from someone selling them on the street. We had tickets for tonight’s show in the Royal Circle but right in the center.

We didn’t see Madonna arrive as she entered through the back entrance instead. The play was again very good, we just loved Madonna’s little laugh. After the play we saw Madonna leave the theater but this wasn’t as great as yesterday. She came out while on the phone with someone and didn’t even try to look at the hundreds of fans waiting for her. She just went right into her car and took off.

Today we decided to see where Madonna lived. We just walked right by the house, we weren’t planning on camping out all day like some people did. We thought it was completely pointless to do so. It was great to see where she lived, but that was it for us and we went on to shop in Oxford Street. That evening we saw Madonna arrive at the back entrance again and took some great up close pictures. The play was good as usual and our seats were excellent. After the play we saw Madonna leave the theater again she was in her car quickly.

The box tickets that we had for tonight turned out to be the very best seats in the Wyndhams Theater. They were in Box 1, this was the box that was placed to the right side of the stage (for the actors to the left) a little above the stage. You were practically on the stage with them, absolutely incredible. This was even better than the first row of the stalls!

We picked up our friend Amon, who flew in especially for tonight’s play from Amsterdam to London. We had a great day and saw Madonna enter the theater. Her arrivals were faster each day that passed, like how fast am I able to enter a theater? When we went to our seats in box 1 we just couldn’t believe it. We had the box to ourselves and we were truly practically on the stage, we could’ve died from excitement! I was just looking at all the people in their seats, when suddenly right below us I saw a man looking very similar to Guy Ritchie. When I took a better look it turned out to be him indeed! I told my friends and we started to try and get his attention. My boyfriend showed his Madonna tattoo to Guy, and when he saw that he started to laugh and whisper into his friend’s ear.

When the play started and Madonna entered the stage, we just sat in shock watching her. What a freaking awesome seat we had, absolutely superb! Madonna was leaning against the pillar a lot during the play which was right by our box. So everytime when she leaned against it, she was basically leaning against our box. She was literally standing right next to us, this was just surreal. We could see her pink blush on her cheeks, her fake eyelashes, her foundation, her incredibly gorgeous green eyes and her roots were very much showing! Suddenly it seemed that Madonna saw my tattoo and her eyes focused on my arm, and her face had this look like ‘Am I seeing this for real?’

But the real highlight for me came at the end of the play. Madonna has this very emotional speech of how she basically lost everything. Real tears were streaming down her cheeks this time (maybe Guy in the audience gave her an extra boost?) Suddenly during her speech she stared right at me. She was standing there while rubbing her hands, because of her wet eyes, the green in her eyes just became that more sparkling than they already were. Her stare pierced right through me and all I could do was stare back at her. After a few seconds, she turned her head away and continued her act. ‘Oh my god’ were the only words I could utter. I know she looked me in the eyes before, but this was an entirely different moment.

With the curtain call we shot some more pictures and ran right outside. When we got outside we found out that we had forgotten to take the bandage off of our camera, so our pics were ruined. Madonna made her exit out of the theatre together with Guy and they weren’t looking all too happy. They too were in their car within seconds and took off. But that couldn’t ruin the best evening I ever had so far!

We were at the Wyndhams Theater to see Madonna’s arrival, but this was her fastest one yet, dressed in an orange tracksuit she practically ran inside. I had a ticket for the Stalls on row 7, which was quite good. It was also my fifth and last date. The play was very good and knowing lots of people in the audience had seen the play before, they started saying her lines before she did. This annoyed Madonna and she said ‘I’ll do the talking okay?!’ After the play we didn’t see her leave, she sneakily used a tunnel for her exit. 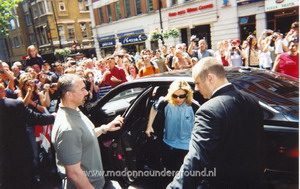 Because we were leaving today (yeah I know, we should’ve added one day) we couldn’t catch the final two plays of Up For Grabs. But we decided to see her enter the theater for her afternoon performance, just a way of saying goodbye. Right before the play was actually about to start she arrived. She took a little longer to enter this time, which gave us the opportunity to take some very last pictures, she however seemed to find the sidewalk very interesting.

Then it was time for us unfortunately to head back to Holland after an incredible experience! Madonna proved that she indeed could be a very good actress, and that she was also so much fun in such an intimate setting. Only outside of the theater Madonna just wanted to go, have her privacy and all, and yes I can fully understand and respect that.

On to the next adventure!