Up For Grabs – in retrospect

UP FOR GRABS – in retrospect 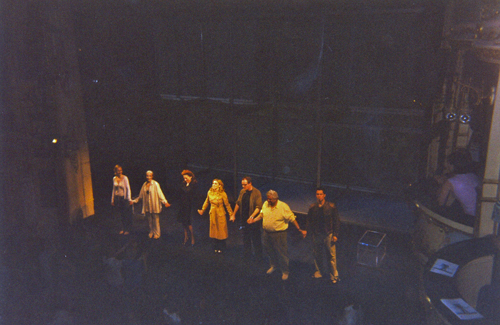 Now that Madonna will be going on her Madame X theater tour, it made me think of my ‘very first time’ seeing Madonna in a theater. It has already been 17 years since 21-year old Kimberly took the Eurolines bus to London in order to attend ‘Up For Grabs’. Madonna would play the leading part in this play by David Williamson in the Wyndhams Theater on the West End.

Still high on my Drowned World Tour adventure of the previous year, this was a big fat cherry on top. Madonna….THE Madonna in a tiny intimate theater, this was something completely different from an arena! This was also my very first time in London and oh boy did that feel like coming home, what a city! We booked a hotel in South Kensington which was not at all near to the theater…..oh so convenient! But in London you take the subway to literally everywhere even though you are guaranteed to end up with black nostrils.

The first night was July 8 2002 and I remember it like yesterday. Overly excited we got off at the Leicester Square stop and walked right up to the Wyndhams Theater. Various fans had already gathered near the entrance, so we joined them. After around fifteen minutes very rude security pushed us back using iron gates. A black car with blinded windows parked onto the sidewalk and instantly there were camera’s everywhere. There I was holding my camera from the year zero feeling like riding a rollercoaster and descending (you know the feeling, something they like to call butterflies in your stomach, but I’m a vegetarian).

Super casual Mrs. Ritchie (at the time) passes me by and enters the theater dressed in a dark blue Adidas tracksuit and large sunglasses. As small as she is, you instantly 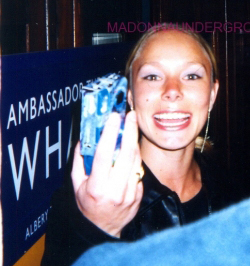 recognize that walk. That camera from the Middle Ages refused to work, except making me look like a total fool (not that I didn’t already). Pissed at not having a photograph of THE moment, the other fans immediately checked out their footage and photographs of those important few seconds. We decided to grab a pizza opposite of the theater (food is always good). Sitting in my chair for only one minute and I was bawling my eyes out. You should’ve seen the people in the restaurant, those glances full of sympathy. Oh poor dear did your boyfriend just broke up with you? Where it did come from I don’t know, either it was my time of the month or I was back in my teenage years and bothered by hormones.

That night I sat in the second row in the stalls and saw Madonna in a way I have unfortunately never seen since. Imagine being in a stunning theater, small and intimate, the curtain rises and there she is in all her glory. Madonna and her Louis Vuitton bag who portrayed a fabulous Lauren with a quirky laugh. It was simply brilliant to experience this, the biggest star in the universe (right now as we speak…if you don’t understand watch ‘Material Girl’) acting her little heart out right in front of you. The play was fantastic and yes Madonna was just as good.

The remaing days of the week I was lucky enough to attend four more shows and see her arrivals and departures from the theater. Madonna wasn’t always the friendliest to the waiting crowd. The absolute low was when she left the theater talking to someone on her phone and looking at the floor. But to be fair, if I was obligated to smile at a waiting crowd each night who wanted to witness every single drop of sweat on my forehead, I would’ve done the same. But the fantastic things I did experience, such as that night that Guy Ritchie was frantically trying to blend in and not be noticed by the fans, accomplishing the opposite. Calling a man ‘fried green tomato’ because he thought that ‘Up For Grabs’ sounded like something Madonna would star in.

After ‘Up For Grabs’ I have always hoped for another chance to witness her in a theater setting again. Well it took 17 years but it seems like Madame X will finally grant that wish. No play this time but musically (and maybe she can’t help include a bit of stand-up comedy). I personally can’t wait to see what Madame X will come up with, but I am sure she will be worth every single penny. Madame X is an…..entertainer!