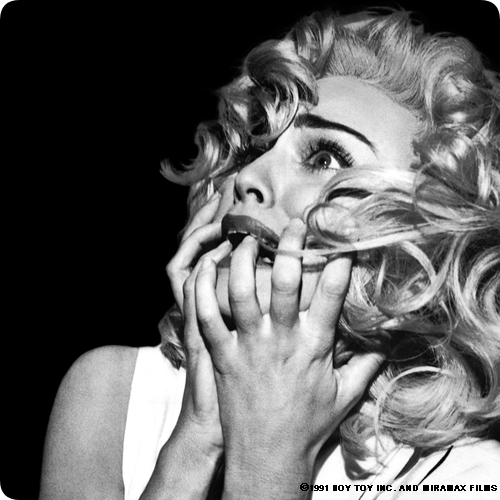 Truth or Dare is a snapshot of stardom in 1991, before fame was something that existed in people’s pockets. Pop documentaries have surged in the past decade, with many younger artists striving to make their own versions of Truth or Dare. Try as they might, Beyoncé, Taylor Swift, Billie Eilish, Lady Gaga, Katy Perry, Justin Bieber, the Jonas Brothers, Ed Sheeran, Demi Lovato, Ariana Grande, Shawn Mendes, and Coldplay can’t quite replicate the novelty of early-’90s Madonna. (Time will tell whether Pink, Nicki Minaj, Rihanna, or Alicia Keys can do any better.)

Truth or Dare wasn’t initially designed to be so personal. What began as a traditional concert film ripened when director Alek Keshishian observed the seven dancers, two backup singers, and dozens of attendants in Madonna’s retinue. What came next was less a celebrity-branding ploy than an organic peek behind the Blond Ambition Tour’s curtain. Madonna funded the roughly $4 million project herself, according to producers Tim Clawson and Jay Roewe, but she and Keshishian created a new approach to storytelling, unburdened by any rule book.

What’s most striking about Truth or Dare 30 years later is that, unlike the subjects in today’s pop docs, which tend to emphasize solitude and struggle, Madonna looked like she was having a ball. In the vein of the Old Hollywood luminaries she idolized, she adores being famous; she’s good at it — or at least she was, before becoming hyperdefensive over the past few years. Long before social media warped celebrities’ self-perceptions, Madonna understood the mechanics of fame in a way that some of her peers did not. “Even if the camera followed me around for my entire life, how can you ever really completely know me?” she told MTV’s Kurt Loder when asked about the film’s limitations.

At the time, mystique was thought to be fame’s ultimate fertilizer, and Madonna’s then-boyfriend Warren Beatty scoffed that she “doesn’t want to live off camera.” Beatty wasn’t wrong, though: Madonna was an exhibitionist before everyone became exhibitionists. She came across as a freewheeling den mother and a haughty taskmaster rolled into one charismatic package, reflecting an age when celebrities weren’t yet required to seem “just like us.” As a result, people didn’t know what to do with Truth or Dare other than gawk — and boy did they. Arriving during Madonna’s imperial phase, the movie further heightened her notoriety. Until Fahrenheit 9/11 in 2004, it was the highest-grossing documentary in history.

Nowadays, pop docs are often produced in conjunction with an artist’s record label or management team — a glorified PR exercise designed around a curated thesis. (Taylor Swift cares about politics after all! The Jonas Brothers aren’t just Disney Channel twerps!) But Truth or Dare had less to prove. There wasn’t a huge precedent for the level of access that Madonna granted, which makes it both quaint and revolutionary. This is the story of the film’s alchemy, as told by Keshishian and several others who made it happen.