The Number Ones: Madonna’s “Crazy For You” 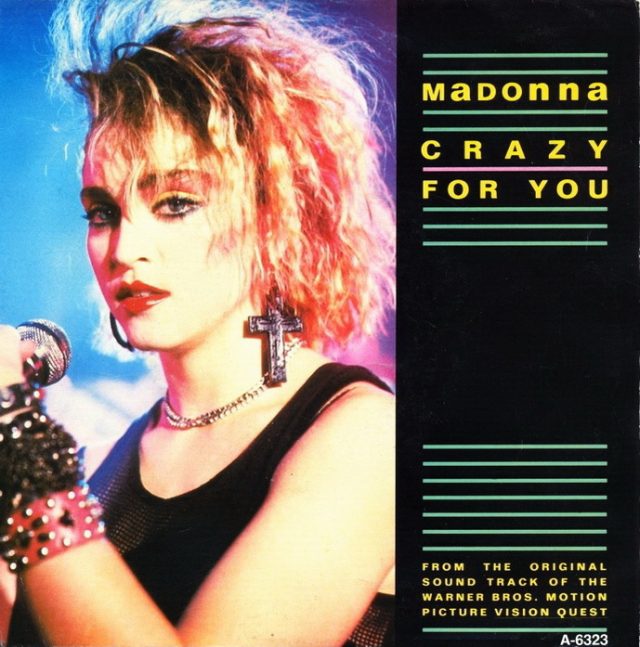 In The Number Ones, I’m reviewing every single #1 single in the history of the Billboard Hot 100, starting with the chart’s beginning, in 1958, and working my way up into the present.

In the video for her 1985 single “Material Girl,” Madonna essentially re-staged one of Marilyn Monroe’s musical sequences from Gentlemen Prefer Blondes. That moment is an early sign that Madonna understood her own iconography right away. She was willing to make those connections to past screen legends explicit, to present herself as being part of the grand American sexpot continuum. When “Material Girl” reached its chart apex in the early days of 1985, Madonna had already made her way into the mutliplexes of America. (“Material Girl” peaked at #2. It’s an 8.)

A pre-fame Madonna actually made her film debut way back in 1979, when she starred in a cheap and notoriously shitty exploitation flick called A Certain Sacrifice. That movie went unreleased until 1985, when whoever owned the rights attempted to cash in on Madonna’s newfound fame. But Madonna’s first real film appearance is a quick scene in Vision Quest, one of many variations on the Rocky formula that came out in the ’80s. Vision Quest isn’t a huge movie, and Madonna’s appearance in it amounts to a one-scene cameo with no dialogue. But that one scene might still be the most famous thing about the movie.

In Vision Quest, human Labrador Matthew Modine plays Louden Swain, a high-school wrestler in Spokane. Louden spends the movie desperately trying to cut weight so that he can take on an undefeated mythic figure named Brian Shute. Along the way, he gets into an affair with an older woman, an art student who’s renting a room in his father’s house. (That woman is Linda Fiorentino, who looks like she will eat Modine alive.) Somewhere along the way, Louden wanders into a bar, and Madonna is just up there, singing for an apparently-disinterested clientele — something that seems just as implausible as Louden’s eventual victory over Shute.