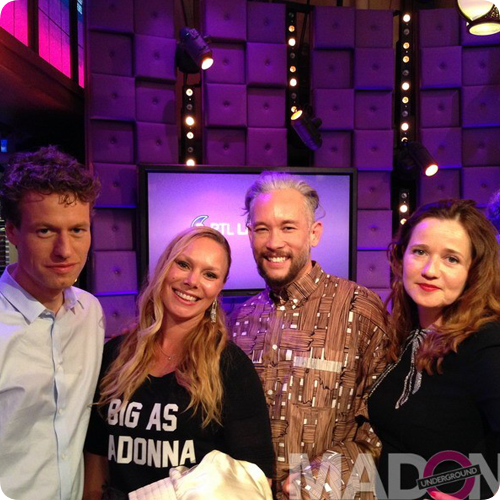 RTL Late Night is one of Hollands’ most popular TV shows, so it is of no surprise at all that the gorgeous Jose, Luis, Salim, Oliver, Kevin and Carlton were a part of it to promote ‘Strike a Pose’.

These men looking absolutely stunning were here to promote the beautiful and not to be missed ‘Strike a Pose’ documentary by Ester Gould and Reijer Zwaan. Humberto Tan mentioned the documentary throughout the taping of the show and scenes from the Blond Ambition Tour (from Truth Or Dare) were played on the screens.

The first half of the show was kinda forgetful (sorry) but thankfully it was finally time to witness these incredible men talk about their documentary. It’s funny because it is a fact that many of us grew up watching them. For me personally it was ‘Truth Or Dare’ that turned me into a die-hard Madonna fan, and boy was I love with those dancers. Not to mention how jealous I was of their incredible bond with Madonna, it was such an amazing film and groudbreaking live show.

It’s fabulous that after so many years I finally see them here together with Gabriel present in spirit. They spoke to Humberto about the film, how they truly had not seen each other for many years after the tour, how it was to be reunited. They also discussed hiv and how they dealt with that while on tour. Oliver said he used to be homophobic until he met these men, and it truly changed him for the better.

The most surreal and impressive moment was when they got to VOGUE with each other for the first time in 25 years!! SURREAL and oh so great. I felt like a little girl again watching these beautiful men striking a pose and felt proud and thankful to have been a part of it.

After the taping of the show (which aired live) we got to hang out with the dancers and directors and have a chat. Of course many attendees wanted to take a picture with them, no problem at all as they happily posed with them. I personally can’t wait to see them again Monday when the official premiere for Strike a Pose finally happens in EYE in Amsterdam.

I love ya and enjoyed ya, see you on Monday