It’s been years since I was here and a Madonna show is a good excuse to visit this largest city in the world again. In the smallest hotel room for that matter, but I didn’t care because a) I will be out on foot all day and b) there is a super modern gym with swimming pool downstairs.

This time I am not by myself, but my Madonna buddies Kimmy and Hans join me. Together we have experienced quite a few Madonna related adventures, only this time we take things easy. No spending the nights on the street, no stress in a boiling hot 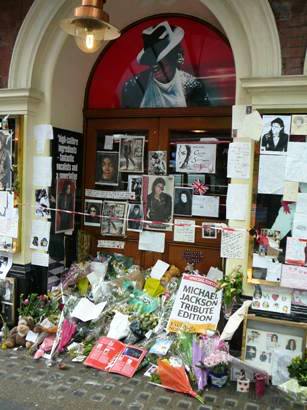 stadium. The arena where Madonna will perform is seated and we have acquired amazing seats. Yes indeed they cost a fortune.

Friday – after we arrive we do a little sightseeing. On some spots in the city there are memorials for Michael Jackson, who passed so tragically only a week earlier. It is very impressive: notes in every language imaginable, so we see writing in Arabic as well. Some messages are true pieces of art with pictures and drawings. Further there are a lot of flowers, candles and stuffed animals. We take a moment and think of how easy a life can slip through your hands: Hans’ heart attack, witness a serious accident, saying goodbye to loved ones…..Madonna will perform in the O2 Arena tomorrow, the place where Michael would be performing only a few days later. Michael Jackson was for Madonna as an artist a true inspiration, with his songs, video’s and shows. Both 50 and on top of their game for many years. It makes sense that they’re both named the king and queen of pop. With Michael we lose a remarkable man. We feel and share the sorrow of his fans. Heaven has gained an incon; here on earth his music lives on.

Saturday – Today we each do our own thing. I don’t want to walk too far in the city as I’d like to be on time for the show tonight. We can’t ride the tube to the O2 as there is construction work going on, so we go by boat and certainly don’t want to miss it. Further we still have to pick up our tickets at the box office. We are tense, this because we still don’t have the actual tickets in our hands. Of course our order is confirmed and ok (on paper row 4 in front of the catwalk is confirmed), but of course we can only believe this when we are there. On my way I pass the Luis Vuitton store. Madonna is in their promotional campaign and promotes their mega expensive and ‘not so easy to carry around with you’ bags and shoes. Quickly I take few shots of the ad’s on the side of the store, before I may be hit by a car or bus. I find out that the Gay Pride parade is going on, so it is hard to make my way through the crowd. A tiny walk now takes up a full hour. Tropic rituals as it is around 32 degrees.

In the hotel we get ourselves together for the show. First we stop by at a noodles places for some much needed calories. Then back to the hotel once more, because one of us has a headache and the other needs to use the toilet (no surprise there as it is all part of the pre show nerves). Beneath the London Eye we wait for our boat. The trip is fun on the Thames from the Big Ben, passing the Tower Bridge to….the O2. There we find another memorial for Michael Jackson. A huge beautiful picture has been put up and here are letters and flowers as well. I brought a shell from the beach in Scheveningen in Holland that I put in with all the other tributes. Much more quickly than I thought we have our tickets in hand. Again we wait…..as usual Madonna starts her show way too late. In open

stadiums the show only starts when Madonna feels it is dark enough so that the lighting and the screen projections can be seen as they were meant to be seen. But this is a closed off arena, so we cannot think of another excuse apart from: what the lady wants the lady gets. Probably took some time for VIP guests because right before the show, famous designers Valentino and Stella McCartney arrive for their seats on row 1. Lights out.

The show is mainly the same as the performances we saw in 2008; this is the extention of the Sticky & Sweet Tour. There are a couple of changes in the costumes (much better) and the setlist (thank god one less guitar related song). The video images for the opening number are different too, but I am so fascinated by Madonna that I barely see anything else on stage. This is why I prefer to attend more than one show of my idol, there’s too much going on to be seeing this just once.

Biggest difference with last year is of course Michael’s recent passing. Not only that but Madonna starts her tour in the same arena where Michael would be starting his show as well. We had speculated already: 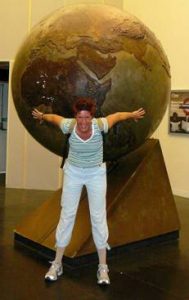 Madonna would certainly be doing a tribute to him. But a Madonna show is a Madonna show, so it will probably just be that. No….we are surprised but an amazing tribute to Michael Jackson! In between two of her songs suddenly we hear the music to Billie Jean and a dancer appears on stage dressed and dancing as Michael Jackson. On the video screens we see beautiful pictures of Michael. A medley of Michael’s hits follow with a spectacular performance by the dancer, while Madonna is in the background. We hear later that this dancer wanted to audition for Michael’s shows as he was a huge fan, but had already signed on for Madonna’s new tour. In the show we see some more Michael references: on the screen at one moment we read ‘if you wanna make the world a better place, take a look at yourself and then make a change’ and the white glittered glove that Madonna and dancers wear during the last song. I get the impression that Madonna enjoys the show much more. She interacts with the audience much more and smiles every so often. She comes off as more relaxed.

Sunday – after the impressive show I spent my last day sightseeing in London. I do a little bit of the Princess Diana memorial walk, which is mainly through parks. In the middle of the city I see exotic ducks, squirls and a pelican. Of course the route goes to Buckingham Palace. My walk continues because the Natural History Museum is my main goal today. I walk by the Science Museum, that I enter for just a bit. Comparing this to my last visit from a few years back, nothing has changed. I had expected something new, as this month (July) it’s been 40 years since men first set foot on the moon. So I enter the Natural History Museum a little earlier than expected. Thankfully as there is so much to see in this beautiful building. Times flies by and a little before closing time I leave the museum. My feet are tired, so I take the bus back to the hotel. There I swim in the swimming pool.

Monday – spent some time at the gym, finish my last English meal of this trip and say goodbye to my friends Hans and Kimmy. They will continue with the Madonna tour, but for me it is over. I enjoyed our time together, the sharing of a tear and a smile, Madonna and my time in London. Life is worth enjoying it!