REVIEW | Madonna: a true rebel with a heart 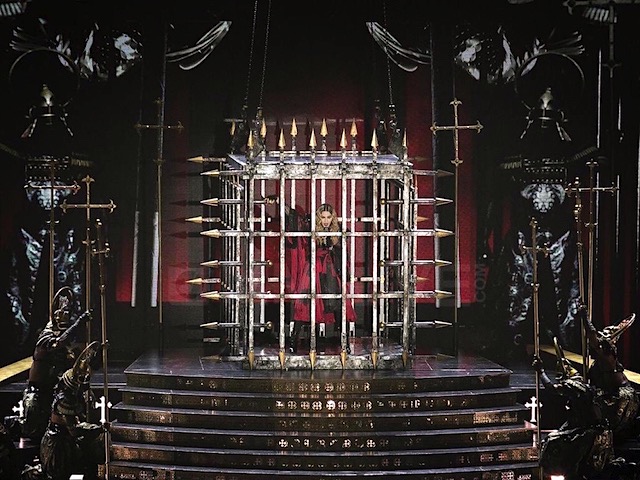 For her grand entrance Madonna descended onto the stage in a cage from high up in the ceiling. For her exit two and a half hours later she ascended back to the air while singing her very first hit, “Holiday.” (That it was already past 1 o’clock in the morning of February 25, a real holiday, made the entire number even more surreal than it was.)

In between those bookends was a show that many if not most in the audience will not soon forget. Not only because “Rebel Heart Tour” was the first-ever live performance of the Queen of Pop in the Philippines but also because it was a spectacle of the highest order.

The stage alone was already worth a big fraction of the cost of admission. (Apparently it’s worth a big fraction of the cost of production, too.) It had a massive backdrop composed of three giant led screens that showed fantastic video images to accompany the live performances. It also had a long cross-shaped ramp, with a heart-shaped tip, that practically extends to the other end of the orchestra section. And scattered throughout the stage are 7 hydraulic lifts that serve as entry and exit points for Madonna and her dancers.

The niftiest feature of the stage, though, is a big panel at the very center that has different functions. Sometimes it’s a vertical led wall, sometimes it’s an angled slide, sometimes it’s a flat platform. There simply hasn’t been anything quite like it on the local concert stage.

The sets and props were also sights to behold. They include a car shop set-up, a swirling staircase (that came from and went back up to the ceiling, for a single number at that), a Last Supper table, and several wildly bending poles that hoisted dancers some 20 feet in the air.

So how was the performance that the stage hosted? Madonna showed why she is the grande dame of pop concert artists. Her terpsichorean days as a dancer may be behind her — gone are the complex choreographies and nimble athleticism even of her last tour, MDNA — but her full commitment and her dowager-like command of the stage remain fully intact. There is still a whole lot of movement throughout the show, including hanging upside down from a horizontal rod and pole dancing, that will certainly tax performers half her age If they ever decide to put in that much effort. 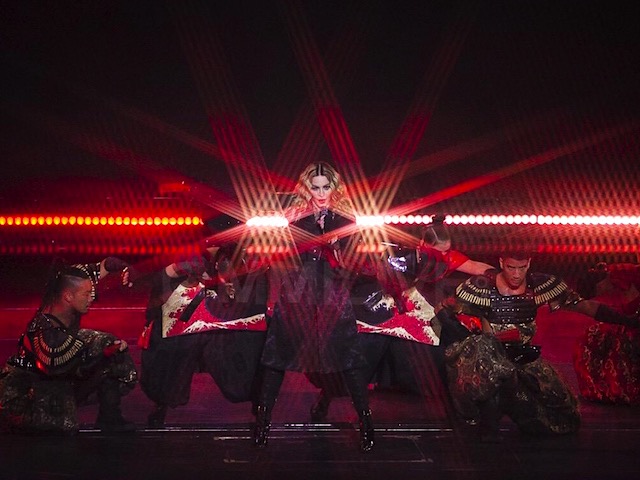 The singing was surprisingly good especially for someone who is still derided for her vocal talent. Madonna now has a low, rich, full voice that was showcased fully in the show’s many slow and stripped down numbers. These include acoustic renditions of “True Blue,” “Who’s That Girl,” the French classic “La Vie En Rose,” and “Like A Prayer,” the chosen “request” song of the night that brought the house down and was one of the set’s highest highlights.

The biggest difference and main surprise of Rebel Heart from her previous tours is how unrigid Madonna is. Where there was a roboticness and remoteness in previous treks there is now playfulness and enjoyment. Whereas before she seemed to be working hard to give her audiences a grand time, it now seems that she is having a grand time herself. In fact there were a few times in last night’s show where she was very in-the-moment spontaneous, including singing a couple of lines a capella from the “West Side Story” song “Maria” for the audience member named Zoreena who caught the bouquet that she threw during a spiel following “Material Girl.”

Thematically the Rebel Heart Tour continues to tread on the now very familiar themes of sex and religion that have been a major part of the Madonna canon since day one. And it may be easy to charge her with “reductionism” (look up “Madonna reduction” online) of her own work especially if you take such numbers as “Holy Water” and “S.E.X.” on their own and on the surface, but that would be missing the new context she is working on. She may still be firing up and fanning the same flames (the rebel half of the show) but she’s now doing it within the framework of love (the heart part).

And that’s Madonna version 3.0 for you — a true rebel with a heart.