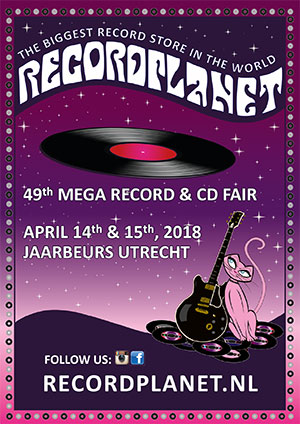 Once again we can give you a discount code to use when purchasing tickets to the 49th edition of the mega record and CD fair in Utrecht April 2018.

The code to use is: DISC3

On Saturday the 14th and Sunday the 15th of April the 49th Mega Record & CD Fair will take place at the Jaarbeurs Utrecht, the Netherlands. This biannual show – as always held in conjunction with the International Collectors Fair – is renowned as the greatest record fair in the world by DJs, experts, collectors and fans of pop music. Over 500 exhibitors from all over the globe will display the collected history of pop music from the past sixty years in the shape of singles, albums, 12-inches, CDs and DVDs. As usual the programme includes live performances, signing sessions and guest deejays. This edition of the fair will highlight in particular the history of Disco.

The exhibit: 45 years of Disco Fever is curated by Patrick Lejeune and consists mostly items from his own collection. Lejeune who is better known as DiscoPatrick has been collecting since 1978. In collaboration with Patrick Vogt he published two books. The most recent one, Disco – An Encyclopaedic Guide to the Cover Art of Disco Records, was published in 2014 by SOULJAZZ in London, and is the standard book on the subject. The exhibit has been built up with the use of a timeline that starts with the birth of disco in 1973, the beginnings of the DJ-culture, the creation of the remix, the birth of the 12-inch, and the debut of the synthesizer.

The main attraction of the fair remains the gigantic assortment of records on offer. Partly thanks to young people‘s enthusiasm for deejaying, vinyl is hot again. There is no fun without vinyl – in pubs, at parties, at home and all kinds of gatherings playing records is a must. The crucial accessory at the last couple of Mega Fairs was the portable record player to listen to vinyl on site before buying.

Shandon Sahm, long time drummer of Indieband the Meatpuppets and son of the legendary Texan musician Doug Sahm (Sir Douglas Quintet, Texas Tornadoes) will perform songs written by his dad live at the fair. Furthermore, there are performances by Yorick van Noorden (ex the Hype) and Miss Twist.

Like at the last editions English company Omega will auction some rare vinyl albums and singles. At one of the last auctions at the fair the White double album by the Beatles fetched over € 20.000 and a postponed single by the Sex Pistols over € 7000. Record Industry from Haarlem will launch Passion for Vinyl part 2, written by pop journalist Robert Haagsma. The Three Imaginary Boys presents the Pop quiz with loads of free prizes like concert tickets.