Let me tell you one thing, I have seen Madonna 7 times this tour, that is one time less than in 1990, but I have never been as tired as I am now!

We made our way to the Airport because tomorrow Madonna would give her first show in a row of four in Wembley Arena in London. We had VIP Platinum Tickets which meant that you had a seat guaranteed within the first 20 rows, you got a drink and

something to eat before the show and a tourbook.

When we arrived at Wembley Arena we were escorted to the arena and then had to find our seats. We had seats on row 12 in Block A3, right in the middle. The show was absolutely amazing, Madonna just made one teeny tiny mistake right before Crazy For You’ as she screamed ‘Don’t Call Me Esther!’ And then she completely fucked up, and she went to lay down on the stage. The show was over before I knew it, there was just too much happening. After spending one more day in London, we had to go back to Holland because we still had to work. Now I just had to wait a bit over a week before my real tour would start in Paris! 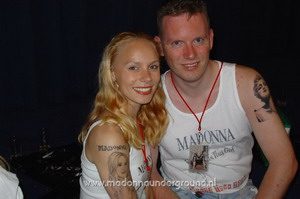 It seemed like an eternity but then finally after 9 days of work, I closed my shop. On Friday September 3d we had to be on the Central Station in Amsterdam at 5 AM. We were going to Paris by bus, I told Peter when we took our seats in the bus that this was going to be a disaster due to the lack of space. Of course there were way too many stops on our way to Paris, so it took an eternity before we actually arrived. Our hotel was a long way from Bercy, as we couldn’t wait we bought tickets for the tube and headed to Bercy.

It was extremely busy at Bercy, so many people were already waiting and just walking around. We were like, we’ll just see how we get in and where we’re going to stand. There were so many crazy fans out there who literally hit their heads in order to get to the front. Friends of ours (Simon & Kimmy) were in the pit. We had met them today before and ate something with them. After one hour of standing in the queue we finally got to go in and found a spot on the right side of the stage. It occurred to me that you didn’t quite need to be queuing for days or hours, as I could easily find a front row spot.

It took Madonna almost two hours before she appeared on stage, but when she was there, the crowd just went crazy. Pushing, pulling, screaming, shoving and fights! I have never experienced anything like this and it was kind of frightening. We decided to go a little back to the side, but there we were standing in the pathway of people walking. Right in front of us a fight started, first no action was being taken, but later they got thrown out. The show as absolutely perfect, but due to the many fights and stuff I didn’t enjoy it as much. When we left Bercy there were lots of people who wanted to take a picture with me and my Madonna tattoo, which was a lot of fun!

The next day we went into Paris on our own and did a bit of shopping. When we were walking around the Champs d’Elysees in the afternoon, we decided to go and check out the hotel where Madonna was staying. But at around four when Madonna exited the hotel, my camera gave out and so I missed the chance of taking a picture or seeing her. Thank god Peter managed to capture her on camera!.

The show was again amazing, we were standing in the back but got a great overall view on the show. After the show we ran into the documentary crew who were filming Madonna fans (they filmed Kimmy as well in London). Then we took the bus back to our hotel.

The next day it was sightseeing day with our tour bus, but there was little time for each sight that we got to see, so didn’t see much. Later on the bus made it’s way back to Holland, where we got into a fight with some girls in front of us who forgot that there was lack of space. We only arrived in Amsterdam at midnight but were very happy to get off the bus. Now it was time to go home and get things ready for Arnhem! 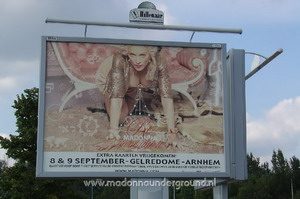 We (me, Kimmy & Simon) arrived in Arnhem in the afternoon, we booked a little house for us and some friends. It all looked clean and good, but didn’t have much space in the bedroom. When we went to 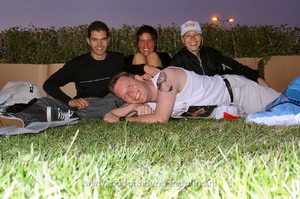 the Gelredome and arrived there we got our first disappointment, we were told not to queue already, we were only allowed to queue from the next day. We decided to queue anyway and sat down on a parking lot. But in the evening we got a warning and were told to leave the area.

Early next morning we went back to the Gelredome and then were escorted to our entrance. Mrs. Ritchie decided to do a very late soundcheck which resulted in the fact that us fans had to stand squeezed between each other outside between the gates in the very hot sun. I am getting too old for this!. Finally the doors went open and we just ran, we found a spot on the right side of the stage. The show was very very good, but Madonna was a bit pissed because of certain things (screens that didn’t work properly, sound wasn’t good, audience wasn’t good etc.). We had a wonderful evening and decided to take a different exit then the rest of the crowd. And there we bumped into Donna Delory, I took a picture with her and finally had the time to tell her that I thought she was great. Then back to our rented home and to our beds! 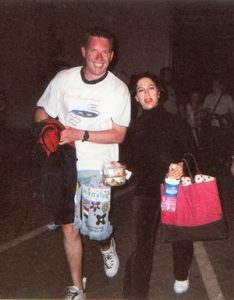 Today we decided to take it slow and try out for pit, I had standing tickets again while Kimmy & Simon had seating tickets as they wanted to try and film some of the show. We went to the Gelredome at around 6 and waited for Allison. First she handled the winners and then I approached her telling her I had never been in the pit before. And yes I actually went down on one knee and believe me I have never done this for a woman before! She looked at me and said ‘don’t be foolish, get up, you’re in!’. I was extremely happy that I finally got to go into the pit! I got my wristband and was escorted into the pit on the left side (the right side, where M sings crazy for you and nothing fails).

There was only one small Italian in front of me so I had an amazing view. Oh my god, I never experienced anything like this, I was soooooo close! The closest I have ever been to Madonna in my whole life! I could see everything, how she got ready to get on stage etc. During Imagine she walked right up to me and shook my hand while looking directly at me. And now tears started falling down my cheeks! Then she walked away without shaking anyone else’s hand. Finally after 20 years I shook her hand!! I completely lost my voice and the show went even faster now in the pit!

The next day I got my stuff together and headed home, once at home Kimmy called to say that we could order tickets through Madonna’s official fanclub which were special Family & Friends tickets. So of course we did!

Sunday I went to the airport in the evening and we flew to Lisbon at around 22:30. We arrived in Lisbon and in our hotel after midnight. We had a funny night of light sleeping.

My throat hurt like hell the next day, we read in the newspapers that people had been queuing for three days straight outside the stadium!. There were two different kind of standing tickets, VIP (for the first section) and normal standing. We had VIP standing so could walk in whenever we wanted. It was very crowded at the stadium in Lisbon and we decided to go to the back entrance and ran into some dancers and the crew etc. We entered the stadium around 8, it wasn’t crowded at all so we walked up to the second row on the left side. During the show (which was amazing) I got the chance to thank Allison for letting me in the pit in Arnhem. After the show we went to the hotel and had a slightly better sleep then yesterday. 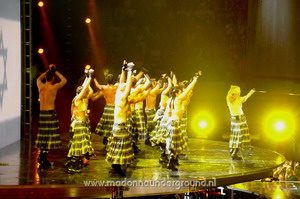 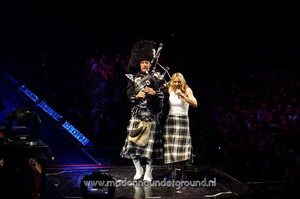 We had a long day ahead of us tomorrow as we had to fly back to Amsterdam at night. We decided to do some shopping, but were finished pretty soon. At 6 we made our way to the Stadium and got something to eat. We went to the box office to see if our tickets had arrived yet, unfortunately they hadn’t, so we had to come back a couple of times. Finally when we got them we went inside the stadium and found out that our seats were amazing. We were on the left section on the very first row!. Truly amazing seats, I brought my camera so could make lotsa pictures! Before the show started we saw Madonna preparing herself to go on stage backstage. Yes it was the very last show of the tour and after ˜Papa don’t Preach’ Madonna started to cry a bit. And I didn’t cry, although it was hard not to.

After the show you could clearly see everyone hugging Madonna backstage, very nice to see this, a moment to cherish! We then went back to our hotel, got our stuff, waited in on the stairs at the reception, took a cab to the airport and waited there until we could check in at four. At 6 in the morning we flew back to Amsterdam and I arrived back home early in the morning and just went straight to bed.