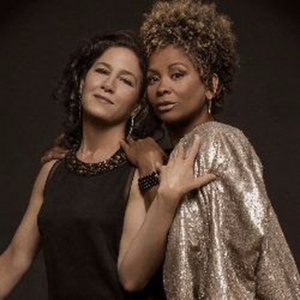 Acclaimed recording artists and Madonna’s famed backup singers Niki Haris and Donna De Lory will reunite for a night of nostalgia in which they share the soundtrack of their lives at Mmhmmm in the Standard Hotel in West Hollywood on Friday, November 22, at 7:30pm, it was announced today by Chris Isaacson Presents.

In this singular celebration, these soulful sisters will serenade the audience with perfect harmonies crafted from Niki’s jazzy belt and Donna’s breathy tone. Their music carries a rare kinetic energy forever pulsing between these kindred spirits. Each song is a defining moment among the many stories they’ve amassed over their stunning careers as they track their personal evolution from backup singers to solo artists to motherhood.

Niki Haris is the daughter of Grammy Award-nominated jazz pianist Gene Harris. She has toured the world’s biggest stages from Carnegie Hall to Wembley Stadium, Lincoln Center, Staples Center, and everywhere in between. Known for her jazz, gospel, pop, and deep house vocals, she has performed with jazz greats like Stanley Turrentine, Red Holloway, and Ray Charles, as well as pop superstars Sheryl Crow, Whitney Houston. Along with singing backup for Madonna on four world tours, she appeared in the movie Truth or Dare and acted in the videos for Vogue and Music.

Donna De Lory comes from a musical family helmed by her father Al De Lory, legendary keyboard player for The Wrecking Crew and Grammy Award-winning music producer. She has been performing professionally since she was eight years old. Her vocal work can be heard on albums by Carole King, Leonard Cohen, Carly Simon, Jewel, Ray Parker Jr., Kim Carnes, Laura Branigan, Belinda Carlisle, Selena, Bette Midler, Aisha, Barry Manilow, and more. For nearly 20 years she worked as a backup singer and dancer with Madonna, beginning with the Who’s That Girl Tour in 1987 and continuing through the Confessions Tour in 2006. As a recording artist, she has released 14 solo albums including her most recent, Here in Heaven. In 2016 she teamed up with Niki Haris to record their rendition of Madonna’s 1993 single Rain, for which the pair provided the original backing vocals.

Admission is $35-$75 (VIP and Artist Circle available which include post-show meet and greet) and tickets may be purchased online at www.ticketweb.com or by phone at (866) 468-3399. Doors open at 6pm for cocktail and dinner service (minimums apply) and showtime is 7:30pm.

The Standard Hotel is located at 8300 Sunset Boulevard in West Hollywood, 90069.