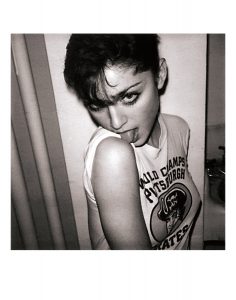 “This was a curious one. There was a guy called Bleecker Bob who had a store in the West Village called ‘Bleeker Bob’s Golden Oldies.’ In my early years in New York, he would sometimes bring aspiring singers to my studio on Madison Ave. and 32nd. I would take snaps of all of them and [Madonna] came up one summer evening. She seemed very ambitious. I recall her being friendly but mostly curious, just having a look around. I don’t recall her being obnoxious in any way, she was just young. She was curious about Lou Reed and Bowie. Everyone wanted to know about David.

This is 1980, so she’d only just about got here. I don’t know if she was even doing music at this time because she came to New York to dance. The shot didn’t take very long, it’s not constructed. I wasn’t telling her, ‘Baby, stick your tongue out’. She did all that. She’d do whatever it takes to get a bit of attention.

For years I never thought much of this picture. It’s not one of these apocalyptic shots of her, like I shot of some other people. On the other hand, I see why people like it because she’s so raw. Not in an unpleasant way, there’s nothing wrong with it. I’m very happy to have got this Polaroid now that she’s a big spirit in the sky. I mean, does she rank up there with the big ones? In a way, she does. Not so much for the music but for the way she put herself over. This was at a time in the eighties when it was so unbelievably sexist in music, so you’ve got to respect her. It’s not easy. I don’t think she ever had a drug problem. She was fueled by ambition, god bless her. There’s about another five of these polaroids and I can’t find them. I’ve got to find the rest of them because this is the stuff that people love.”