My MDNA report – by Dave

Saturday the 16th I already arrived in Barcelona, spent a few days on the beach, met a few Madonna friends from England and Russia, had a great time. The guy from Russia was able to tell me that by Tuesday there were already around 65 people at 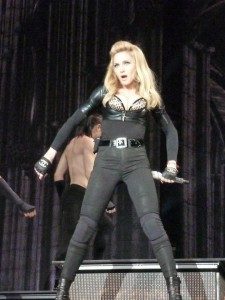 Panick attack, and decided to go to the arena immediately together with a friend of his. We bought a tent and airbed at Decathlon and arrived at the stadium around 21.30. Everything was well taken care of, because there was a list with numbers we came in at number 147 & 148.

Usually these list never work, but now it somehow did. Everything was being taken care of, and was even checked twice during the night to see if everyone was still there. Around 9am we had to queue in order of our number, the doors to the stadium would open at 10am. Eventually this took a bit longer than expected. Per a few fans we were escorted inside and it all went well. So here again we were laying behind each other in between the gates on order of numbers.

I met some of my Spanish friends early in the morning. Pabo a friend from Tenerife, used to be a penpal of mine through ICON, yeah in the early days way before internet there were penpals from all over the world. Thankfully through Facebook I have been in touch with him for a few years now. I saw him for the first time in person again at the show in 17 years time (I kinda feel old now as most of the Madonna fans are around that age, or at least early 20’s).

Was very happy to run into my friends Tanja and Wendy, I didn’t see them much the first day because they had Early Access tickets. I also ran into Hans and Kimberly, always a good time! I tend to be very happy when I meet so many great people through Madonna. I was also wearing a shirt made by a fan through ICON, this was available to order through the unofficial Icon Facebook page. Which I had done for only $15, about four Iconers addressed me about it that day.

I am crazy about the city Barcelona, have been there for over 30 times now. But when it comes to live shows the Spanish fans are extremely fanatic, it is also quite difficult to get in touch with them. Thankfully the 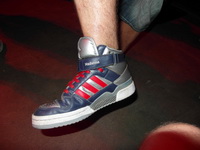 people around us were very relaxed. The Russian girl walked around a lot, and I did my own thing. Love it when you can make your own plan.
Because the people around me were extremely relaxed, I could walk around a bit and use the toilet. Suddenly we heard that the lady with the iPad was coming. That is someone from Team Madonna, when she reaches you, y ou can touch her iPad and she will tell you whether you are in the Golden Triangle or not. I understood this was meant for only the first group of people, I decided to not go through much trouble as I never get lucky. But decided to go anyway, after some pushing and shoving I was front row at the gate. She was right near me but then suddenly walked away, decided to hang around for a bit. When she came back the people in front of me all received a No Entry. Then it was my turn……yes you won a Golden Triangle ticket’…..I had to shed a few tears.

A little while later we had to go to a different queue, which was around 5. All Golden Triangle winners were lined up at this port. Around 7.30 the gates finally openend, suddenly we all had to move back and form a 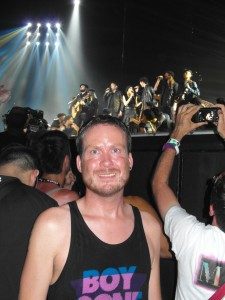 queue. Of course this was hell as nobody wanted to ditch their front row spot. After a lot of issues there was finally some movement in the queue, but it didn’t move fast enough. Then they started to threat with cutting wristbands, I then left the queue because surely it would be mine to get cut. Terrible situation as they had over 2 hours to address us of the new situation.

Once inside I entered the Golden Triangle and to my surprise Hans and Kimberly were there as well, good times! At one time went out of the pit to get something to drink, super relaxed.

Suddenly this beautiful guy walked into the pit on our side. Almost all the girls came up take pictures etc. We had absolutely no clue who he was so I decided to ask him in my best of Spanish. He was a model…very funny because a little while after this he spoke to Kimberly and Hans, he was talking to his sister on the phone and she had seen them on Spanish TV. His name is Jon Kortajarena and he is a star in the Girl Gone Wild video.

Martin Solveig’s gig was a lot of fun, talkative and spinned a lot of Madonna, was getting really into it by now. Around 22.15 it was finally time!! MDNA started and how……Incredible was an energetic show. M is in the best of shape, she never danced so much and she looks amazing. She radiates on stage, has the energy and power back in her eyes. The stage beast is back, something I missed during S&S. She is really having a good time, you can clearly tell.

Because I don’t want to spoil, I will not share details on the show. Just want to say that twice she was extremely close, almost could’ve touched her, unfortunately security pushed my hand away. The feeling you get when your idol is this near, is indescribable.

Afterwards everyone had to leave the triangle and were outside in no time. I know Barcelona very well and walked out with hans and Kimberly to our hotel, reached that within 30 minutes. First I had planned to queue up immediately for tomorrow’s show but decided to grab some rest in order to be fit again. The 2nd day would be a relaxing day. Went to the beach with Tanja and Wendy and a friend of theirs. Ate something and entered the stadium around 19.00. Incredible but we were already inside at 20.00. I wanted to view the show now from the end of the triangle to get a good view. Tanja and Wendy decided to try for Golden Triangle. I decided not to, I had experienced it and wanted someone else to experience the fun.

I found a great spot about 8 rows from the catwalk. It wasn’t as fun as yesterday due to being alone. I decided to hook up with some people that seemed fun, I spoke a bit of Spanish and made contact with them. The second show was amazing, even better than first night, which already was outstanding.

Good to see Rocco dancing at both shows as well!

Afterwards I went to the official afterparty and didn’t hit my bed until 5.30 in the morning. Day after I went to the beach and flew back to Amsterdam that is still experiencing Fall instead of Summer in the afternoon.