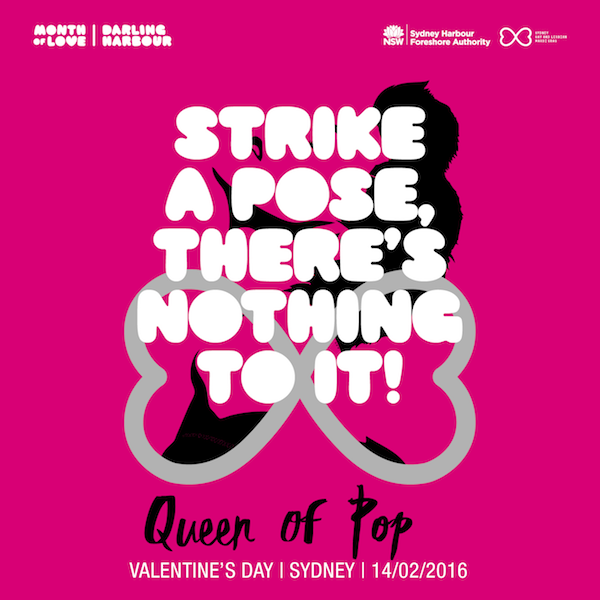 In 2014, we Chered The Love, in 2015 we were Ready 4 Freddie, and now in 2016 it’s time to get Hung Up, Vogue like a superstar (Yes, that’s what you are), Express Yourself Baby! and live the ultimate dream come true, as Mardi Gras and Darling Harbour present the ultimate tribute to the ultimate ICON… Madonna

Queen Of Pop: LIVING FOR LOVE will evoke the magic and positive message of Madonna’s music in a unique larger-than-life Valentine’s Day video tribute to the Queen Of Pop, celebrating Rebel Hearts all over the world.

The video production and Live Performance event will feature a huge cast of dancing performers, fierce fans of ALL ages and lots of surprises that will leave the audience literallyLIVING for LOVE!

The performance and video will be set to an exclusive mix of Madonna songs focusing on her musical journey including Material Girl, Express Yourself, Hung Up, Vogue, Like A Prayer and Living for Love.

As a performer, Madonna’s music and visual image has shaped and defined a generation during an era of huge global and social change, and diversity has ALWAYS been core to her message of self-expression and love.

Sydney Gay & Lesbian Mardi Gras and Sydney Harbour Foreshore Authority have commissioned our creative team for the third year in a row to create this unique tribute, which will include both a show-stopping live event and a video clip, which will be released on the Mardi Gras official Facebook Channel as a message of Love to our Queen Of Pop ahead of her arrival in Australia with the Rebel Heart tour later in March.

We are looking for volunteer dancers who love to Express themselves! We are shooting on Valentine’s Day between mid-day and 5pm.

Let’s make this a huge celebration and send a message of Love from the heart to the Queen of Pop so fabulous that she can’t resist to reply to!

Looking forward to seeing you next month!

From the Megadonna Video Team.

Thanks to: DJ Dan Murphy