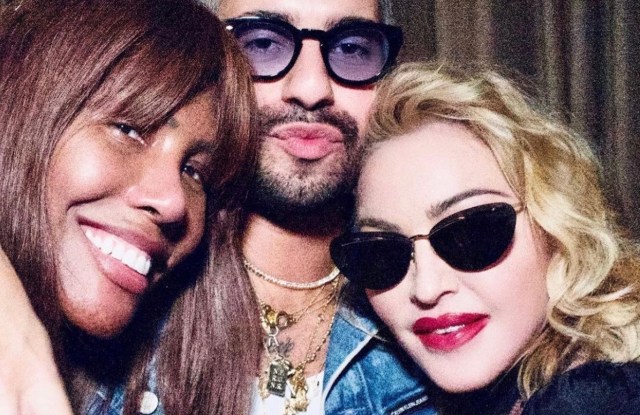 Photographer Ricardo Gomes was on assignment in Lisbon shooting behind-the-scenes when he first met Madonna. She was filming the documentary “The World of Madame X” about her concert tour.

Fast forward two years and Gomes now spends his days following the Grammy winner and her family taking his own documentary footage of them. Madonna gave him the opportunity to get into video after seeing his photography. A self-described “world citizen,” Gomes is based in Los Angeles but frequently travels with Madonna.

Their latest video is a Pride Month-themed one that will debut at 10 p.m. Thursday in Times Square on the NASDAQ screen, and again at midnight. (Stay-at-homers will be able to find the video online, after its release.) The video is called “No fear, Courage, Resist.” Meanwhile, Gomes and Madonna (the guest of honor) are expected to be at The Top of the Standard at The Standard Hotel where guests at a private party will also see the film and installation.

Freedom is the theme of the short film, which will be shown to The Standard’s guests upon arrival in their rooms as part of the welcome TV message. They can also catch clips of it in the hotel’s elevators.

“M has been repeating and reinventing what she has been saying since Day One of her career. We’re working around that [idea] — freedom, expressing yourself, being who you are, believing in what you want to be, trusting yourself, being mindful, powerful and love each other. Those are the most important messages. Love is love and everyone should just accept each other for who they are,” Gomes said. “It’s meant to be a celebratory video. It’s the perfect moment to have this video. We worked on it for Pride for this message.”