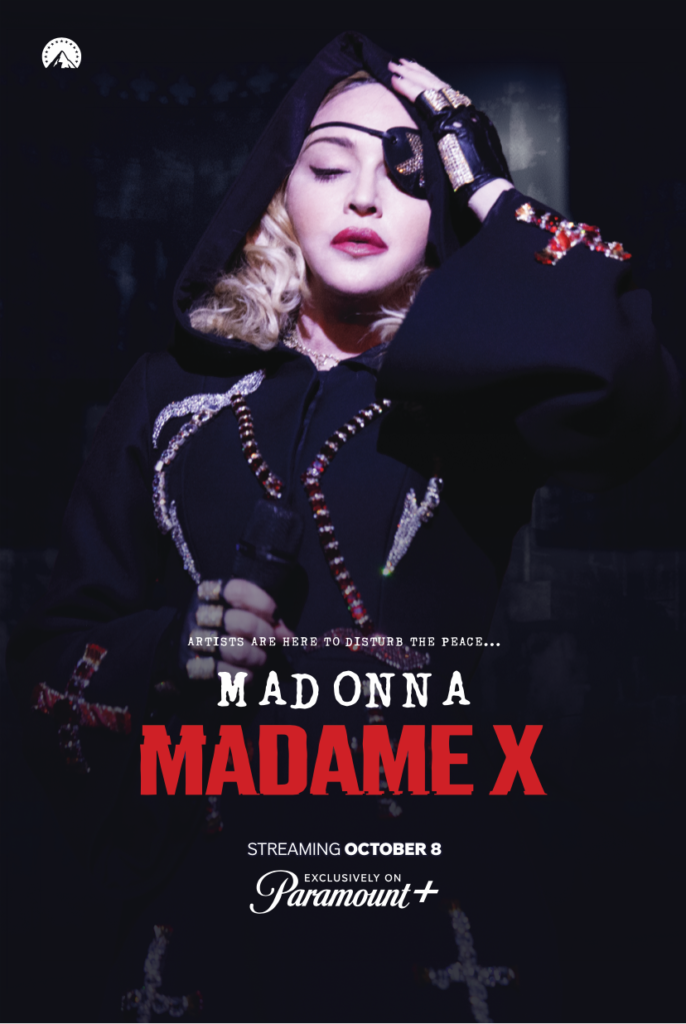 Filmed in Lisbon, Portugal, Madonna’s highly-anticipated documentary film, MADAME X, captures the pop icon’s rare and rapturous tour performance, hailed by sold out theatrical audiences worldwide. The unprecedented intimate streaming experience premiering exclusively on Paramount+ in the U.S., Latin America, Australia, the Nordics and Canada beginning on Friday, October 8, and on MTV outside these markets, will take viewers on a journey as compelling and audacious as Madonna’s fearless persona, Madame X, a secret agent traveling around the world, changing identities, fighting for freedom and bringing light to dark places.

Madonna’s virtuoso performance in MADAME X celebrates the seven-time Grammy Award winner’s 14th studio album of the same name, which debuted at No. 1 on the Billboard 200 chart, and captures new music alongside previous hits and fan favorites for an unrivaled theatrical journey. The linguistically diverse album, inspired by her life immersed in the rich cultural influences of Lisbon, is a love letter to multiculturalism and a testament to Madonna’s transformative influence on, and respect for, global culture. MADAME X features 48 on-stage performers including Madonna’s children, musicians and dancers from around the globe, and the all-female Orquestra Batukadeiras, whose performance of “Batuka” evokes Batuque, a style of music created by the women originating from Cape Verde.

From MTV Entertainment Studios, MADAME X is directed by Ricardo Gomes and SKNX. The Madame X Tour was created and directed by a team led by Madonna, including Jamie King as Creative Producer and Megan Lawson as Co-Director and Lead Choreographer. Additional creative contribution and choreography by Damien Jalet, Costume Design by Eyob Yohannes, Musical Direction by Kevin Antunes and Set Design by Ric Lipson for Stufish Entertainment Architects.