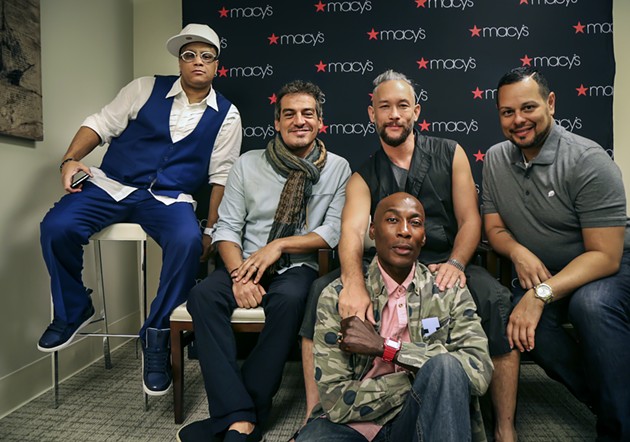 Madonna’s feature-length rockumentary Truth or Dare spotlighted many of the Queen of Pop’s sexy song-and-dance numbers from her 1990 Blond Ambition Tour. But it was what director Alek Keshishian captured offstage that truly curled mainstream America’s toes and almost garnered the film an X rating. For the seven male dancers — six gay and one straight — that made up Madonna’s dance troupe, however, certain truths were still too shocking to reveal.  It took 25 years, but today they’re ready to tell all in a new documentary about the truths behind Truth or Dare, entitled Strike a Pose.

SF Weekly caught up with the band of “brothers,” Luis Camacho, Salim Gauwloos, Kevin Stea, Carlton Wilborn, and Oliver Crumes III, between a Macy’s in-store appearance and their film’s Frameline premiere on June 25, about the secrets that they didn’t dare expose.

There’s a pink elephant in the room that I can no longer ignore. Where is your fellow dancer Jose Gutierez?

Salim Gauwloos: He has some work in New York, so he couldn’t be here.

Switching gears, when Madonna first decided to document her Blond Ambition Tour, did she have a specific purpose in mind outside of just showcasing life on the road? Was she pushing an alternate view of the gay community?

Carlton Wilborn: There was never a conversation with her in regards to the purpose of that particular tour at all. All that we knew was that at some point she wanted to film the life that we were having when we were on the road, and it was just an organic catching of all of who we were and what our experience was.

Kevin Stea: I think she knew very well that she was pulling from the gay nightclub scene in New York and presenting that. Also, her friend world was filled with gay people, and her experience of gay people is that we are normal, friends, human, and the people around you.

It was also a collaborative thing going on with her and Alek Keshishian. Alek is also gay, and I think it was within their conversations. You can see his vision of the movie and his message just as much as hers, so I think he probably influences a lot of that.

One thing that’s certain, according to statements made in Truth or Dare and Strike a Pose, is that the late Gabriel Trupin was Madonna’s favorite dancer. Why?

CW: He was all of our favorites. He was the favorite child.

Oliver, you were not everyone’s favorite off the bat. In Truth or Dare you come off as very homophobic, yet today you embrace the gay community wholeheartedly. What was the turning point for you?

Oliver Crumes III: The day of the Vogue photo shoot. It opened my eyes up. I kind of adjusted, but I didn’t really get to know everybody. We began rehearsing before the “Vogue” video, and it took time. We weren’t close in the beginning, but as the tour went on, I learned everything about everybody.

So was your claim in Truth or Dare that your fellow dancers were all after you true or not?

OC: No. But anyway, I love them. I found out the reason that they are who they are. I found out about their whole lives, and from then on, I went from being ignorant to being mature about it. They turned my life around.

SG: He was also young, and imagine being stuck in a room for one year with six queens.

OC: It was hard, but they made me stronger.

Read the full interview at SFWeekly.com