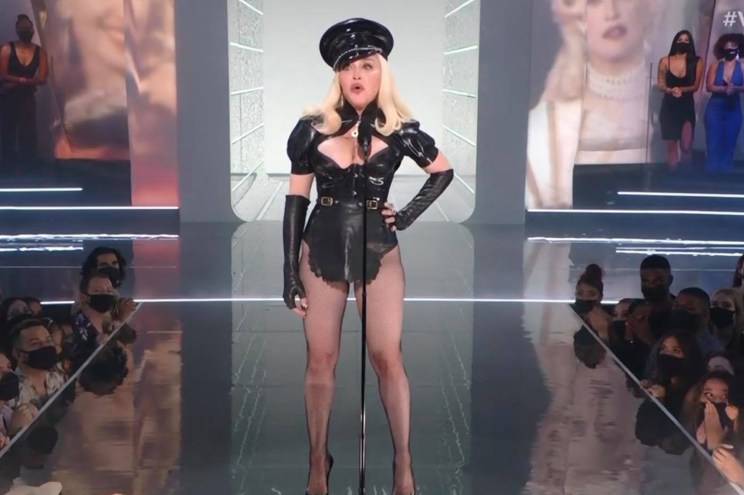 Madonna pretty much put the M into MTV back  when the music television network was just getting started in the ’80s.

So it was only fitting that the Material Girl — now the Material Sexagenarian — would open the 2021 VMAs to help restore order to the awards show, which, in its first attempt to go back to its pre-pandemic glitz, returned to Brooklyn’s Barclays Center on Sunday night.

“And they said we wouldn’t last. But we’re still here motherf–kers,” a dominatrix-styled Madonna said, welcoming everyone to the VMAs in the year of the network’s 40th anniversary before Justin Bieber took the stage for the night’s first performance.

Of course, Madonna has been synonymous with the VMAs since the very beginning. In the inaugural show in 1984, she writhed across the floor in a white wedding dress to “Like a Virgin,” a performance that cemented her superstardom and established the VMAs’ propensity for culture-shaking moments.

Then of course there was her Marie Antoinette moment at the 1990 VMAs, when she turned “Vogue” from a underground house ball into a French Revolution one.

Madonna continued to push the envelope with the VMAs — and its censors — at the 2003 show when she kissed both Britney Spears and Christina Aguilera during a medley of “Hollywood” and “Like a Virgin.”

And then in 2018, it was the Queen of Pop who paid tribute to the Queen of Soul, Aretha Franklin, after she passed just weeks before the VMAs.

And the VMAs could certainly use her to help reestablish the relevancy that they once had when she ruled the show with her every move.