Acurious mix of anticipation and trepidation hangs in the air of the London Palladium as the audience dutifully stash their mobile phones in locked pouches and await the arrival of the biggest-selling female recording artist of all time. The Madame X tour arrives in Britain trailing a different kind of controversy to the one you might expect from Madonna. There have been cancelled shows, talks of health issues, hotly contested reports of slow ticket sales, and stories of audiences booing and even attempting to sue her for turning up on stage hours late. And there are the grumbles about a setlist that’s bullishly heavy on tracks from her most recent album and takes what you would politely describe as an intriguing approach to her back catalogue. She sings the bare minimum of big hits – Vogue, Like a Prayer, Human Nature – with Express Yourself and La Isla Bonita reduced to interstitial roles (the former performed as a sweet, but brief a cappella duet with her daughter Mercy), and American Life performed in full.

Still, it occasionally serves to remind you that some of Madame X is better than its relatively muted commercial response might suggest – Medellín sounds like the hit single it wasn’t, as does the gorgeous album track Crazy. This is presumably part of the point – the other part being a certain screw-you intransigence designed to underline that we are in the presence of an artiste, not a pop star.

Madonna plays up her proximity to the audience: usually seated in a different postal district to the stage, today they are within touching distance. She talks about the venue’s wonderful intimacy – a speech she delivers, oddly, while hidden behind a black wooden screen with only her feet visible, which feels a little like talking about a breathtaking view when you’ve got a paper bag over your head. She gamely interacts with the audience, up to and including stealing first a punter’s seat, then his beer, occasionally scuppered by the fact that the people she interacts with are too overawed by being in her regal presence to make any kind of sense.

Otherwise, the performance doesn’t really do low key: it feels like an arena show crammed into a smaller space, with suitably eye-popping results. There are a series of tableaux that suggest Madonna is an ungovernable force of insurrection, who shadowy forces – soldiers, trench-coated private eyes and indeed actual shadows – are trying to oppress. There is an appearance by Cape Verde’s Orquestra Batukadeiras, whose performance is so gleeful you scarcely notice Madonna herself, respectfully seated at the side of the stage. There is a fake riot, a moment where Madonna unexpectedly starts playing the bongos, a moment where Madonna is bundled across the stage shouting “fuck the patriarchy!” and a flatly brilliant staging of Frozen, accompanied by a sensuously choreographed video that initially appears to feature Madonna, but turns out to be her daughter Lourdes. 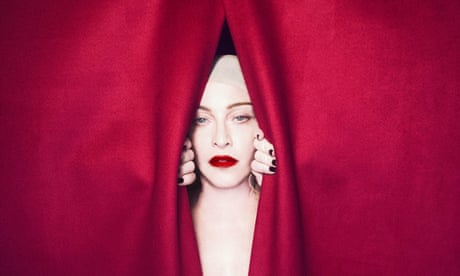 There are also points where the show feels slightly scrappy and disjointed, and points where it sags – you really do get an awful lot of Portuguese fado for your buck – but it’s hard to feel short-changed. There’s such a lot going on over the course of two hours and it’s hard to imagine another star of her stature even thinking about trying anything as clearly experimental as this. The gammy hip that’s dominated headlines in recent weeks doesn’t seem to have much impact on her dancing, and she’s genuinely funny about both the price of tickets for the show and the bizarre moment in the early 00s when, living in Britain, she suddenly developed an English accent: “Why did you let me do that? I’m from Michigan.” Whether it’s really giving you a more intimate glimpse of Madonna is a moot point – physically closer to her fans or not, it’s still a show, not an evening of unvarnished soul-bearing. But the racket they make when she finally leaves the stage suggests that, quite understandably, none of them care.

More at The Guardian