Madonna played an impromptu concert on Wednesday night at the Place de la République, Paris, where people have paid tribute to the victims of November 13’s terrorist attacks.

The pop-star sang with her 10-year-old son, David, and her guitarist Monte Pittman, having headed to the crowded square from her sold-out gig at the nearby AccorHotels Arena.

During the first show, Madonna had sung the French national anthem La Marseillaise while wrapped in the country’s flag. After the concert, she tweeted to tell her fans about her plan to perform in the square. 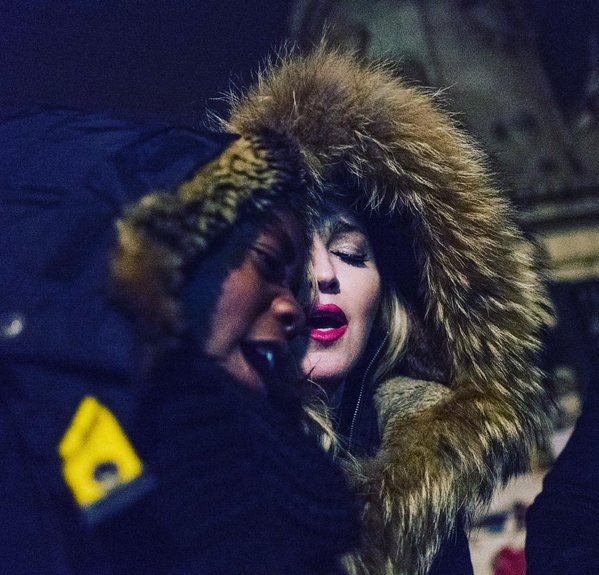 In the arena, she said: “We will not bend down to fear! I think of what happened almost four weeks ago now. The heart of Paris and the heart of France beats in the heart of each city. I came here when I was 20 and it was here, in Paris, that I decided to make music. Thank you Paris for planting that seed in my heart!”

The singer is one of a few major pop artists to have played in Paris since the attacks, in which 130 people died. U2 were joined by Patti Smith & Eagles of Death Metal during their rescheduled shows at the AccorHotels Arena earlier this week. Last month, U2, Foo Fighters and Motorhead all cancelled or postponed concerts in the city.

Upon hearing about the attacks in November, Madonna interrupted her concert in Stockholm “to acknowledge the tragedy… and the senseless endings of precious life.”

Madonna told Wednesday’s crowd at the Place de la République: “Everybody knows why we’re here … we just want to sing a few songs about peace, just to spread love and joy, and to pay our honour and respect to the people who died almost four weeks ago. And to spread light … we all need it.”

After playing her single Ghosttown, from her 2015 album Rebel Heart, the singer played a cover of John Lennon’s Imagine and her 1989 hit Like a Prayer. Her guitarist told the AFP news agency that Madonna “wanted to pay tribute” to Paris. “She loves this city,” he said.