Madonna performs at Children in Need 15 years ago today – a personal live report! 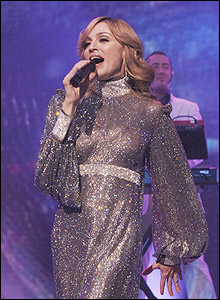 Out of all the Confessions on a Dance Floor promo performances, I think I was most lucky to be able to attend the ‘Children in Need’ taping on November 18 2005.

This was the one event where tickets were not available to reserve, order or queue for. All we knew was that Madonna would be there to perform for the charity event at the BBC studio’s in London.

We decided to give it our best shot, take the tube and see where we would end up. When we arrived at the studio’s we walked up to the information desk where people were handed their tickets. We simply asked if there were any tickets left, not thinking anything of it and mostly without having any faith. I remember the girl leaning to check under her desk, grabbing a folder and saying ‘yes, I have two spare tickets left’. Wait?! That was it? We didn’t even need to try and convince her why we needed to be at the taping? I was screaming with joy inside but held it together. We were given our tickets and told where to go and wait.

We ran into Madonna’s tour manager outside whom we greeted. There was nothing but kids there with their moms, so we got some strange looks. We weren’t wearing Madonna shirts or anything, but we were basically the only kid-less couple there. A little while later we were escorted to some sort of lobby to sit out the rest of the wait until it was time to enter the studio. Once there we were escorted to our seats. I am always shocked to see how small most studio’s are, and this was no exception. We were seated in the fourth row from the stage right beneath one of the camera’s, great center spot! We knew it was going to be a very long event so we asked one of the camera crew members whether they knew when Madonna would appear. He checked his schedule and told us Madonna was actually the very first artist to perform as she had requested so. We were told that Madonna agreed to perform two songs, but only wanted to stay for a maximum of 20 minutes and then leave right after. Yes, sounded like Madonna to me.

Once taping for the show got on the way, after only a very short intro we recognized Madonna’s band walking onto the tiny stage. Suddenly without any form of introduction, or roar from the audience…Madonna walks on stage. This teeny tiny little woman dressed in a super sparkly 70’s disco inspired little number, looking down at the ground, shoulders held up high. Dare I say it? She seemed genuinly nervous. It was quite the moment. Many kids had no idea who they were staring it, but the moms were all giddy with excitement. I remember constantly getting various kids’ artworks in my face, which they were waving around like they were giving away free money. I felt like I was sitting in a circus, waiting for Pippi Longstocking to show us how incredibly strong she was. We felt so out of place….. 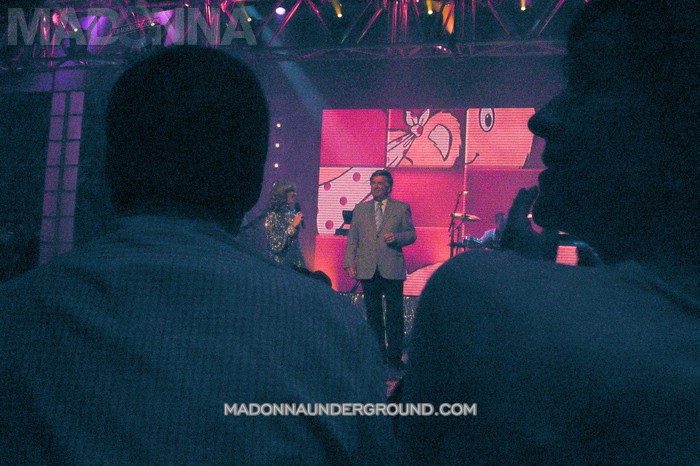 Suddenly the intro to ‘Get Together’ filled the studio and Madonna changed immediately. She looked up and out into the audience, started to smile and got into her groove. It was a very different audience from the one at KOKO a few days prior, so no sexy moves Madge! We all got up and danced, sang and clapped along. It was obvious that nobody was familiar with ‘Get Together’ but they seemed to like the tune anyway. Madonna pointed to us a few times when she sang the line ‘come on over here….’ and we were like oh yes please. After the song Madonna left the stage for just a minute while they shot something else on stage, and then Madonna came back. ‘Time goes by so slowly’.…she was going to perform ‘Hung Up’ right this minute. And THIS the children knew, so they all danced and jumped and got all excited. Madonna seemed to love the feedback and kept singing to the children in the first couple of rows.

When the song finished she had to tape a short talk with the host before having to read a phone number out loud people could use to donate money. The screen with the phone number was right above our heads (yes it was that camera) so we had to duck a little bit so she had a clear view. She had some trouble reading it and we pointed to it. She got it right in the end and then quietly left the stage. Quiet entrance, huge big party, modest exit. This wasn’t Madonna’s usual audience and it showed, but it was a lot of fun to have been part of it. After Madonna I remember that Liberty X came out to perform (I honestly don’t remember who they were) only to be followed by Kelly and Sharon Osbourne having a chat on stage. We felt it was time to ask the crew if we could leave the studio’s early, as we knew it was going to be a couple of hours. Fortunately for us that was no problem and so we were off. We later learned that for the broadcast they changed up Madonna’s performances in order of appearance.

We tried to take pictures from the audience with our incredible disposable camera (remember people, these were the Middle Ages) but as we did so secretly and without using flash, they turned out absolutely horrible. Yes not even Photoshop can save them, but you know here they are and just know that the glittery thing is Madonna. 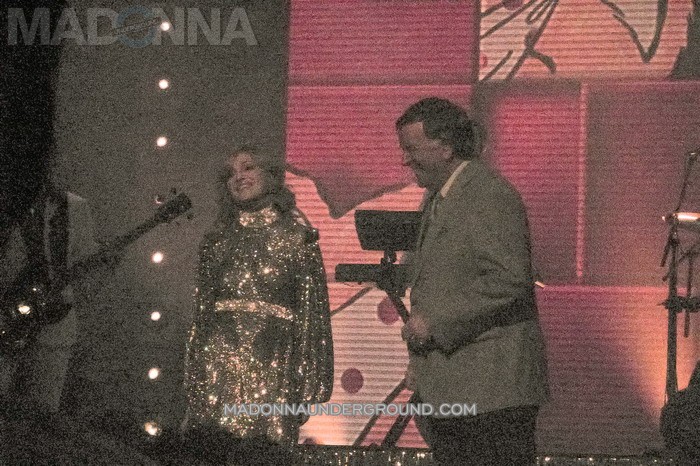