I didn’t want to break my tradition of seeing Madonna live every year since 2001, so I really wanted to attend Live Earth. From the very beginning it was known that Madonna would be there to perform, but here we go again….how will we get tickets? Thank God a good friend of mine in the UK gave me a good tip and after a few minutes I had bought three standing tickets through Ticketmaster. With some trouble we managed to book a hotel in a walking distance of only 10 minutes from Wembley Stadium, and our train trip was booked too.

Our traintrip ran smoothly and nice and early Simon and me arrived in London. Decided to drop our luggage at Waterloo Station and then go to Oxford Circus to shop. By bus we went there and enjoyed the shops and food. At the record shops behind Oxford Street I managed to buy some Madonna promo albums for just a few quid, so my shopping was a success already.

But then the problems started when we wanted to return to Waterloo Station. We only wanted to take the bus as taking the subway bores us to death, but nowhere could we find a busstop that would take us back to Waterloo. After searching for about 30 minutes we grew a bit desperate and decided on a taxi instead. Unfortunately it was rush hour and our driver was in such a good mood that he managed to nearly run two people over (gotta love those drivers!) At Waterloo we picked up our luggage and took a taxi to Wembley (yeah I know, very expensive idea).

When we finally got to our hotel, we were a bit surprised about it actually. The hotel was in the middle of nowhere, a true ghetto. The hotel owned a few properties next to the hotel and one of them was our ‘hotel room’. But this house wasn’t protected by anybody and since this wasn’t the best of neighbourhoods we didn’t feel safe. We decided to order some pizza as we didn’t want to go out for some, after the pizza we fell asleep almost instantly. Hans would be arriving later that day because he was travelling by airplane. He told us that he had a two hour delay. Eventually after midnight he finally arrived, he had to travel by bus as the tube had shut down. His adventure hadn’t started too good as wel.

All three of us got up early, had breakfast and then directly went to Wembley Stadium. It was indeed only a ten minute walk to Wembley Stadium (amazing weather). When we got there we saw nothing but Madonna fans, lots of familiar faces, lots of 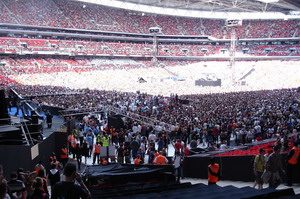 The picking up of our tickets was a piece of cake, I showed them my e-mail confirmations and ID and was given the three tickets. After this we decided to hang around a bit and explore the territory. At the merchandise stand we bought the Live Earth book even though they weren’t officially open yet. We decided to first bring back the book to our hotel to prevent it from being crushed or damaged during the show. Going back to the hotel wasn’t a wise thing to do and I’ll tell you later why.

On our way back to Wembley Stadium we bought a bagel and took it all very slow, we had made the plan of making this a stress free day and wanted nothing but fun. We were informed that apparently there wasn’t a golden circle inside so we didn’t even bother entering the queue early. So then we entered the long queue at entrance B and the long waiting started. When we finally got into Wembley Stadium, we couldn’t believe what our eyes were seeing…..there WAS a golden circle and they were still letting people in! So we tried our best to get there with all our might but you know what happened? Right, they closed the gates right in front of us! We tried everything to be allowed in but no one would listen or even try something for us (there was enough space in the golden circle). This was such a let down, but we reminded ourselves that we had chosen to have a stress free day.

We found a perfect spot at the front of the gates separating the golden circle from the field and chose to stay here. From the very beginning until Snow Patrol we were at this spot. Genesis was OK, Razorlight couldn’t bother us and neither could Snow Patrol. As our feet were already bothering us, we decided to give up our space at the front and to walk around the rest of the day. It had gotten so crowded that walking around the field was almost impossible. We only went to watch the performers when there were people performing we really wanted to see. So we saw Duran Duran and the Red Hot Chili Peppers.

A definite highlight for me was Metallica, we heard their rough sound while walking around and immediately made our way to the field. I found a perfect spot on the left side of the stage. Hardrock isn’t really my thing but what Metallica performed right then and there was absolutely amazing. James Hetfield’s voice, the music and the genuine melody in the music (something that was clearly missing from the music of the Foo Fighters) and the emotion that they brought out of people….absolutely breathtaking! I too went absolutely nuts and I thought that ‘Nothing Else Matters’ was brilliant. After Metallica I was like, wow boy am I glad I got to see this live. We then also saw the Beastie Boys and then got to walking around again.

When we got to the right side of the stage the Pussycat Dolls were introduced and since I’m a fan I immediately made my way to the field. I thought that they were amazing, live even better than on record. By now I had found a perfect spot on the side of the stage and my view was directly on the stage as well. After the Pussycat Dolls I decided to remain at this spot because I knew that after the Foo Fighters the one and only Madonna would finally perform! I thought that the Foo Fighters were an absolute waste of time, such noise, what terrible terrible terrible music!

Right before Madonna was about to come on, the security suddenly put a gate in front of us obstructing our view, so you understand that all of the people around me went absolutely ballistic. People started shouting and screaming that they had waited all day for Madonna and how dare they put a gate in front of our faces! Of course I too was outraged, after a lot of screaming from both parties the 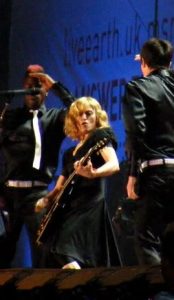 security decided to remove the gates in front of us and also remove the gate that was obstructing our view. The people who had just stood in front of me left, so immediately I was in front and my spot had moved since they removed the gates that I was standing in between security in the backstage area…..it was all fine by me!

And here she was………Madonna! She looked stunning, all in black with her blond hair (well didn’t expect differently to be honest). She started with ‘Hey You’ which live sounded brilliant together with the children’s choir. Where I was I was the only singing along to ‘Hey You’ and the security seemed to find that very interesting. ‘Ray Of Light’ as expected was the Confessions Tour version, as my muscles were all very very painful I really couldn’t jump when Madonna commanded us to. But as usual I performed my trick by bending my knees so it looked like I was jumping (LOL). At the end of the song she came right over to our side with her guitar, so I went crazy waving and yes jumping!

The new version of ‘La Isla Bonita’ with Gogol Bordello was the hightlight of the day for me, what an amazing version! Everybody around me was dancing, everyone was having fun. ‘Hung Up’ was the Confessions Tour version and was the perfect way to close Live Earth for me, I danced and then…it was finished. After Madonna left the stage it seemed all of Wembley emptied immediately. Hans’ pictures came out great and Simon had decided to film it all instead of taking pictures. When we got back to our hotel we looked at the pics and footage and then absolutely exhausted went to sleep.

At 7am I stood next to my bed, my body aching all over from yesterday. We were going to take the taxi directly to Waterloo (this because of the expected busy traffic due to the Tour de France). For 30 quid we were dropped right in front of Waterloo Station and then bought some bagels as breakfast. At WH Smith I found the articles in the newspapers on Live Earth very disappointing, with Live 8 things were very different. I bought four newspapers and then Simon, Hans and I bore ourselves to death.

As I had slept so litte in the past few days, it was starting to take it’s toll on me and I was just done with it. We said goodbye to Hans as he was taking the plane back to Amsterdam. After checking in at the Eurostar and getting on board travelling first class, we found out we were delayed 45 minutes which caused us to miss our connection train in Brussels. It seemed like nothing could go right this weekend! After waiting for another 45 minutes we finally got on a train to Amsterdam.

Arriving at home we watched all that we had taped of Live Earth from Dutch TV. And of course you can guess what happens next…..because Dutch TV decided to broadcast Madonna’s performance hours later than she originally had performed, we had taped everything but Madonna! OK our disaster weekend was complete. But then again I can take a whole different look on the weekend and say, I was present at Live Earth and saw some amazing bands (Metallica) perform. I saw Madonna from a backstage view, and that is what you’re doing it for. When you see Madonna, you forget all the bad things that have happened to you, because this is eventually what you’re taking the trouble for, and if you want it, go for it.

Yeah Madonna, of course we’ll be present next time without a doubt!