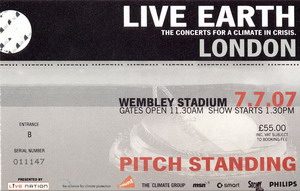 After a very busy 2006 (with 12 shows seeing Madonna live on stage) I thought that 2007 was a very relaxing year and not expecting to see Madonna live before somewhere in November when she will probably release her new album. But she was headlining for the upcoming Live Earth concert in London on 07-07-07 in the new ‘Wembley Stadium’. After reading this several times and putting the news on the site, we had to wait days before we could register us for this event, with this you had the chance of buying tickets. Unfortunately we didn’t got any reaction on it but gladly Kimmy got her ways to get three tickets for Live Earth, so it was a fact that we would be attending!!

After a really strange day in my store I went to Schiphol Airport around 4pm. The weather wasn’t great, lots of wind and lots of rain from time to time. After the check in, I went through customs and now I must WAIT till 8.20pm. Unfortunately I heard very soon there was a delay of 40 minutes (well not a big deal yet) But another delay came around 10pm, when the plane should’ve been there. Then 20 minutes later there was another 35 minutes delay. Tried not to panic but got the feeling that I wasn’t allowed to go to London! Gladly at 10.15pm we got onto the plane and left Schiphol around 11pm.

The flight was very short (40 minutes) and when I got to Heathrow I had to take the tube to go to Wembley Central. Unfortunately the Tube stopped when I got to Paddington station! no tubes for today..so I had to search for a bus or taxi. I ended up with the bus and I got to Wembley at 1.15am. There Simon picked me up and we walked to the hotel (well it was more a house we rented for two days) After some talking we went to bed because we had to get up early to pick up the tickets and see how crowded it was. 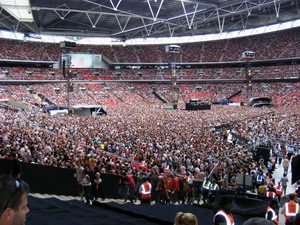 After a small breakfast we walked to Wembley Stadium around 8.30am, the weather is sunny and the mood very good. After 9.00 we got the tickets and started walking to entrance B were we must queue to get in. It wasn’t busy at all when we got there, as we heard from a security man (he was busy with blue wristbands) there was no Golden Circle and these wristbands were only for people so that they are not standing in the wrong queue!

We went back to the hotel to bring back the Live Earth books we bought earlier. On our way we saw Tony and he said there IS a Golden Circle, but we were too relaxed to get nervous.

Back at Entrance B we had to wait (after collecting our wristband) and the waiting was long till 12.15 when the doors were open, now may go in, when we walked on the field. I see that there are people let in the Golden Circle So we walked faster to reach the golden circle. BUT when we arrived (yes this is your worst nightmare) the lady told us.. “SORRY GOLDEN CIRCLE IS FULL”. You must be kidding me?, but unfortunately it was full and no one got in anymore, so we found a spot at the right side of the stage the view is good! 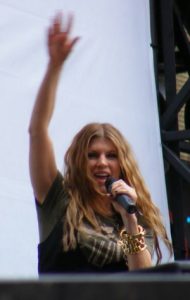 When the Live Earth show starts around 1.30pm (and the stadium is not full) there was a first act, a drum band, this was being followed by Genesis. I notice that we were too close to the speakers and the music is so loud that I’m afraid that if I stand here for another 16 hours, I will end up deaf. Razorlight and Snow Patrol, these bands are not my thing at all and we decided to walk around the stadium. After eating and drinking something we got back when ‘The Black Eyed Peas’ started to play.

I’m really impressed about their performance, have to say this is perfect and yes they prove to me that you can only judge a band when you have experienced them live. Duran Duran, this is going back to my youth and they prove again that they still have it. Wembley also enjoyed this and they are going wild for Duran Duran. After some other artists (from other countries where Live Earth is also being organized like Australia where Crowded House is playing) the first band I wasn’t looking forward to started playing. “OH PLEASE THIS IS HORRIBLE” The Red Hot Chilli Peppers. But I’m watching their performance and after this I must say it wasn’t bad, but that’s all. I also expected not to like Metallica but they really surprised me with their songs, I will not buy a cd of them right away (LOL) but they were really amazing.

The Beastie Boys? funny part is that they are on the same stage as Madonna (they were support act during the Virgin tour) they are still rocking only, they’re only older and have more grey hair but the music is still untouchable! Really great to see them. The day passes by quickly with all the artists and when it becomes darker it is time for THE PUSSYCAT DOLLS. Also these ladies know how to surprise me and it time to sing with them! Kimmy told me that after the Foo Fighters (WHO?) Madonna will enter the stage! Okay about the Foo Fighters there is just one thing I had to say about them “TERRIBLE NOISE THEY MAKE”, I think that the singer must have a sour throat after his show, this cannot be good for your voice. This is my opinion and it is for sure that 69.997 people must’ve thought differently as Wembley went nuts when they played. After some short films and two more speeches where also all the light went off in Wembley Stadium, you could see on the screens how beautiful that was (when a helicopter was flying over the stadium). There was Chris Lamb (Mr Cowboy Hat) he was checking the stage and the children choir were also on stage it is now 9.50pm and it is time for M A D O N N A!

This is were we were waiting for the whole day, she started with ‘Hey You’ I sing along. When the children choir went off stage, Madonna thanked Al Gore for his work against climate changes and said let’s start a Revolution! Ray Of Light is the next song and she wants that everyone in the stadium will jump, this is such a great view when you see 70.000 people jumping. Okay I have to admit that I wasn’t jumping throughout the whole song, after being on my feet for at least 14 hours and yes I’m not 18 anymore. Madonna walked to our side and when the song is over she introduces Gogol Bordello and she sing La isla Bonita. First the version we all know of the Confessions tour but very fast with some Russian influence this is really AWESOME! This is the Madonna I know she is still changing things in her performances!

TIME GOES BY SO SLOWLY!! (too fast Madonna) because Hung Up is the last song that she will sing, this is one of the songs to get Wembley stadium going! When Madonna is off stage Live Earth London is over. We are going back to the hotel and in less then 20 minutes we are falling on our beds and fell asleep. 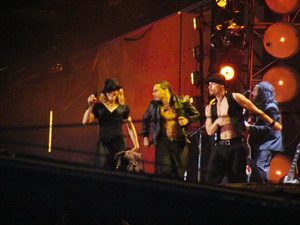 Got up early because in London this weekend is also the start of the ‘Tour De France’. And they advised us to leave early before you got stuck in traffic when so many people will be going to this event. We checked out and went to Waterloo station around 9.30am where Kimmy and Simon will be leaving with the Eurostar to Holland. My plane departs at 3pm, so I can take things very slowly.

After eating a wonderful bagel (1? okay sorry 3) I say good-bye to Kimmy and Simon, and took the tube to Leicester Square and have some time left to enjoy the sun (this is really relaxing). Then it is also time for me to leave. At noon I arrive at Heathrow and when I checked in I had to wait for the security check and it took more than 30 minutes before I was through this point (shoes out, no belt, bag open) you know for your own safety! Then I had to wait again for the plane so I searched for all the newspapers and bought some cd’s! Got a text message from Kimmy that she has a 30 minute delay, got my fingers crossed that I won’t be experiencing any delays this time.

No everything went fine and arrived at Schiphol 15 minutes earlier than scheduled. Back at Schiphol and through customs I saw Peter. The Weekend was over, Live Earth for me was fun, exhausting and surprising! I have the feeling that I will see Madonna again this year ;-)