Paris, city of fashion, museums, romance (???) and….Madonna: the early morning of May 6, I decide to turn over once more. My blanket is warm, but I feel the morning breeze, hear the First whispers on the street, smell Fresh breakfast. I open my eyes and a nice hot sandwich is given to me. If you hear it like this it may sounds lovely, but actually it should be: it is 5.30 in the morning, I wake up aching. My sleeping bag smells and the people arrive to clean the streets, lots of people around me, I smell squashed potato chips and old cookies. I open my eyes and a fast-food cheeseburger is being handed over to me.
Yes, I am on the streets once again in front of a theater. What a sight, I really think I am getting too old for this. But, it is all about the reward, later I will be eye to eye with….Madonna, at least I hope.

One day prior I arrived with my www.madonnaunderground.com buddies Hans and Kimmy with the Thalys in the French city. Madonna is performing three shows to promote her album Hard Candy: one in New York, one in Paris and one near London. The 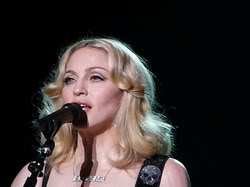 First two gigs are in theaters, the British performance is on a (sold out) festival. The theater gigs are very exclusive, because usually Madonna performs gigs for 70-75.000 people and in the theater there’s only room for around 1500 attendees. This is a unique opportunity to see the Queen of Pop up close, with a performance she will only deliver in three cities in the World. Tickets aren’t for sale, but by invitation or winning them in competitions only. As we are not on Madonna’s VIP guest list, or as usual didn’t win anything in the many competitions (so what else is new), we decide to go for it and travel to Paris anyway. Still, it is not entirely a gamble, because 500 tickets were handed out for free at the previous gig in New York. If we arrive one day prior to the show in Paris, there’s already a queue of fans. They’re from all over the World: England, Germany, Italy and even Australia. Even though it’s still 30+ hours till the gig the following day, there’s only one thing for us to do and that is to join the queue. We buy some chairs and our long wait begins. In the queue we meet up with fans we met at previous shows. We saw each other for the last time during Confessions Tour in 2006, but many contacts go as back as 2001. A Madonna performance is always a reunion. There’s a lot of chit chat, hugs, food, drinks, singing, dancing, laughing and sometimes the odd glance in once’s direction. The vibe is a mix of joy and anxiety: our idol is bringing us together, but we all want to be at the very front of the stage later. It’s in the genes of every Madonna fan.

The night falls, things are getting quieter. Some snoring here and there. Being awoken once again by trucks driving by (there are always many trucks at a Madonna performance). Eventually I fall asleep and am happy to see daylight when I wake. More hours gone. Meanwhile we’re keeping a close eye on the cafe opposite of the street as everyone badly needs to use the loo. The boss of the cafe doesn’t know what he’s in for, because we also all need something to drink, preferably something warm. When I cross the street I see that the queue has grown quite a bit. The rumor that Madonna is performing in Paris has spread fast. I drink a cup of hot chocolate and bring something with me for Kimmy and Hans, who got me a cheeseburger. The First camera crews arrive. A Phone is being given to me for an interview with a large French radio station. I don’t think the people listening understand a word I am saying because First, I hardly speak French and secondly, I just woke up. But it all doesn’t seem to matter, it’s about being here. Everyone is cheerful, because we have just learned from a spokesperson of Madonna that the First 500 people will be given a ticket.

Around noon we finally receive our ticket and wristband, this is what it must feel like when you win the lottery! We line up in the queue again, because leaving means you lose your spot in the queue. We take turns to go up to the hotel to wash up. 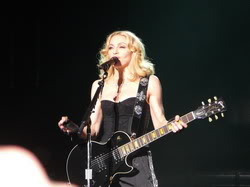 Things quickly turn sour in the queue. It looks like the whole World wants to attend, but no more than 1500 people can enter. What starts with a bit of coke throwing, ends in a fight. Hans and Kimmy leave the queue. Stubborn as I am I remain at my spot. Even though I know I am guaranteed of entrance to the gig, I don’t have the guts to leave the queue. Now that I have come this far I don’t want to give up my spot.

The last hours being stuck in the queue are the worst. Around 8pm the worst part of the evening comes at the doors open. Now it is a matter of not thinking and just doing. The search by the guards seems to last forever. Just when I have chosen a nice fella to search me I am being escorted to the women searchers. I only have my labello and camera in hand, but of course the ladies in front of me have brought the entire pharmacy store. Grrrrr! Once inside I find a spot in the third row (the competition winners were let in earlier). I am satisfied. Thankfully I can deal with the heat, because the temperature soon rises in the tiny theater. The first people fainting are removed. As usual Madonna makes us wait. Tick-tock-tick-tock. At 9.30pm something seems to be happening, after the DJ has been booed off stage. But then another DJ arrives. We want M A D O N N A! Madame doesn’t come on until 10.30pm. But how! All misery disappears!

‘Candy Shop’ opens the show. Madonna is definitely having a good time on her golden throne in the spotlight ‘See which flavor you like, and I’ll have it for you’. With two dancers a great act follows. The theater floor is an explosion of dance. Madonna knows how to win an audience. She looks stunning. No one is standing still now. With the gorgeous ‘Miles Away’ she brings us at ease. It is an impressive ballad, with her 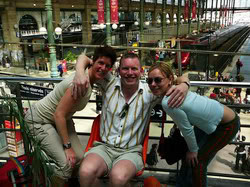 marriage as an inspiration ‘Uncomfortable silence can be so loud’. The guy next to me starts to cry. Madonna touches your heart. Soon she brings us back to the dance Floor with ‘4 Minutes’. Justin Timberlake appears on moving screens: ‘If you want it, you’ve already got it’. It is very nicely done and very refreshing. A performance by Madonna is always a stunning show with the best dancers, the best musicians and the newest high tech effects. Much more a musical than a concert. Even though it is ‘only’ a promo show of six songs! Next she strums her guitar for a rock version of Hung Up. I am a bit done with the song, but live it’s a great experience. Then my fave of the new album comes on ‘Give it 2 Me’. The beat, the Music, the lyrics. Madonna on her best ‘Give me a record and I’ll break it’. The choreography is amazing and Madonna knows how to keep up with her 25 years younger dancers. The last song is Music. Makes the people come together. The road to the show is always a tough one, but once in front of the stage the fans always are one giant family. Man, woman, black, white, gay, straight etc. from all over the World. We are all here for her and whether we want to or not, that is what bonds us. And soon when Sticky & Sweet hits us, we will all be in the queue once more.

(c) Pictures and story by Caroline