When you compare the Hard Candy promo tour to the Confessions On A Dance Floor promo tour, there was very little chance to see Madonna this time. With COADF Madonna was a guest everywhere, with Hard Candy there were only 3 promo gigs scheduled  (Roseland, Olympia, Maidstone). With the COADF promo tour I attended Wetten Dass, album launch at KOKO, Children In Need, G-A-Y and the IGTTYAS premiere in London. This time I had very little options.

Roseland was a definite NO, I will not fly all the way to NY for a show (OK, I do not have the guts), Paris would be for competition winners only and for Kent you’d had to win the ballot and live in the area. Swell. I never entered so many competitions before as I did this time to win tix for the gig at Olympia. I bought an extra Hard Candy cd at bol.com, entered the RTL competition, NRJ competition, sent a fan competition and screwed up a whole weekend to phone in at Radio 538 to try and win tix, a completely waste of my time. As with every other competition Madonna related, the competition luck seemed to pass me by again.

Hans and I were like, let’s just go there and we’ll see what happens, Caroline too decided to take the risk. Thalys and hotel were booked rapidly and this is when we started to discuss our many ticket getting theories. More and more sources confirmed that NO tix were given away at the door at Olympia, so this was quite a stressful time for us.

After taking a pill to calm myself down (I was all nerves), Hans and me jumped on the Thalys to Paris, Caroline got on in The Hague. We spent our trip thinking up more getting tix theories, what will we try to get them? I will not reveal them, but the most idiotic theories passed our minds. Caroline and Hans became more nervous each minute while I was soooo relaxed thanks to the pill I took. Our trip went perfectly fine and upon arrival at Gare du Nord we took the subway to our hotel. Hotel was fine, large room with 3 beds and a very large bathroom with bath and separate shower. When disposed of all our mess, we headed to Olympia. 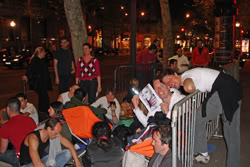 Upon arriving my first theory was confirmed, there was a queue! This could only mean 1 thing: there are tix to be given away! When we asked about this at Dave who was at the front of the queue, he confirmed it. A total of 500 tix were given away the next morning at 10am. It was now around 6pm and so we decided to join the queue as we were too afraid to miss out. There were a lot of familiar faces in the queue and so we had a good time, the weather was lovely. Hans brought some stools so we didn’t have to sit on the floor. A few hours later Hans and me went on a search for a good restaurant to get something to eat. We finally found an Italian where we could eat some good vegetarian pasta. Later I went to the hotel with Caroline to dump a few things and get new ones.

The long wait in the queue had begun, we had given a black marker to Sarah of Absolutemadonna.com so she could number every individual entering the queue, I was number 33. That same evening there was another performance by a man whose name I have forgotten, we were sooooo interesting to all the people walking by. I do not blame them, a bunch of crazy Madonna fans camping out on the streets only to see Madonna the very next day. The hours went by and the weather still was lovely. Around 1.15am me and Hans went to our hotel to try and get some sleep. We were told a bit earlier that maybe not all 500 tix would be given away to our queue.

The walk to our hotel was very unpleasant. Paris in the middle of the night is quite a difference from during the day. The streets we crossed were very dark as there were no lights, every other metre there were people sleeping on porches, believe me it wasn’t good. In the hotel we dropped on our beds with shoes and all and fell asleep. I woke at 4am and woke Hans. While we walked back to our queue suddenly a guy came speeding our way while he was growling (!!) and screaming. We were like let’s not pay attention and walk on, thankfully he ran past us. It was scary. We found Caroline asleep in the queue. 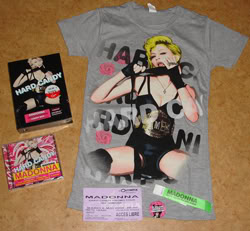 The following hours we spent on our bought chairs and around 6.30am went to get some breakfast at ‘Quick’ (and of course empty the blatter). The queue was now much longer than the night before, but everything still went smoothly. As time passed on, more and more TV and radio crews came up to interview everyone in the queue. Caroline was interviewed live on NRJ radio and mentioned she came from ‘The Holland’ a funny combination of ‘The Netherlands’ and ‘Holland’. TV screws wanted to know everything about us, our MU card has been handed out to a lot of people, our tattoos been photographed a lot. Now the letters on the Olympia sign were changed to ‘Madonna Hard Candy’. Mark, an Iconer who had won tix, was so sweet to bring us some croissants to eat as well.

We didn’t want to leave the queue anymore as we didn’t want to miss out on the handing out of the wristbands and tickets at 10am. I had become very grumpy as I really really needed to use the bathroom, but looking back I easily could’ve stepped out of the queue. The tix weren’t given away at 10am but over an hour later. When I finally had gathered my ticket I had only one thought ‘toilet, I need to use the toilet’. A TV crew were filming the enthuastic reactions of Hans and Caroline, so tried everything to not get into their view. Hans and I went to our hotel immediately and Caroline made sure we kept our spot in the queue. At the hotel I needed three toilet visits to empty my tortured blatter. We changed into some clean (and not dirty from the streets) clothes, then went back to the queue in the heat. Caroline then went to the hotel. In the meantime we witnessed a fight in the queue between a French man and French woman. He was arguing with her as she had come much later then us but was sitting where we were sat, when she starting calling him ‘du canard’ he jumped up, emptied his cola can on her and wanted to grab her. Police however came in between.

The very well known French ‘rush’ was present every so often, but time after time we calmed people down. In the afternoon we got some pizza at Pizza Hut and found out we could not enter our queue again as the definite rush had arrived and everyone was stuck together. I walked around and met up with Tony from the UK, Glen, Mark, Evy and more familiar faces, even Warner Music NL was present! As I absolutely hated the queue 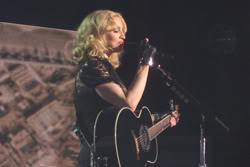 After 8pm the queue finally started moving and we were let in, inside I immediately bought a shirt at the merchandise booth as it was now quiet. In the Olympia (which was much smaller than expected) we found a great spot on the left side on the third row. A DJ was playing and it wasn’t bad. We saw Guy Oseary and Laurent (M’s driver), had seen the dancers outside. My feet at this point were refusing to stand any longer. I had been wearing my sneakers since early the day before so my feet were busted. The waiting and waiting continued, so decided to sit on the floor. Attention directly! Lady of security came up to me to ask if I was OK, other people asked this too, they all thought I was about to faint. Those two annoying things at the end of my legs with ten toes in total, were the only things that were bothering me though!

Miss Madonna chose to really test us as she entered the stage not at the promised 9.30pm but over an hour later! Everyone was fed up with the waiting and were damn relieved that she finally hit the stage. Madonna kicked of with ‘candy shop’ and as expected it was the same as performed in Roseland NY. Madonna looked stunning, definitely a ‘little’ older but not when it came to her dancing, wow! Candy Shop 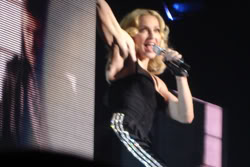 was done very well, her voice was great and she was close a lot of times. Miles Away turned out to be a great sing a long song. M’s speeches were mostly the same as in Roseland, but here she thanked her French fans and French label, she probably forgot the fact that half of the crowd came from elsewhere (I don’t blame her though). 4 Minutes was spectacular and everyone went crazy, too bad Justin wasn’t around but it was a known fact that he wouldn’t be. I hated the rock version of Hung Up when I saw the Roseland performance but here I liked it better. As I was standing next to the speaker, every time the bass hit, it blew my hair the other way. Give It 2 Me was the hit of the evening, great jump song and Madonna seemed to be really into it. She shook a lot of hands in the crowd. ‘Music’ was awesome, first I was like ‘not again!’ but I loved this version.

My fave moment was when she put on the glasses and instantly reminded me of Madonna from the WTG tour in 1987 at the DYU, MG and LAV medley. Amazing energy this woman’s got, wow! After Music she left the stage quickly and we heard Beat Goes On very loud. After a bit of a fight with a French lady, we made our way out onto the streets. Here I sat down and checked my pictures and footage. After saying goodbye to Mark and Tony, the three half dead Dutchies crawled back to the hotel. Here we took a bath for our feet, which was much needed, Hans almost fell down in the bath. We checked our pics and finally went to sleep.

Woke up not entirely rested yet, my throat was so sore, then went to have breakfast. Checked the newspapers and there was only 1 with an article on the show. Hans stumbled upon the limited edition of Hard Candy at Virgin. We walked back to Gare du Nord and bought a vegetarian sandwhich at Subway. We then got back on the Thalys that brought us back to Holland.

It was great seeing Madonna again finally, and the show truly was very good, not really a surprise with such great songs. I am very happy that I had the chance to attend this exclusive gig and truly cherish it. However……I will never ever queue that long ever again (27 hours!) An Italian guy that did choose to stay stuck in the queue all day ended up enjoying the show next to me! Sometimes being in a queue has its advantages but sometimes it does not, this time it didn’t. But we did end up with a great tan though!

And now……let’s start saving for the Sticky & Sweet tour!