Hans and me were in the car already at 5am on our way to Berlin. To me Madonna and Berlin are a golden combination. On June 22 2001 I saw Madonna in person for the very first 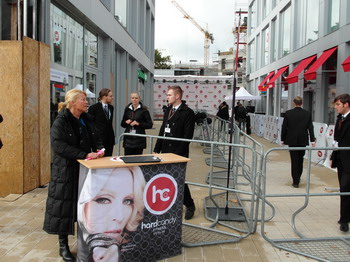 time during her Drowned World Tour…MAGICAL, the most surreal night of my entire life. In 2008 Hans and me enjoyed the Sticky & Sweet Tour in Berlin from the front row, it was our fave show of that tour. In 2012 we once again made our way to Berlin by car for the MDNA Tour, again an incredible experience. And then…..Madonna in Berlin for her Hard Candy Fitness. We couldn’t let this pass us by, we had to go!

The trip went well, underway we did get a check by police, they wanted to know if we were carrying cigarettes or alcohol. That we didn’t, but we did bring a whole lot of other junk, but police 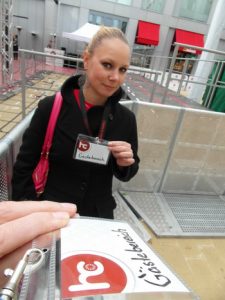 wasn’t interested in that. When we arrived at our hotel in Berlin we found out we were heading for a very quiet night; our hotelroom was right next to a cemetery.

We arrived around 1.30 at the Hard Candy Fitness in Berlin at the Clayallee. What an impressive setting! The Hard Candy Fitness promo vans were spotted and there were posters everywhere. Fans were already waiting at the gates. We spoke to employees of the Fitness, they tokld us to come back around 3 to pick up our guest passes. Perfect timing as we almost fainted due to an empty stomach, we needed to eat! How amazing that in Berlin you have the tastiest vegetarian burger at McDonalds! Not the crap you can get in Amsterdam.

At 3 we arrived back at the Fitness and received the guest passes. We got to enter the guest area right next to the red carpet. We were the first ones there, fans would be let in a while later. I noticed that the great weather had made a drastic turn and dark clouds were heading our way. I told Hans it would be a good idea to pick up the umbrella from the car, thankfully he was allowed to leave the area for a bit. For two hours we enjoyed the setting up of the event. The red carpet was still covered in plastic, the tents were being set up (so M would stay dry when she arrived). Lamps were being set up (they were nice and warm) and genteleman were busy scooping up the water that had already fallen down on the carpet.

Around 5 the fans were let in the area, and as usual it was chaos. We were standing right next to the press area, so of course that is where the fans wanted to be as it gave you the best view when she would pose for a picture. So it became a bit mad, the pushing and shoving I am used to but I will never learn to love it. Unfortunately not long after that it just started to pour, I have never been happier with our umbrella than at that moment. This was the least great part of the day; being stuck in the cold and the rain. There was a DJ that entertained us with hits by Madonna, Robin Thicke and Daft Punk. We heard that the event would start around 18.00, and that M would appear somewhere around 19.00. Surely you know, that 19.00 actually means 20.00 in Madonna time :o)

Nicole Winhoffer was the first to walk the red carpet, she took a lot of time to speak to the fans

and take pictures. Everthing did ran a bit late and I had completely lost my original spot right by the gate due to the pushing and shoving. Someone asked Hans to take his umbrella down as it was blocking some people’s view. Kind of a strange request if you know that it was pouring rain and there was still nothing happening on the red carpet. The plastic on the red carpet got removed, it was almost time! When we spotted the management on the red carpet, we knew it was time! Hans had already made up his mind that he wanted his arm signed by M. I was still in doubt whether to sign my arm or my MDNA Tourbook that I brought. But I had the wish of her signing my arm for a decade now. We made the deal that when M came over, he would stand sideways so I could claim my original spot back.

The screaming started……meaning that the Queen had arrived! Liz Rosenberg en the management were already walking up and down the red carpet, and before we knew it M already came our way. You can guess that the pushing had reached the highest level at this point. People were throwing pictures and books in front of my face….chaos! Then suddenly there she was! Everytime (and I know I write this every single time in my r 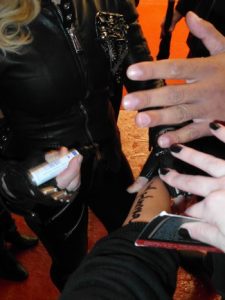 eports) I am absolutely starstruck. There she is in all her glory. The woman I became a fan of after I saw Truth Or Dare in 1991, the woman with the biggest balls no man I have ever met owns. THE Madonna, the one and only, no words. She was right in front of me, and then you forget everything around you; the pushing, the pulling, the fans, the yelling. On that moment it is just you and her. Gosh….she is so small, her eyes are amazing, god she looks GOOD!!

Hans had his arm out and Guy Oseary spotted this, directly he said to M that she had to sign his arm as ‘he had been waiting so long’. M walked over and asked Hans how he wanted it….eh…well…. 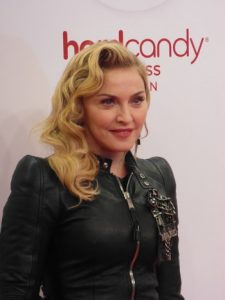 that puts you right back to earth, it is not every day that you have to answer MADONNA! Hans told her that it didn’t matter. She really took the time to write it down and Guy ordered the people around him to NOT MOVE. When M was done, she quickly signed a photo and then walked away. I thought to myself ‘NOT AGAIN’, am I missing out again?! I missed out on getting her autograph on my arm in 2004 when I first met her in Selfridges for the singing of her book Adventures of Abdi. She did sign my friends’ arm there and not mine, as she misunderstood my question. Ever since I carried this wish with me at every single M event.

I yelled at Guy who was right in front of me just to get his attention. I never noticed that Sara already made her way over to me. Hans yelled at Guy too and then suddenly he spotted me, nodded that he’d seen me and walked over to M. M was about to walk over to the press to have her picture taken and do some interviews. But Guy told her she needed to sign just one more thing. From that moment on I was in complete shock. I saw how Guy grabbed her arm and brought her back to me. Sara stood right next to me and pointed at me so that M wouldn’t walk over to someone else. Suddenly she was right in front of me, grabbed my armd and started to write her name. The sober girl that I am, just burst into tears right then and there. I just couln’t believe what I was experiencing, I was so impressed that the emotion just overwhelmed me. When M finished writing she looked me right in the eye, I uttered a Thank You, she smiled and walked on. Sara (bless her heart) comforted me. Then the realization hit. I didn’t notice the fans anymore, the pushing, the shouting, physically I was there but mentally I was in heaven. I looked at my arm in amazement and saw THE name…..we did it! Those were the only words Hans could utter ‘WE DID IT!’. After that Hans shouted a few ‘FUCK YEAH’ to M who was on the red carpet doing interviews and pictures.

When M went inside the Fitness, the calmness returned on the red carpet. Almost immediately someone from German radio was there to interview me. I tried to answer his questions, but when he asked me for my age, I had NO idea what my age was….I was just in a state of shock. I first wanted to wait a while outside the Fitness, but I was so happy, so fulfilled that I just wanted to do one thing and that was to call everyone I knew and announce it on social media. You can understand how happy we were to learn that our moment had been captured on film and was on YouTube.

We did not sleep until 2 in the morning, the adrenaline pumping through our veins was just too much. 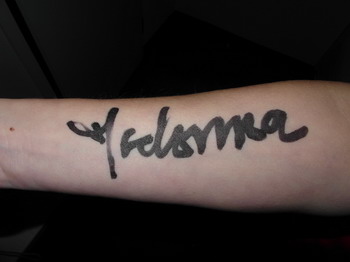 After buying German newspapers we went on our way by car back to Amsterdam. Of course the signature had to get tattooed today, and where else better than at Tattoo Solution (aka Bianca’s Tattoo Solution in Hilversum). It is for a reason that Bianca has quite the waiting list, she is without question the best in what she does. She has tattooed my American Life tattoo in 2009, and redid my portrait that I had originally done in 2004. Thankfully Bianca was aware of our signature wish, and managed to put us in between

appointments. Instead of going to Amsterdam, we made a stop in Hilversum first. 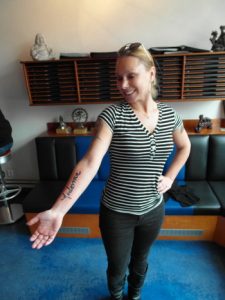 Halfway we made a wrong exit and drove somewhere around Hannover in the middle of the country. We arrived at Bianca’s right on time and after eating something (you gotta eat before you get a tattoo done) it was my turn. The pain was bareable, but yeah it did hurt. After this it was Hans’ turn and his signature became permanent. After this we had to race our way to Amsterdam to pick up my dogs from the shelter. No moment to rest for me, had to go and see Afrojack that evening.

I still cannot believe that it finally happened, nine years after I first asked her to sign my arm. I am still so overwhelmed by how M’s management helped me, just still in shock. What an adventure, once again Madonna and Berlin were a golden combination.

I want to thank a few people for this incredible experience: Linn, Madonna’s management (you are incredible) and of course the one and only M…..there is and never will be anyone like you! 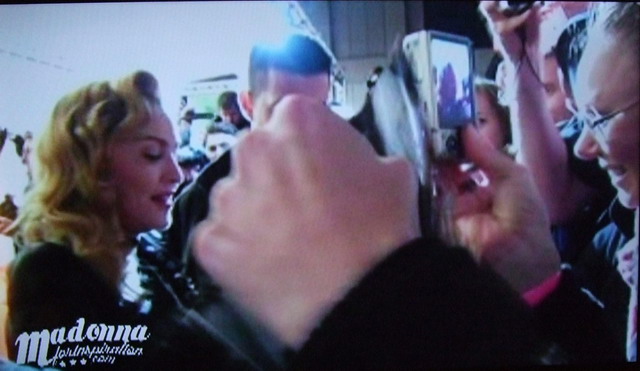