The shows for London went on sale in April and were sold out extremely quickly. I tried through some agencies and some internet sites to buy tickets, but no such luck. A friend of ours who lived in England at the time but was going to immigrate to Canada, told us he had managed to arrange 2 tickets for Madonna’s performance on July 4th! He also said that the tickets would be their wedding present to us, but were also sad that they couldn’t attend themselves. I was just stunned, I knew how much the tickets cost, and just knowing I was going to see her again, and for free thanks to a dear friend, I was just the happiest guy in the world. It was going to take a while but at least we got to see the show!

The tour started a week later in Barcelona due to technical problems in Cologne. I read some reviews and saw several pictures, I was extremely anxious to know what the show was going to be like. It occurred to me that she played a lot of her new material and just a few old songs. But that didn’t really matter to me as I thought that the new material was amazing, like Madonna says herself she never repeats herself! Just knowing Madonna would be there in front of me playing guitar, oh momma make me crazy!!

We took a plane to London today, trip went very fast and landed before scheduled time. Went to our hotel at Tottenham court Road, our hotel room was ready and very warm. The weather was amazing! We then went into town and I asked some ticket agencies about Madonna tickets, and was told that the lowest price was 350 British pounds. Of course I immediately walked away. In the evening a premiere is taking place at Leicester Square of Lara Croft & Tomb Raider, it didn’t ring a bell and rose no interest. We didn’t make it a long evening, wanted to be in good spirits for the show tomorrow!.

I was awake at 6 AM and couldn’t sleep anymore, maybe because of the heat? Maybe because I was seeing Madonna today? I then remember the days of Blond Ambition and The Girlie Show, I knew then around this time I would’ve been at the stadium already. But luckily this time I don’t need to as we all have seating tickets, it feels a bit strange to me. After breakfast we head to Earls Court just to see if there are people already. When we get there, there is absolutely no one there! Extremely gorgeous billboards are displayed on both sides of Earls Court, of course I have to take my pictures! 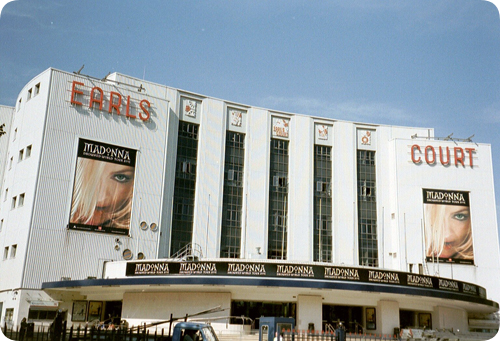 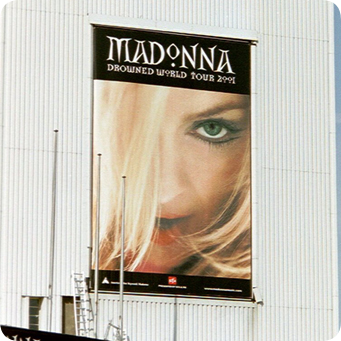 We then went back into town and did some shopping. At HMV I found the ‘Music’ Mini disc and that was the only thing that I bought. We then sat and we ate, we did some sightseeing and all that. Still I am looking at my watch every ten minutes, I just can’t seem to relax. After we have dinner we go back to Earls Court. When we arrive we see that it’s a lot more crowded than this morning. There are people around yelling that they want to buy tickets no matter what the price is, but I don’t really give a damn. Peter however was already thinking he might be rich by the end of the day but I carry the tickets with me and he is obligated to go and see the show with me, whether he likes it or not.

When we enter we see the merchandise booth with tour books and shirts and all that, but gosh she is expensive! The tour book is 35 pounds and when I buy a keychain a belt and some shirts I have to pay 150 pounds all together! Peter looked at me like I was some kind of nutcase while paying this much for these items. Then we decide to check out where our seats are actually located at, Block 7, Row S. The seats are on the side of the stage and aren’t too bad, so we settle down. At around 9 the light went off and the show’s about to start. TV screens are turned on and there’s lots of fog and in the middle of the fog, Madonna comes forward! She sings ‘Drowned World’ and her hair is straight and she’s wearing a Scottish kilt. Her voice has truly grown since doing ‘Evita’. I scream and say to Peter ‘she’s on stage!!’ to which Peter replies ‘ehm…..yeah….I can see that’. I laugh and go crazy!

With “Impressive Instant” I just don’t know where to look, there is so much happening on stage. It’s amazing to see Madonna playing guitar during ‘Candy Perfume Girl’ (even though this isn’t a favourite song of mine) and I just love her ‘Fuck Off MotherFuckers!’ at the end. Of course I know now that she’s sure to make some headlines because of this, LOL! Beautiful Stranger is just a lot of fun and so is Ray Of Light. The geisha section that comes next is breathtaking, we’re now looking at a Japanese garden. We see ‘Frozen’ and ‘Nobody’s Perfect’. She starts off ‘Mer Girl’ slowly which mixes into an amazing ‘Sky Fits Heaven’, she jumps from the tree and starts to fight with her dancers. The audience goes crazy and loves it! After the geisha section, Madonna comes up from under the stage with guitar to play ‘I Deserve It’. She tells us ‘Normally I just go into this song, but I would like to dedicate it to someone special. I’ve waited many months to be in the city where he was born. This song is for my husband!’ Then she adds ‘Goddammit it’s good to be here!’. I just loved this performance. Of course she got the whole audience to sing along with ‘Don’t Tell Me’.

We watch Madonna riding a mechanical bull during ‘Human Nature’ and then we get to hear ‘The Funny Song’. When she walks up the little steps to start the song, she misses a step which makes her almost fall down on her butt. She immediately says to Donna and Niki ‘Goddammit did you see that?’. After ‘The Funny Song’ she performs ‘Secret’ with guitar and then we get an amazing ‘Gone’. One of my fave performances, she’s so amazing! We then are treated to the Spanish section and Madonna looks stunning while she sings ‘Lo Que Siente La Mujer’. La Isla Bonita is beautifully performed with lots of Latin and Tango and of course the guitar. We all go crazy and we love it, M looks so much like Eva Peron. Then Earls Court goes crazy when ‘Holiday’ starts, she creates one big giant party. ‘Music’ is the last song to be performed and if there were people still sitting down, they’re now all on their feet. I try to see everything that is going on, but it’s just too much. There’s a bunch of gold confetti and lots of images of M on the screens. And then the show is well and truly over, the lights go on and we’re exiting the building. Outside I tell Peter to hold on, I need to sit down and think of what I just saw, it’s like a train has just run over me. On our way back we buy a poster with the Earls Court date on it.

Today of course we bought every newspaper mentioning something about last night’s show. What occurs to me is that she’s getting rave reviews (unlike the previous tours) and that no one was offended by her ‘Motherfuckers’, they’re even headlining her quote ‘Goddammit it’s good to be here!’ We then go into town and walk through Hyde Park, then later go to the airport and fly back to Amsterdam.

Hopefully it won’t take another eight years to see her again!