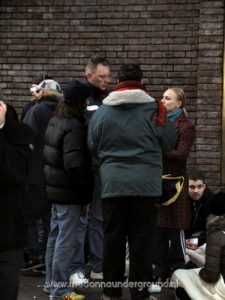 Right now I am back from London with both feet on the ground after a short but at the same time extremely long weekend in London. Last Friday we didn’t arrive at our hotel until midnight. I contacted Simon and 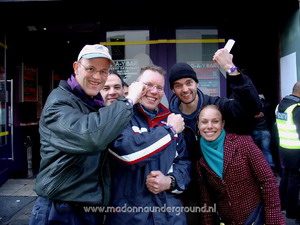 Kimmy who told me they would be taking the first tube to the G-A-Y bar the next day to queue for wristbands. So we decided to sleep for a few hours and get up at 5 in the morning. Peter wasn’t looking forward standing in the queue at all, especially when it was still cold and dark outside. When we got to the G-A-Y bar we saw that we were certainly not the first to arrive. There were two separate queues, one for the regulars of the club and got to buy their wristbands first, and the other queue for the non-regulars (which means: us). We got to buy our wristbands after the regulars got theirs, this could take a while as their queue was just enormous. Our queue became longer and longer by the minute. Even though it was very cold outside we still had a great time. Later on we heard people applauding, which meant that the sale of the wristbands for the regulars had started!

We were being pushed a bit forward so we were just a couple of metres away from the door. Then some people thought they were being smart and entered the queue behind us, without having queued since this morning!. We tried telling them that it is not OK to jump the queue! They wouldn’t listen to we called security, they didn’t do anything about it either. One of the two people walked away ‘Yes, one down two to go!’ Finally it was our turn to go inside and buy our wristband, we went up a stairs and entered a room where people put on the wristbands and we paid our 20 quid per person.
AAAAAH! We’re in! We told Jeremy about the lady jumping the queue and he then told her to fuck off, justice had been done!

When we got outside we decided to go and do some shopping as it wasn’t until 10 tonight that we would enter the G-A-Y club.

But after a bit of walking Peter told me that he really needed to go back to the hotel, as he was about to collapse from exhaustion.

We then slept for about two hours. We went to have dinner around 6 and did some shopping again. 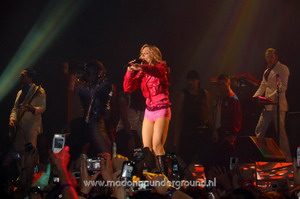 We were going to meet with Kimmy and Simon at around 10 and then head over to the G-A-Y club. When we got there there was another queue.

But this one went very quickly and we were inside within minutes. The club was already packed with people and it took quite a while before we could put our stuff in the cloakroom. Then we went down to the floor and tried to get as near to the stage as possible, and it worked, we were front row on the right side! Peter stayed in the back so he could make pictures. The stage was very tiny and there was an image of Madonna displayed on a screen. We listened to ‘Who’s That Girl’ which was stopped abruptly because it was time for Madonna’s performance!

We saw the band appearing on stage and Stuart Price was right in front of us, then there was the sound of the ticking clock! The screens in the back opened and there she was, all dressed in pink MADONNA! Everybody screamed and jumped, and oh my god hundreds of cell phones rose up in the air to take pics of her. After ‘Hung Up’ she told us that her performance at Koko was just a warm up. She was sooooooo close by and during ‘Get Together’ she sat down in front of us and you could clearly see the diamonds above her eyelashes. What an amazing body, you could fall in love with it instantly. ‘Do You Like my new album?!’. ‘YEEAAAAHHH!’, ‘I made this record for you fuckers!’ The next song was ‘I Love New York’ and she told us that New Yorkers just go for it and that we (fans) have the same intentions and that she loves London too.

‘Let It Will Be’ was the fourth song performed in a new remix. Believe me the album version is great but this remix was even so much better! Madonna closed the show with ‘Everybody’, all the dancers come back and together with Madonna they dance their asses off for us. A bunch of balloons come down from the ceiling and it seems that Madonna isn’t too happy about that.

When she almost ends ‘Everybody’ she surprises us by singing a bit of ‘Jump’ WOW! I jump a little higher and scream just a little louder. And then it’s over and Madonna’s gone!

WOW! What a night, what a show, and how close were we?! I wouldn’t have missed this for the world. We then went to get our jackets, it’s around 1 in the early morning and we have to go back to our hotel. Once outside we try the bus, we try a cab, but nothing works, so we decide to walk back to the hotel. Around 2:30 we arrive in our hotel room, very tired but very pleased as well!