After the release of my favourite album ever ‘American Life’, Madonna was coming to Europe to promote the album. We already enjoyed the MTV Special ‘On Stage and On The Record’, but of course we wanted to see her in person again too. I managed to get tickets for Madonna’s first promotional event in Europe. This was a TV show in Cologne Germany titled ‘Absolut Madonna’, the entire show would be dedicated to her, and she would be there too. At first I couldn’t get tickets through ordering them at the German organisation. So I bought tickets from a man in Germany that had two spares. A few days later I received a call from Wolff who worked at the German TV studios where the show was being taped. He managed to get me three tickets to the show! I was really very happy because now I had tickets for my friends as well.

The day had arrived, after sleeping for only 15 minutes due to nerves, we went by train to Amsterdam Central Station. From here we jumped on the ICE Train, we had great luxurious seats and our carriage was almost empty so we had lots of fun. After 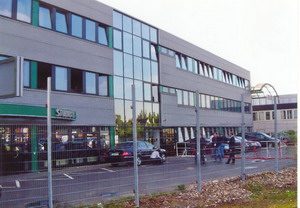 three hours by train we arrived in Cologne and went to the studio’s. It was around noon and I was literally falling asleep while walking. I realized that I really needed some sleep, it felt like I was floating instead of walking and my head wasn’t clear at all. Some friends offered their hotel room to us so we could catch some sleep. We gladly accepted their offer and managed to sleep three hours.

Around 3.30 in the afternoon we were back at the studio’s and there were a lot more fans now. Unfortunately I heard that I had just missed Madonna’s arrival, but hey it was either sleeping elsewhere or falling asleep at the studio’s. We were one of the first to enter the studio, but because I had returned tickets I wasn’t on their list. So then Wolff (production) came to the rescue. He got me my tickets and we could finally enter the lobby. I had just bought a hotdog when I heard that we could enter the studio where the show was being taped. So the hotdog found a spot in the bin very quickly and I rushed to the entrance doors with a friend. When we got in we ran to the seats at the very front row of the tribune. We were too late to find a spot on the stage itself, but we were now front row of the seats right in front of the stage where she would perform, so that was good enough for me!

And now we just had to wait, the show was hosted by Oliver Geissen and he just kept on talking in German of which I didn’t understand a word. Several little compilation clips were being shown on a large screen about Madonna. When a favourite video of Madonna was shown everybody in the audience cheered, it was a lot of fun. There were also some German guests who were unknown to me, they were interviewed about Madonna. Finally I saw Madonna’s band enter the stage. And then I saw her, the lady M!! She was standing backstage talking to somebody from the show. When she entered the studio, everybody around me just jumped up and started to scream and cheer. 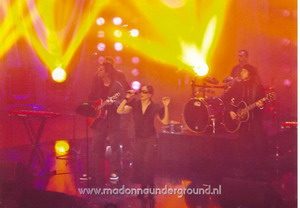 She looked absolutely gorgeous, wearing a black hat with a green ribbon around it, tight pants, black boots en black shirt. ‘American Life’ was the first song performed, at first I was a bit let down that she mimed the song, but still I was going nuts and sang a long to each word. I screamed the ‘fuck it’s’ and the rap with her as loud as I could, it was great! After ‘American life’ Madonna wanted to continue with her second song ‘Hollywood’ but the German TV crew thought they were going to do the interview first. MISCOMMUNICATION!! So there was no music, and Madonna was just standing there waiting. She got a little pissed off and just sat down on the stage and looked at her fans with an expression you wouldn’t believe!! It was hilarious. When a woman from the crew walked over to her to talk to her about the problem, they settled it and ‘ Hollywood’ finally started. Madonna danced her ass off and sang a couple of lines in my direction and I happily sang everything along.

Right after ‘Hollywood’ we heard the first seconds of ‘Music’ and this time Madonna was going wild! This performance rocked, but even now Madonna forgot to mime some words, which was very funny. After ‘Music’ everyone in the audience was soaked with sweat and all hyped up. Madonna was presented with an award for ‘American Life’, and Mirwais seemed to be more pleased with it than Madonna was. She then went backstage to get a touch up. After she walked over to the other stage where Oliver Geissen would be interviewing her. The interview to me was extremely boring, because Madonna’s voice was being overdubbed live, we couldn’t hear a thing of what she was saying. Also the camera’s obstructed our view constantly. After about 20 minutes the interview was over and Madonna said her goodbyes.

We were allowed to leave the studio as well and went outside to see if we could see Madonna depart. When she came out we couldn’t see a thing, it was way too dark. We grabbed a cab to the airport of Cologne because we had an early flight to London the next day. We decided to spend the few hours we had left on the airport sleeping on some benches.

Once we arrived in London we went shopping as usual, we tried to get into the Jonathan Ross taping but unfortunately didn’t succeed. Attended the taping of a very boring TOTP episode instead. May 2nd was the day of CD:UK!! We were already waiting outside the studio since 11am. The guestlist of this special taping for Madonna only had 200 people on it. Luckily we had our friends with us so time passed by very quickly.

Madonna arrived an hour before the doors would open for us, in her well known black car. We laughed as we waved to the dark windows, we couldn’t care that we didn’t see her. We knew she was in that car, and we knew she saw us! When the doors finally opened and our names were checked on the guestlist we entered the teeny tiny studio. We found an excellent spot right at the front on the right side of the little stage. The crew had put up two huge billboards of the American Life artwork on both sides of the stage, that I really wanted to take home. The band arrived quickly and entered the stage. I was feeling very cheerful so when Monte passed me by I said ‘Hi Monte!’ He surprisingly turned around to face me, smiled and said ‘hi’ back. I was absolutely loving the spot I was in, I was standing exactly next to the two step stairs that Madonna had to use to get on the small stage. So she literally had to pass me by to get on it. 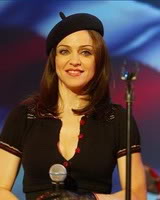 When I looked at the entrance door through which we had just entered the studio, I saw Madonna walking in! She looked absolutely breathtaking, black beret, very small black top, and very high tight black fitting trousers. I have to say, although I am saying it a lot, that I had never seen her look more beautiful than she did right there in front of me. Caresse Henry and Madonna’s assistant were standing right next to her. Caresse looked at me, so I just decided to smile at her, she smiled back. And then yes I had a deja-vu! Madonna looked at me too, but this time she seemed to stare. She has the most remarkable eyes, they’re very extraoridinary, but really beautiful. She continued to stare until she closed her eyes and it seemed like she was meditating. Suddenly this security guard came to me and pushed his stomach into mine. And yes Madonna walked to the tiny stage. Then she literally stood next to me waiting to enter the stage, I couldn’t believe it! I was now standing next to my idol, and the craziest things struck me. Like how she really was smaller than me, that there was fluff on her shirt, and that she had a really nice perfume on.

Then she walked up on the stage and everybody just cheered and was amazed by how good she looked. Here in the spotlights she was just gorgeous! She was also so much fun and made jokes. Somebody said something about her shoes, so she pulled up her trousers so we could all have a look at her to die for red shoes. A friend of mine yelled at her ‘You look stunning baby!’, to which she replied ‘thank you baby!’ After she was introduced they started with ‘American Life’. And again we just went crazy, also Madonna was having a good ol’ time. It was really out of this world to witness such a special performance in such an intimate setting.

After ‘American Life’ Cat Deeley interviewed Madonna shortly and then they played ‘Hollywood’. Madonna had taken off her beret and was looking even better! During ‘Hollywood’ she just kept on dancing and jumping, such energy! After this performance she spoke a bit more to the audience and with Cat, she also confirmed a tour for next year (2004). I didn’t really believe her as she promised tours in the past before (but boy was I wrong this time). She chatted some more with the audience and Cat, then said goodbye. She had to walk right passed me again to leave the stage, my boyfriend tried to show his tattoo to her, but sadly she found the floor more interesting.

After the performance we left the studio on a high, we also waved to Madonna when her car drove off. We were very happy as it had been a very special day for us and Madonna had been lovely. We went to the shops and bought the ‘Die Another Day’ DVD which had been released that same day.

The next day the performances were already shown on TV, it was so great to see it again! But the thing that disappointed me was the fact that they cut some of Madonna’s jokes and chats with the audience. Thought it was very funny that you could see glimpses of me standing next to the stage, I recognized my blue pants. It again had been a wonderful Madonna adventure. Too bad that we couldn’t attend Madonna’s gig at HMV the week after due to work commitments. But still this year had turned out to be excellent so far, it delivered her best ever album and she was looking better than ever!