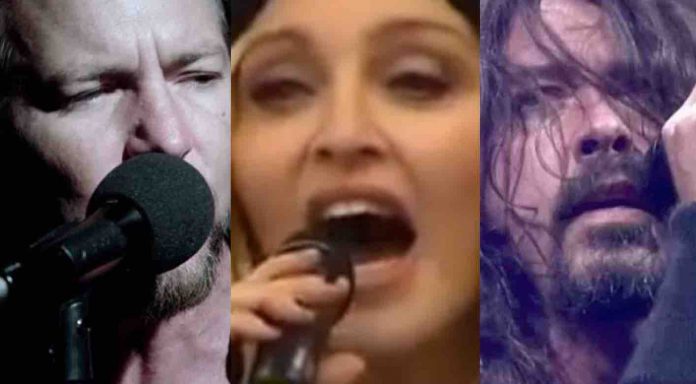 Candlebox frontman Kevin Martin was recently interviewed on 5 Questions With Tommy Black, and he revealed that Madonna showed up at a Pearl Jam concert featuring Eddie Vedder at the height of his fame that Foo Fighters frontman Dave Grohl was also at along with a legendary Grunge band. Alternative Nation transcribed their comments.

“I remember it was a pretty full room, I was there with Guy [Ritchie] and Madonna had come in. It was a pretty crazy night there.” Martin and Black then discussed how the Madonna meeting went further. Scott Weiland was also involved in the Pearl Jam show that Madonna was at.

Black:  On the Guy [Ritchie]/Madonna thing, now you were signed to Maverick which was Madonna’s label. Tell me a little bit about that?

Martin: Well for us there were the first label to come to the table.

Martin: Well that’s not true, we had been invited by EMI-SPK and I think their biggest band at the time was Pulp, that’s when Fred Davis was running SPK. They invited us down and we played the Club Lingerie in October of 1992 and I was told he’d see us play by his attorney. Fred Davis didn’t show up but Guy [Richie] did and said I want you to meet Freddy and Abby? [second name I can’t hear] Two days later they set up a meeting with us at the old Hollywood Regency which is now an apartment building on Hollywood Boulevard just west of Fairfax and that was the beginning of it for us. We signed a contract that December, started the record in the spring and it came out the twentieth of June of 1993 and the rest is history.

We really didn’t get to know or meet Madonna until 1994. Like I said, she came to the Viper Room gig and the Whiskey Room gig that we played but we didn’t spend time with her. It wasn’t until New York with Rush, Madison Square Garden in April of 1994 that we actually got to sit down and have dinner with her – but, amazing label dude.  We were the first band and we had been approached in Los Angeles once everybody had found out we were signing with Maverick – Geffen called, Capitol, Island, etc.